Sean Hannity Buys Art Masterpiece For Donald Trump, Just As Classy As Anything Else Trump Owns 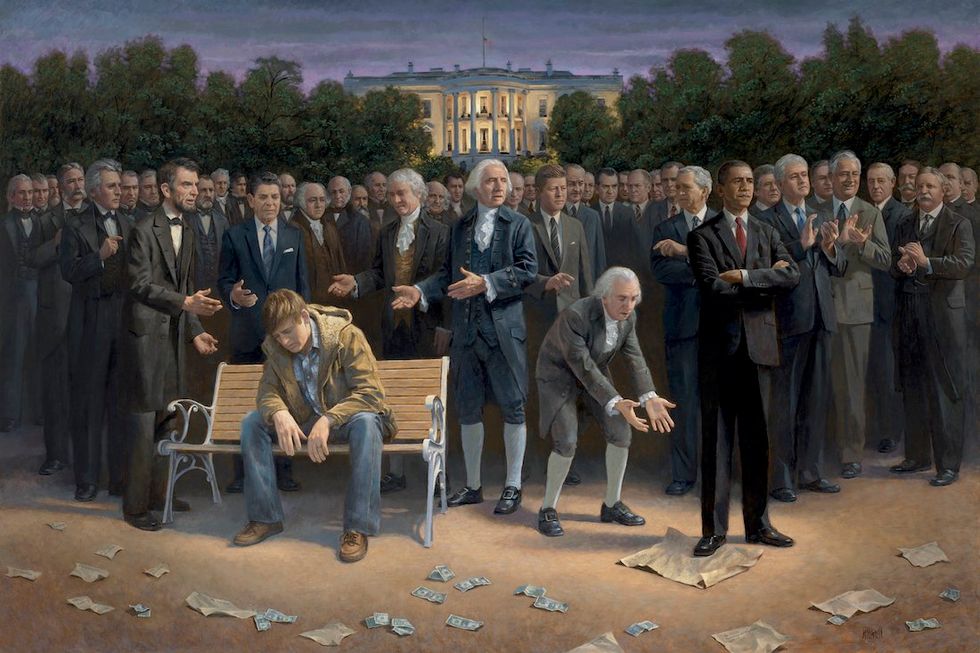 Next: Unleash the Precious Moments figurines!

Great news, America! Jon McNaughton, America's Greatest Artist (after whoever came up with the chrome nekkid-lady mud flap silhouette) has an important announcement on the Tweetors machine! Looks like thanks to Sean Hannity, president-elect Trump will already have some super-classy art to hang in the White-Again House:

McNaughton, you'll recall, is the Great American Artist who gave us such brilliant hits as Jesus Gives the Constitution to George Washington and Barack Obama Burns The Constitution Because He's Satan. McNaughton also wrote a teen-adventure Jesus fanfic that was so bad we had to review it in two parts to do it justice. So this gift to President-elect Trump, McNaughton's "The Forgotten Man," is fucking golden, and we bet McNaughton didn't just give it up for fucking nothing, unless of course Hannity didn't buy the original, but instead went for a print (available at JonMcNaughtonPaintsLikeAnIdiot.com). Update: A callback from McNaughton's gallery said Hannity had purchased "an original," not a print. Here's McNaughton's not at all overwrought description of his 2010 masterpiece:

Against the background of a darkening sky, all of the past Presidents of the United States gather before the White House, as if to commemorate some great event. In the left hand corner of the painting sits a man. That man, with his head bowed appears distraught and hopeless as he contemplates his future. Some of the past Presidents try to console him while looking in the direction of the modern Presidents as if to say, "What have you done?" Many of these modern Presidents, seemingly oblivious to anything other than themselves, appear to be congratulating each other on their great accomplishments. In front of the man, paper trash is blowing in the wind. Crumpled dollar bills, legislative documents, and, like a whisper—the U.S. Constitution beneath the foot of Barack Obama.

He goes on like that for a whole page, and insists it's not partisan, because look, he has Nixon, Ford and both Bushes with the Bad Presidents, so there. This fine art so moved Sean Hannity that he even featured it in his opening radio-show monologue the day after Freedom Was Restored To America last Tuesday:

No, we couldn't really listen to the whole thing either, but Hannity finally gets to the painting at the 8:30 point, sort of. Or not. He rambles all over the place, but he really loves the painting, which shows how Americans have been betrayed, and that's why Trump happened. The Forgotten People all stood up and said no to the Globalist and party elites, and hooray for America!!! Then it's more bullshit Fox Newsified economic stats about how everyone is poor now and the recovery is a fake, and somehow this painting communicates that. As art criticism, it's a bit less thorough than Yr Wonkette's discussion of the piece in 2010:

We don’t even know if we can blog about this painting. It might be too controversial.

Also, too, we hadn't realized until reading the gushing replies to McNaughton's tweet ("IMO this belongs next to Rockwell in the American Museum of Art") that the central figure is pretty much stoled from a 1934 painting, also titled "Forgotten Man," by Maynard Dixon, which was also political, but didn't have a president in sight, much less an imperious Muslim Usurper stomping on the Constitution:

That one's in the Brigham Young University Museum of Art, a detail you might think McNaughton could have mentioned in his description of his inspirational kitsch. You see, McNaughton studied art and design at BYU and almost certainly had to be familiar with the original, which was more New Deal Social Realism than rightwing glop. No matter. If Trump can recycle "America First" from our 1930s fascist movement and "Make America Great Again," the "Silent Majority," and "Law and Order" from Richard Nixon, then there's no reason a Great American Artist can't borrow a little too. We can hardly wait to see Melania Trump reinterpret this fine art as a caviar-based skin cream.