Sean Hannity Steps On Dick And Eats It: A Play In One Very Short Act 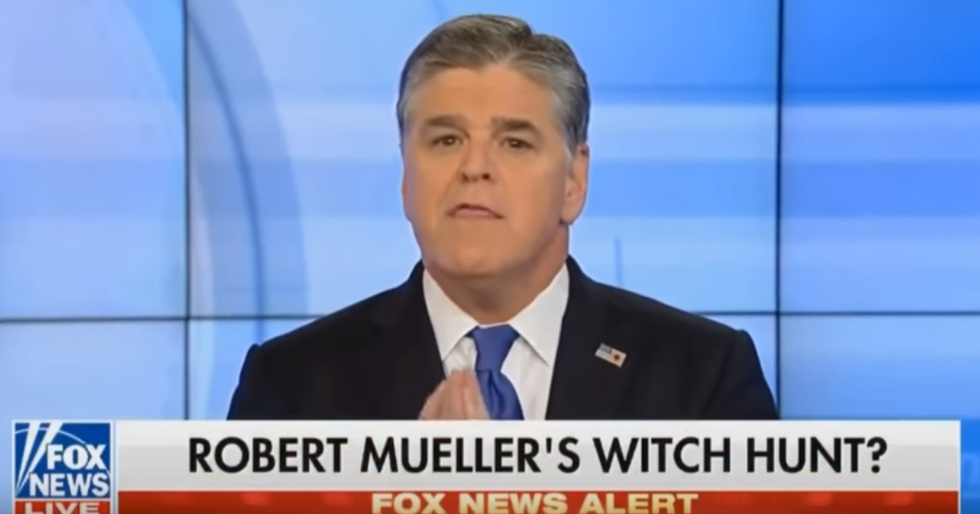 You eat your own dick with that mouth, Sean Hannity?

A little while ago, in our post about all the different ways Devin Nunes and Fox News and the rest of the GOP are obstructing justice for Donald Trump and undermining the Robert Mueller investigation, we mentioned that Attorney General Jeff Sessions, FOR SOME REASON, is having his prosecutors take another look at the FBI's investigation into whether Hillary Clinton emailed any uranium to Russia five years ago. It is a very stupid thing to look into, considering how it's been debunked as a "scandal" since forever. But hey, it has the words "Hillary Clinton" in it, so it gives Fox News types the sort of morning wood that gets them through their day.

Well, when the story of Sessions doing that hit the news reels, Sean Hannity jizzed so hard he blew a gasket in his panties. In fact, he was jizzing so hard and blowing so many panty gaskets that he failed to note he was also stepping on his dick then eating it for lunch. Fuck it, let's watch him do it live!

YEAH, NBC, READ AND FUCKIN' LEARN. And where will you be reading and learning, Fake News Conspiracy TV NBC, if that is even your real name? Looks like you'll be READ AND LEARNING at NBC News Dot Com, because it would appear you, NBC, broke the story, the one you are allegedly ignoring and need to READ AND LEARN about.

Of course, if you READ AND LEARN the article, you see that Sessions isn't appointing a special counsel or anything. It merely appears he is appeasing House GOP idiots and doing what he said he would when he testified recently, that he'd be sure to look into the Hillary uranium thing, you betcha scout's honor good lord willin' and the crik don't rise. Look at Jeff Sessions! He's lookin' into it!

And no, we are not defending Jeff Sessions's motives. You never know what kinda secret plans he's hiding underneath his overalls. We are simply saying Sean Hannity has ruined another perfectly good pair of pants, allegedly and for no good reason, and maybe he should READ AND LEARN the article again before he takes another bite off of his own dick.

Because it's funny, we are going to re-paste some funny tweets Mediaite found, of NBC and MSNBC journalists pointing and laughing at Sean Hannity, who really needs to READ AND LEARN: