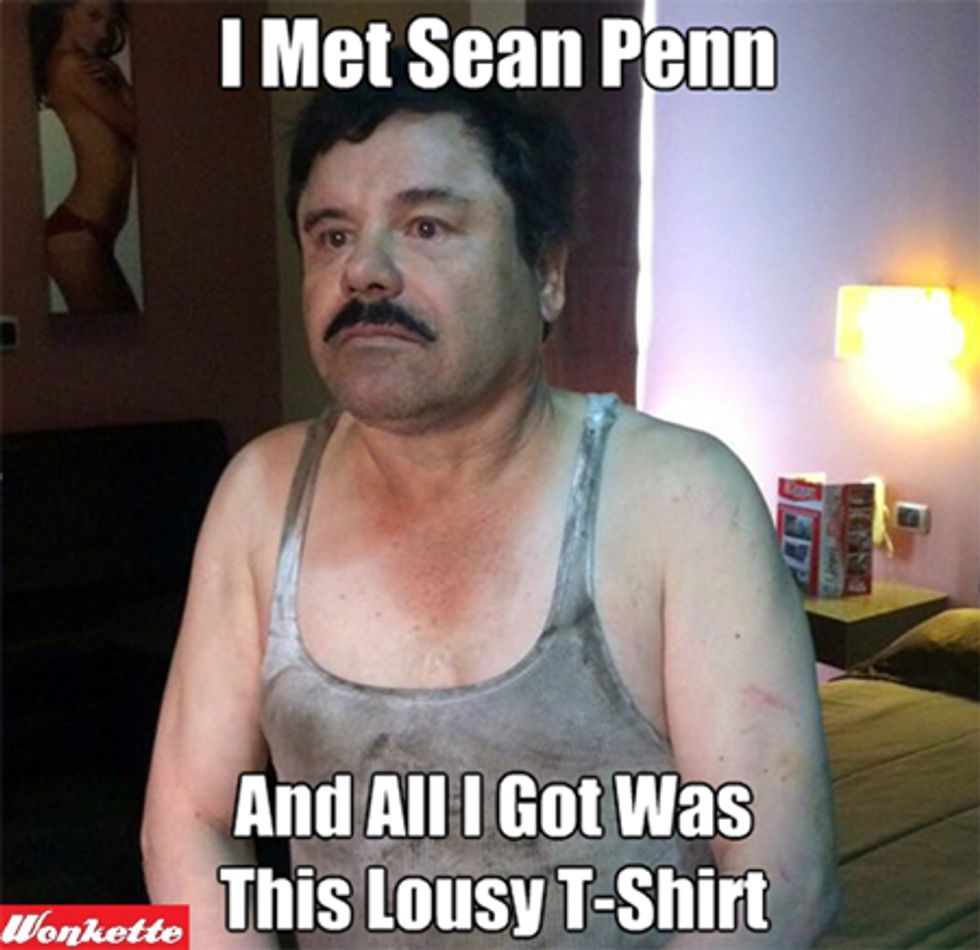 Why are bad guys always captured in dirty sleeveless undershirts? WHY?

Of all the people we'd expect to be involved with the arrest of the world's most wanted international drug lord, "Sean Penn" was pretty low on the list, below "David Tennant" (but way above "Bill O'Reilly"). And yet Penn's strange, only slightly self-aggrandizing interview with Joaquin "El Chapo" Guzmán for Rolling Stone really did help lead to Guzmán's recapture last week, according to two "senior Mexican government sources" who spoke to Reuters. Yes, speaking under conditions of anonymity, of course, so for the real story, you'll have to wait for the movie in a couple years.

Penn's Rolling Stone piece -- for which he gave El Chapo final approval, which is ... odd -- is worth a read, even if it sounds like Sean Penn trying to channel Hunter S Thompson at times ("Espinoza and I have traveled many roads together, but none as unpredictable as the one we are now approaching. Espinoza is the owl who flies among falcons"). In it, he explains how he played spy/investigative journalist to arrange a meeting with Guzmán somewhere at an undisclosed jungle compound in the mountains; mostly, it seems that Guzmán wanted to meet Mexican actress Kate del Castillo, who played a drug cartel leader herself in a popular soap opera, La Reina del Sur. Guzmán had been Hollywooed by many offers to film his life story, but he said he only trusted del Castillo to tell it the right way. Penn and del Castillo met up through a mutual friend sometime last summer after Guzmán broke out of a maximum security Mexican prison (which set a new lowered bar for maximumness), then set off to meet up with Guzmán.

Much techie security stuff ensued, as Penn puts it:

Although the idea of Penn and del Castillo making a movie in coordination with Guzmán turned out to be impractical, the drug lord nonetheless agreed to a magazine interview, and so off the two entertainers head to Mexico for the interview, aided by Penn's fixer friends identified only as "Espinoza" and "El Alto." Despite all the cloak and dagger stuff, Penn was certain he was being followed the whole time:

There is no question in my mind but that the DEA and the Mexican government are tracking our movements ... I see no spying eyes, but I assume they are there.

In an unidentified Mexican city, Penn and del Castillo were escorted to a convoy of armored SUVs, with nearby streets blocked off by Guzmán operatives; then a drive through the countryside, "cruising at well over 100 miles per hour." Yes, on rural Mexican roads, don't nitpick. From a dirt airfield, they flew in a small plane equipped with a "radar scrambler" to another primitive runway. The flight was low and fast, and "just bumpy enough that each of us had taken a few swigs off a bottle of Honor tequila, a new brand that Kate is marketing." Once the party was safely on the ground, we learn, Sean Penn had to answer the call of nature, and even that is adventurous and fraught with mortal danger:

I throw my satchel into the open back of one of the SUVs, and lumber over to the tree line to take a piss. Dick in hand, I do consider it among my body parts vulnerable to the knives of irrational narco types, and take a fond last look, before tucking it back into my pants.

If the inevitable movie doesn't include that scene, complete with verbatim voiceover narration, we're going to feel deeply ripped off.

Hours and miles and bajillions of words of description of the jungle journey pass, and Penn finally meets El Chapo, with a photo for the record, recaptioned here by Family Guy writer Chris Regan:

I see no more than 30 or 35 people. (El Chapo later confided to El Alto that, out of sight, another hundred of his soldiers were present in the immediate area.) There are no long-barrel weapons in sight. No Danny Trejo types. My impression of his crew is more in sync with what one would imagine of students at a Mexico City university. Clean-cut, well-dressed and mannered. Not a smoker in the bunch.

Penn suspects the nice-guy image is for del Castillo's benefit. Finally the seven hour interview, conducted through translators and recalled without notes or recording equipment, in which we learn that Penn "felt increasingly that I had arrived as a curiosity to him," and nowhere near as interesting to Guzmán as the TV actress. Nevertheless, Penn is out to do serious journamalism: "My only interest was to ask questions and deliver his responses, to be weighed by readers, whether in balance or contempt."

El Chapo, it turns out, is quite a charming thug: "As has been said of many notorious men, he has an indisputable charisma." He claims not to be interested in politics: "I keep my opinion to myself. They go do their thing and I do mine." Plus, maybe he owns a few, too, though he declines to show Penn his collection. Guzmán is pleased to know that Americans know who he is, but not impressed by the low profit margins of TV and movies compared to drugs. He's also unimpressed by Penn's highminded principles:

"How much money will you make writing this article?" he asks. I answer that when I do journalism, I take no payment. I could see that, to him, the idea of doing any kind of work without payment is a fool's game.

The New York Times points out that Penn seems to have gotten a genuine scoop in El Chapo's happy admission, "I supply more heroin, methamphetamine, cocaine and marijuana than anybody else in the world. I have a fleet of submarines, airplanes, trucks and boats." That's a big change, the Times notes, from Guzmán's insistence in a 1993 interview that he was but a simple farmer who grew corn and beans.

[contextly_sidebar id="PdbQJCiGOG7ypHsUDCxebA1nMGqG07Mo"]Penn says El Chapo is "entirely unapologetic," and that he joked about Donald Trump, whose Twitter rants against El Chapo don't seem to have fazed him. Although Penn reminds us of rumors that Guzmán had placed a million-dollar bounty on Trump's strangely coiffed head, all the drug lord says when Penn mentions him is an irony-laden "Ah! Mi amigo!"

The interview dragged long into the night, and del Castillo eventually went to bed, after which all of the gun-toting bodyguards show up for the rest of the chat, in which Penn gets Guzmán to agree to additional written questions later. But before the meet is over, we're treated to more of Sean Penn's bodily functions in a high-risk situation:

In a narrow, dark passage between ours and an adjacent bungalow, Chapo puts his arm over my shoulder and renews his request that I see him in eight days. "I'll be saying goodbye now," he says. At this moment, I expel a minor traveler's flatulence (sorry), and with it, I experience the same chivalry he'd offered when putting Kate to bed, as he pretends not to notice. We escape its subtle brume, and I join my colleagues inside the bungalow.

There's more, like El Chapo's eventual answer to a question about the damage that drugs do to people. ("Well, it’s a reality that drugs destroy. Unfortunately, as I said, where I grew up there was no other way and there still isn’t a way to survive, no way to work in our economy to be able to make a living.”) Sadly, there are no further digestive details.

Two senior Mexican government sources said they were indeed aware of the October meeting and monitored his movements.

That helped lead them days later to a ranch where Guzmán was staying, one of the sources said. Mexican forces used helicopter gunships to attack Guzmán's ranch during a siege that lasted days.

The kingpin narrowly escaped, with what he told Del Castillo was a minor leg injury, but the raid in the northern state of Durango was a major breakthrough in the manhunt.

The Mexican government, now that it's got Guzmán behind bars again, is reportedly eager to extradite him to the U.S., where putting people in jail forever is one thing we're still really good at. Penn and his journalistic compadres are also of interest to Mexican authorities, according to the New York Times:

In the hours after Mr. Penn’s article was published on Saturday night, a Mexican official said that all actors and producers who had met with Mr. Guzmán, including Mr. Penn and Ms. del Castillo, were under investigation.

But it was not clear if the circumstances of the meeting were under investigation or if the individuals themselves would face scrutiny from the Mexican government.

We'll wait for the movie. To preserve the essential feel of the magazine piece, here's hoping it's made by the Farrelly brothers.