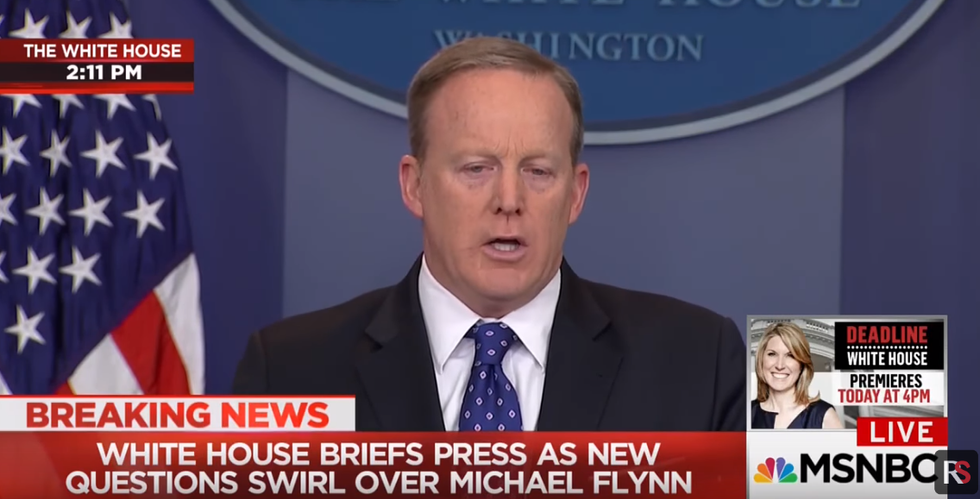 It's so weird, but people just will not get over how Donald Trump hired a literal actual foreign agent to be his national security adviser, and then, once the whole world found out a literal actual foreign agent was the national security adviser, it took Trump about a million years to get around to firing that guy. On Monday, former acting attorney general Sally Yates engaged in the very anti-Trump behavior of testifying before the Senate about how she warned the Trump administration REPEATEDLY that she knew dude was lying about his contacts with the Russians, and the Russians knew he was lying, and therefore he could very possibly be blackmailed by Russia. How is this Making America Great Again? It sure isn't, according to Trump spokes-liar and press secretary Sean Spicer!

During Tuesday's press briefing, Spicer was asked repeatedly about why it took so long for Trump to fire Michael Flynn, and his answers were word salad, word salad, Sally Yates is a Hillary-loving bitch, and also word salad.

FIRST QUESTION: Why did it take Trump 18 WHOLE DAYS to fire Michael Flynn, and would he have been fired at all if the story of Sally Yates warning Team Trump hadn't hit the media?

Well, I think, first of all, let's look at the timeline. Sally Yates came here on the 26th of January. Then she informed the counsel's office that there were materials that were relevant to the situation. It wasn't until about seven days later that they had access to those documents. After that time, they did what you should do, frankly, is an element of due process, of reviewing the situation. They informed the president right away right after they were informed of her giving us a heads up, and ultimately, the president made the right decision. But I guess the question, or the point that I would put back on you is, somebody came over, gave us a heads up on a situation, told us there were materials, we were provided those materials seven days later, we reviewed those materials, underwent a process of reviewing the situation, and ultimately the president made a decision and it was the right one. So, I think that the process worked, frankly, when you think of the time in which we had the information to make the decision that the president made.

WHOA. Sean Spicer literally went through a set of Trump-approved talking points, doubled back, and then went through THE EXACT SAME SET OF TALKING POINTS, as if he had not just said them five seconds ago. Sad!

NEXT: Why, if Trump made "the right decision," can he not seem to keep his mouth off Michael Flynn's dick TO THIS DAY? Spicer said that, even though Flynn was a big liar who supposedly lied to the vice president about his foreign ties (PFFFFFT, Mike Pence knew Flynn was a LITERAL ACTUAL FOREIGN AGENT way back in November, when Rep. Elijah Cummings sent him a letter to that effect), that he served America "honorably" or something, blah blah blah, STFU with your lying fucking face, Sean Spicer.

At that point, Spicer had a "Q.E.D!" moment, explaining that Sally Yates is a Hillary-loving ogress:

One thing that I think is important to note is let's look at, again, how this came down. Someone who is not exactly a supporter of the president's agenda ...

Because she's not a fucking fascist who hates everything America stands for ...

Who, a couple days after this first conversation took place, refused to uphold a lawful order of the president's ...

Because the Muslim Ban was in fact not lawful, as determined by so many judges!

Appointed by the Obama administration and a strong supporter of Clinton!

At that point, Spicer decided Kaitlin Collins had been allowed to ask FAR too many questions, so it was another journalist who later asked, "Hey Spicey you dipshit, can you show us your work if you're going to call Sally Yates a common lover of Hillary?" (That's a slight paraphrase.)

lol, reporter asked Spicer why he claimed Yates was "strong supporter of Hillary Clinton," Spicer OF COURSE says "it was rumored..." pic.twitter.com/UgWmZ1Rol6