Sean Spicer Simply Too Fat To Brief Press These Days 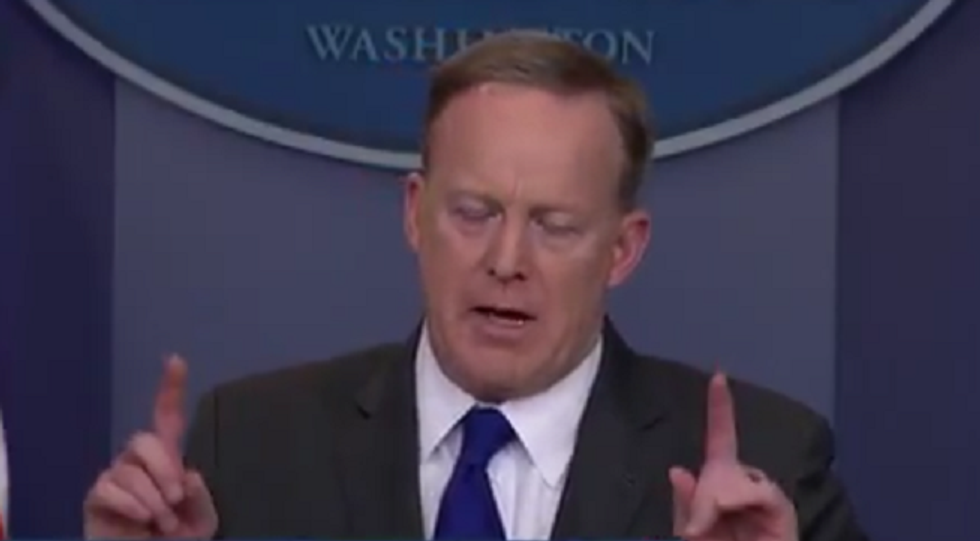 No we don't think that's it.

Have you been missing your daily video love session with White House Press Secretary Sean Spicer? Alternately, have you missed yelling at your TV while Sarah Huckabee Sanders lies her way through the briefing as deputy press secretary, a job she only got because her dad is an "important" person? You are shit out of luck, because the White House has been quietly murdering all the press briefings, because this White House doesn't have any respect for how we do things here in America.

On Monday, CNN reporter Jim Acosta lost his shit when informed that Spicer would be doing a press "gaggle," but that no audio or video was allowed. Acosta tweeted several things that happened during the briefing, like for instance that Trump is STILL being a stupid baby about whether or not he has "tapes" of James Comey, because he's not man enough to admit that his "tapes" tweet was just impotent bluster. He also commented on what's really going on with press access in the White House:

Soon after, Acosta went on CNN and told anchor Brooke Baldwin that this is an embarrassing and fucked up way for the White House to behave, and that moreover it doesn't even feel like he's covering the White House, but rather "with Kellyanne Conway and Omarosa in the briefing room off to the side of Sean, refusing to be on camera, it's like we're just covering bad reality television." In short, Acosta said that if Sean Spicer is unwilling to actually do the work of being the press secretary, then he's simply "useless." Here's more of what Acosta said on CNN, quoted in a piece in The Atlantic with the subtle headline "The White House Press Briefing Is Slowly Dying":

"It just feels like we're slowly but surely being dragged into what is a new normal in this country where the President of the United States is allowed to insulate himself from answering hard questions." ... “I don’t know why we covered that gaggle today ... if they can’t give us the answers to the questions on camera or where we can record the audio. They’re basically pointless at this point.”

So this sounds bad! But do not worry, because The Atlantic reached out to Steve Bannon about WTF IS GOING ON AND WHY ARE YOU ALL HIDING FROM THE TV CAMERAS, and Bannon texted back, "Sean got fatter." And that's all he said. So, do you see? America's institutions aren't in any danger, and they're not trying to hide anything, it's just that Sean Spicer is too much of a beef chunk to appear on camera. What's sad is that this is sort of possible, since Donald Trump is notoriously image conscious and actually might YOU'RE FIRED Spicer for having a big round belly that shakes when he shouts like a bowl full of jelly.

[wonkbar]<a href="http://www.wonkette.com/516692/guest-post-from-a-u-s-marine-about-barack-obamas-shocking-and-disgusting-use-of-an-umbrella"></a>[/wonkbar]There is also the little matter of how Sean Spicer seems to be trying to fire himself. Politico reports that he's leading the search for a new version of himself (hopefully one whose obesity doesn't bother delicious and sexual Steve Bannon!), and that Fox News blowhard dumbass Laura Ingraham and Daily Mail editor David Martosko are in the running, because the Daily Mail is known for being so trustworthy, and David Martosko is known for lying about everything up to and including umbrellas. Sarah Huckabee Sanders apparently isn't interested, because Sarah Huckabee Sanders has two brain cells to rub together. Spicer partly wants the shake-up because he wants a promotion to a role "senior to both the communications director and press secretary," according to Politico. But also everything has been kind of up in the air ever since Donald Trump famously tweeted that it's literally impossible for his press shop to deliver accurate information, because he just moves TOO FAST as president for them to keep up with him. So obviously Trump needs a press secretary whose mind is as ... nimble? Yeah "nimble," let's go with that ... as Trump's. Or maybe Trump should just do the press briefings himself, as he has suggested, except for how he hardly ever speaks to the press.

Jim Acosta reported on Twitter that today, Tuesday, June 20, 2017, Sean Spicer WILL be delivering an on-camera press briefing. Should we liveblog it, just in case it's the last time ever? Or should we skip it entirely because it would just be too traumatic to have to watch Chunky Spice trying to fit in the camera frame, like Steve Bannon suggests? Vote Y/N in the comments, which do not even exist.