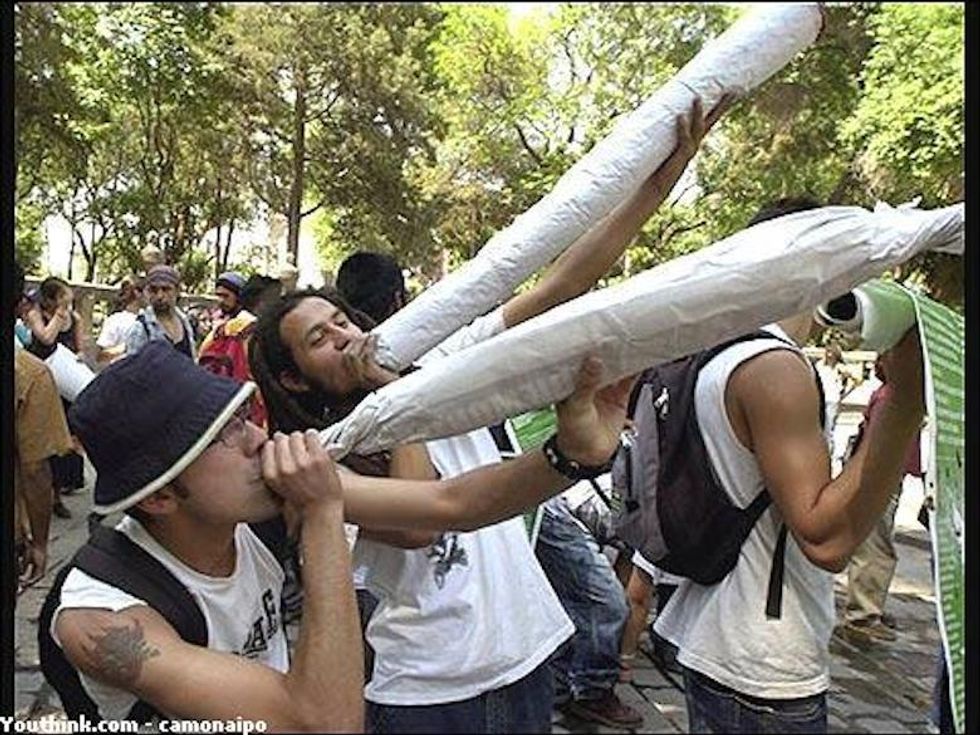 Seattle-based Wonketeers can breathe (and cough, and giggle) a bit more easily now that the police officer responsible for writing 80% of the city's marijuana citations has been reassigned. Seems Officer Randy Jokela fancied himself a bit of a comedian and thought it was a good idea to try out his material on official legal documents! CBS affiliate KIRO-TV and Raw Story will now shotgun the story into your mouth hole.

“In some instances, the officer added notes to the tickets,” [Seattle Police Chief Kathleen] O’Toole said in a statement, adding that some of the notes requested the attention of City Attorney Peter Holmes and were addressed to “Petey Holmes.”

In one case, she said, “the officer indicated he flipped a coin when contemplating which subject to cite.”

In another, O’Toole added, he referred to Washington’s voter-approved changes to marijuana laws as “silly.”

Apparently, even the Pacific Northwest's kindest bud couldn't induce chuckles at Officer Jokela's gut-busting brand of justice. Let's take a closer look at one of Officer Jokela's "jokes" so we can better understand what humorless killjoys Seattle stoners really are. This is a screenshot of one of the funny little notes Officer Jokela added to a criminal citation.

First of all, Officer Jokela, SIR, your penmanship sucks, SIR. So we will transcribe, for moar better readableness.

Glass pipe. D lost the coin flip so he got the ticket while the other person walked. D was allowed to keep his pipe. *ATTN: PETEY HOLMES*

In case you were wondering, "Petey" is Seattle City Attorney Peter Holmes, who supported marijuana legalization and made a campaign promise not to prosecute pot offenders. It's a promise he seems to take seriously, as Holmes sees marijuana legalization as "both a race & social justice and an economic development issue" in addition to being a really great way to get high.

This isn't the first time Seattle cops have seen fit to have a hearty haw-haw at the expense of Holmes while they disproportionately tag black people for pot use. Officers in the city's West Precinct didn't take kindly to Holmes bringing legal weed into his drug-free workplace, so they posted this cartoon of Holmes at the station.

Yes, that's a lava lamp, and yes, at least a few Seattle cops seem to have learned all they need to know about pot from old Cheech & Chong movies. Also, in case you were wondering, yes, Officer Jokela is a public employee, and these hilarious citations are apparently what he thinks professionalism looks like. And he's not alone -- when asked for comment on the cartoon, the department's spokesperson, Sean Whitcomb, said, "We have some very good artists on [sic] this department."