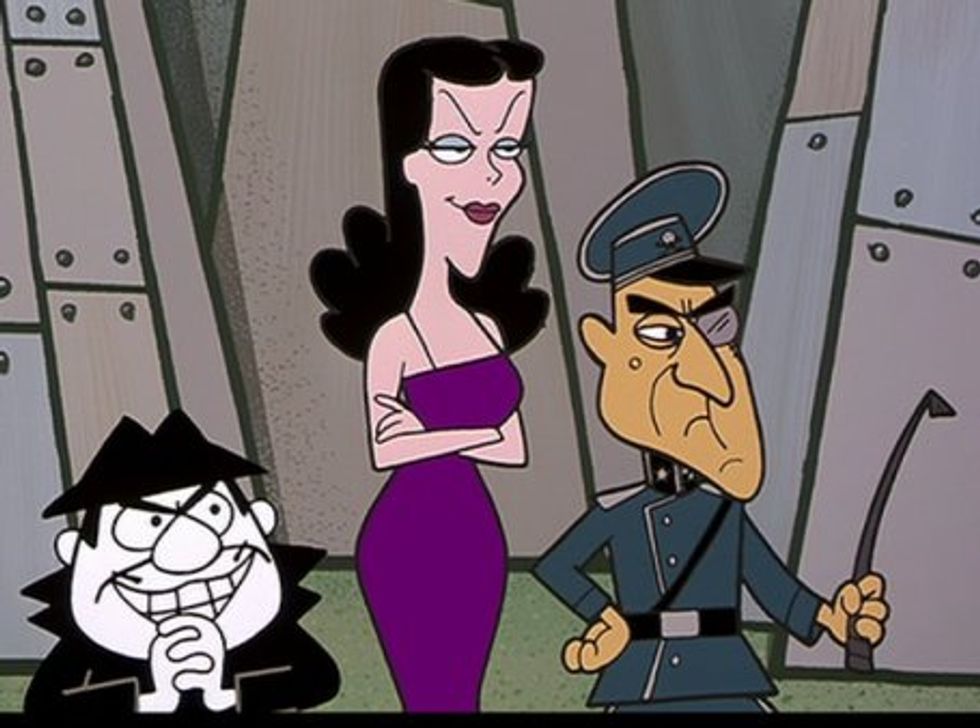 After we hack election, Natasha, we move Taco Tuesday to Fridays!

Some pretty amazing reporting today from Bloomberg Politics reveals that the Russian attempt to hack into states' election systems was much more extensive than we previously knew: The number of states affected appears to be at least 39, which is roughly double the number previously reported. In some states, the hackers even attempted to alter or delete data in state voter databases. There's still no evidence hackers were able to change any votes or even get into systems that directly recorded votes, but the scope of the hacking effort just keeps expanding every time we find out about it.

In addition to the new details about the breadth of the hacking, the story, based on details provided by three anonymous sources "with direct knowledge of the U.S. investigation," also says the Obama administration used -- for the first time -- a computer version of a direct "hotline" to Moscow to complain about the hacking, and to demand Russia back off:

In October, two of the people said, the White House contacted the Kremlin on the back channel to offer detailed documents of what it said was Russia’s role in election meddling and to warn that the attacks risked setting off a broader conflict.

Go read the whole thing: This is one of those investigative pieces that will have you saying "wow" a lot. The big takeaway from this -- along with last week's leak of that NSA document on Russian hacking of state systems -- is that while Russian hackers don't appear to have actually broken anything vital in the 2016 election, the extent of the hacks suggests Russian intelligence agencies have a lot of data to play with in the three years before the 2020 presidential election. One huge concern is that since America's voting systems are a patchwork of different state, county, and municipal systems, there's a hell of a lot of computer infrastructure that needs protecting. (A small upside: there's no single system that can be hacked all at once.)

Or, if you work for Fox News, it means the anti-Trump fake media is getting ever more desperate and making up even more fantastic stories with no evidence, because reality is whatever you feel like it is. Or maybe, Reality will end up the Winner here, if we ever get a public commission and declassification of at least some of the sources. NSA contractor Reality Winner was motivated to leak that classified document after hearing an Intercept podcast claiming there was still no proof of Russian hacking:

Someone was wrong on the internet! And Winner #actuallyed the hell out of them -- to her own detriment.

Bloomberg reporters Michael Riley and Jordan Robertson also offer this somewhat hopeful assessment of one of the mysteries involving the hacks: If the Russians gained access to state computer systems, why didn't they directly muck around with the vote? It's possible the Obama administration's warning to Russia put them on notice that the hacks had been detected, so Russia backed off. But then there's this scarier scenario:

Another former senior U.S. official, who asked for anonymity to discuss the classified U.S. probe into pre-election hacking, said a more likely explanation is that several months of hacking failed to give the attackers the access they needed to master America’s disparate voting systems spread across more than 7,000 local jurisdictions.

Diplomacy, hell. Russian intelligence simply hasn't really given it a good try yet, and 2016 may have been a rehearsal. The article also notes that changing votes might not have even been the objective; instead,

[The] Obama administration believed that the Russians were possibly preparing to delete voter registration information or slow vote tallying in order to undermine confidence in the election.

As for the warning sent through a secure messaging system to Russia, intended to "de-escalate cyber conflict between the two countries," that appears to have had mixed results, at best. When U.S. officials sent Moscow proof that intelligence agencies had detected Russian hacks of election record systems, Russia didn't exactly say "Oops, you caught us, we'll stop, sorry!" Instead,

Russia responded by asking for more information and providing assurances that it would look into the matter even as the hacking continued, according to the two people familiar with the response.

The U.S.'s decentralized voting systems seem to to have helped stymie Russian intruders this time, at least. For instance, in Illinois, which the article calls the "patient zero" of the hacks, a data systems contractor noticed data leaving the state election database without authorization. But the good news is that the state system only collected information from county systems -- it didn't send those voter records back to the counties, so even if the whole state system had been wiped somehow, the counties would have been unaffected. Of course, after a bit of probing, Russian hackers now know to go after counties, which may have less robust security and less funding to beef it up. And the state does process voter registration applications, which it sends to counties for approval, so there's another opportunity to get in and futz around. Fun, huh? We're sure state legislatures are already moving to approve more funding to upgrade security, as long as they can demand five forms of ID from black voters while they're at it.

But it wasn't just probing and stealing voter information -- which included lots of identifying details, like drivers license numbers and partial Social Security numbers. Investigators also determined that hackers who got into the Illinois system

tried but failed to alter or delete some information in the database, an attempt that wasn’t previously reported. That suggested more than a mere spying mission and potentially a test run for a disruptive attack, according to the people familiar with the continuing U.S. counterintelligence inquiry.

That really doesn't sound like the sort of thing a 400-pound guy on a bed in New Jersey would do.

According to one of the sources, the Obama administration was actually far more worried about the attacks on state election systems than the DNC and Clinton campaign attacks, since the intrusions into state records had a greater potential to undermine confidence in the vote. Homeland Security quietly helped states upgrade their security, and Jeh Johnson, then the secretary of DHS, wanted to formally declare election systems "national critical infrastructure," a move Republicans shot down after the earliest briefings on the Russian hacks. As you may recall, when the White House proposed a bipartisan condemnation of the hacks in September, Mitch McConnell

raised doubts about the underlying intelligence and made clear to the administration that he would consider any effort by the White House to challenge the Russians publicly an act of partisan politics.

Thank goodness we've gotten past all that now.

Yr Wonkette is supported by reader donations. Please click the "Donate" clicky below to send us your money. No rubles, please.