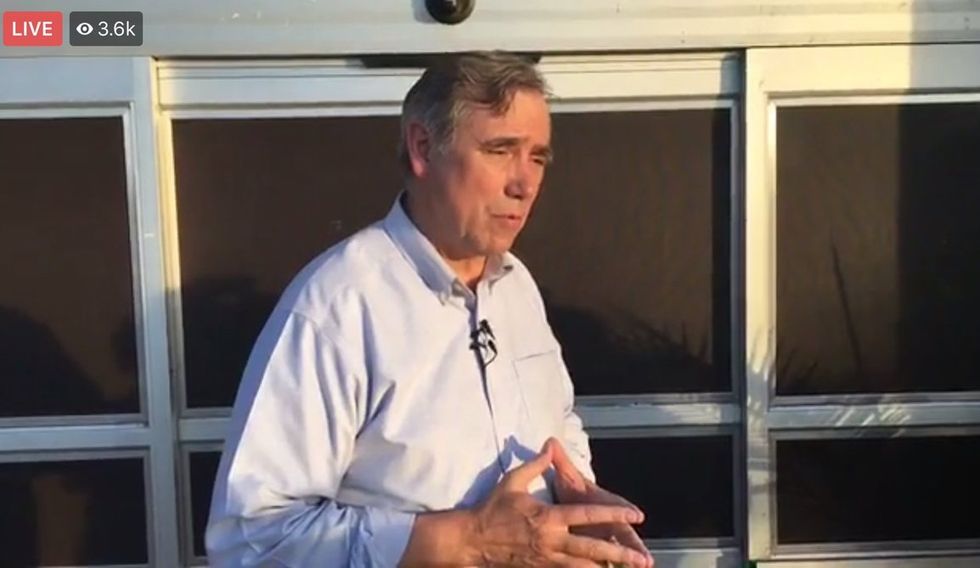 On Sunday, US Senator Jeff Merkley of Oregon tried to speak to officials at a facility in Brownsville, Texas, where migrant children are housed, so of course the facility called the cops. Once the story went viral, the Trump administration went into defensive mode. Monday morning, Donald Trump tweeted out another lie about why children are being taken away from their parents, blaming Democrats for his own policy:

Separating families at the Border is the fault of bad legislation passed by the Democrats. Border Security laws should be changed but the Dems can’t get their act together! Started the Wall.

Did we mention he's lying there? The family separation policy is entirely the Trump administration's policy. Nobody believed Trump, of course, but the pushback against Merkley was far from over. The Department of Health and Human Services, whose Office of Refugee Resettlement (ORR) is responsible for housing unaccompanied migrant children -- and kids who are "unaccompanied" because ICE ripped them out of their parents' arms -- offered this charming statement about why Merkley wasn't able to see the child-warehousing facility in Brownsville:

United States Senator Jeff Merkley (D-OR), along with five other individuals, attempted to enter an unaccompanied alien children’s (UAC) shelter unannounced and broadcast live via social media last night in Texas. Thankfully for the safety, security and dignity of the children being cared for there, they were denied access. The Department of Health and Human Services takes the legal mandate to care for these children seriously. No one who arrives unannounced at one of our shelters demanding access to the children in our care will be permitted, even those claiming to be U.S. Senators.

Yeah, who even knows who that guy was, although as Merkley said several times in his Facebook video, his staff had contacted ORR requesting a site tour and was denied. Maybe he should have just stayed quiet, huh? Instead, he showed up at the building (formerly a Walmart superstore, now with ominous blacked-out windows), and went full Roger and Me to call attention to the problem. Merkley said he'd been told there are as many as a thousand children being housed in the building, and if we recall our visits to Walmart, the retail spaces aren't exactly filled with natural light or fresh air. Maybe they set up an indoor playground of some kind? WHO KNOWS? NOT JEFF MERKLEY!

The HHS statement went on to chide Merkley for not going through Proper Channels:

Senator Merkley should respect the UAC program and engage in the appropriate processes, as many of his colleagues have done before him, to visit ORR facilities. We would welcome him to engage in that process so that he may visit the facility to make headway on this important issue, rather than just headlines.

Shame on him for publicizing this thing the administration would rather not be publicized.

For its part, Southwest Key Programs, the nonprofit that runs the center under contract with ORR, issued a far less blamey statement saying that a site visit would be possible -- again, only after going through proper channels, meaning ORR. The statement also emphasized that all shelters run by the group are "regulated by state childcare licensing authorities as well as local and county authorities," and urged readers to see the FAQ about how its shelters are operated; that page explains that migrant kids receive education, recreation, healthcare, and so on, as required by law. We'll give Southwest Key Programs credit for more effective communication than the government, but that hardly makes the family separation policy any less awful. "Sure, we took kids away, but they're being fed and housed!" Of course, as the ACLU points out in its lawsuit against the government's family separation policy, the psychological trauma to very young children taken from their parents can be permanent. (For an excellent look at how we got to this point, listen to Chris Hayes's podcast interview with Lee Gelernt, the ACLU attorney leading that lawsuit.)

Just to make sure we got our recommended daily allowance of Batshit Insane, the White House itself offered its own statement on Merkley's Texas visit, insisting that if he really cared about the kids, he'd join the administration in spreading panic about all the ANIMALS doing crimes. The statement got rolling by accusing Merkley of "irresponsibly spreading blatant lies about routine immigration enforcement while smearing hard-working, dedicated law enforcement officials at ICE and CBP," and went on to explain the senator was actually aiding and abetting horrific crimes:

He voted against closing the ‘catch-and-release’ loopholes used by child smugglers, and his reckless open borders policies are responsible for the permanent separation of thousands of American families who have been forced to bury their loved ones.

No one is taking a public safety lecture from Sen. Merkley, whose own policies endanger children, empower human smugglers and drug cartels, and allow violent criminal aliens to flood into American communities﻿

Children? What children? Who said anything about children? You wanna talk family separation? How about the families torn apart by every single murderous immigrant? The real question is why Jeff Merkley keeps tongue-kissing MS-13 and getting gang tattoos. The statement also included accusations about Merkley that were supposed to be "on background" -- yes, in an official statement, which is NOT HOW THAT WORKS.

The victims of Sen. Merkley’s reckless open borders policies include his own constituents: a 65 year-old Oregon woman who was sexually assaulted by an illegal alien that had been previously deported 20 times prior, and a young Oregon girl who was allegedly raped several times by a twice-deported illegal alien.

It's even more governing by trolling. Merkley asks why the government is taking children away from their parents, and the government replies, "Why are YOU so in favor of rape? Your own constituents are getting RAPED? Why are you more interested in illegal RAPISTS than American citizens, HUH?" Bunch of fucking bullies. Do we even need to mention Merkley has never advocated "open" borders? Let's add that.

As is their custom, the White House is trying to change the subject by smearing Senator Merkley [...] It’s no surprise because there is no defense for their abhorrent policy of snatching children from their parents.

That's the mandatory pattern now: If you question any part of the New Cruelty, you're just another defender of criminal gangs who want to rape and torture Americans. Jesus H. Christ -- maybe when we take our country back, we could work on recapturing at least a little bit of reality, too.