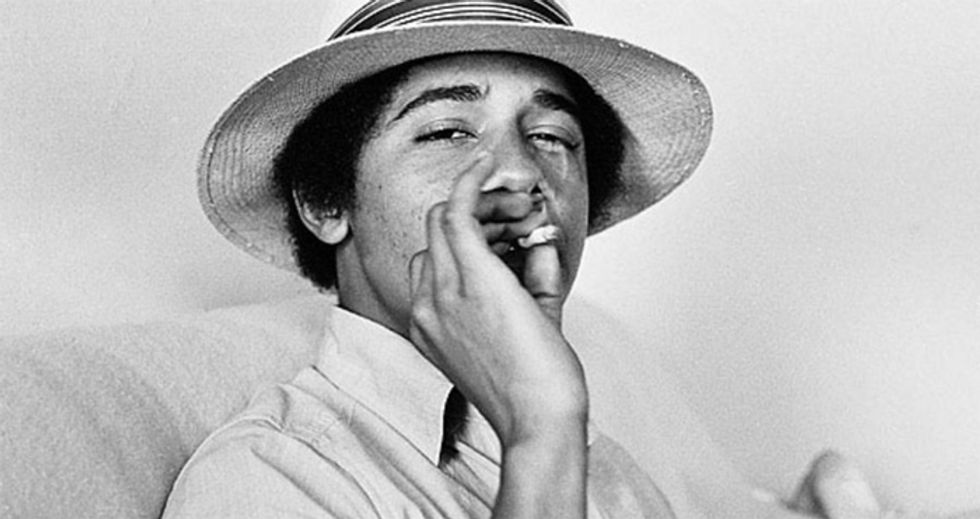 It starts with a single toke. Before you know it, you're unfreezing Iranian assets.

Illinois Sen. Mark Kirk did his best to burnish his image as a really smart person who understands the issues of the day, explaining in a newspaper interview that Barack Obama's decision to release frozen Iranian assets at the same time he negotiated the release of American hostages held by Iran made the president like some kind of drug dealer. You know, like the kind you find in the ghetto. If you know what he means. Drug dealers are very ghetto, you know, what with all their dealings with foreign governments who are holding American hostages. Maybe the Chicago Tribune can translate what Kirk was getting at?

Kirk echoed GOP criticism that the U.S. cash payment of $400 million to Iran was a ransom for the release of American prisoners held by the country.

The money was part of a previously announced settlement in a case stemming from money owed since 1979. The U.S. has had a long-standing policy of not paying ransom for hostages, and the Obama administration described the payment as "leverage" for the release of U.S. prisoners.

"We can't have the president of the United States acting like the drug dealer in chief," Kirk said, "giving clean packs of money to a … state sponsor of terror. Those 500-euro notes will pop up across the Middle East. … We're going to see problems in multiple (countries) because of that money given to them."

As metaphors go, that's not the least bit strained. Unfreezing Iran's assets -- part of the international agreement Obama negotiated to get Iran to dismantle its nuclear weapons program -- is a whole lot like exchanging bundles of cash for drugs. Which would make the four American hostages the drugs? Good god, does this mean America will start shooting up hostages into its eyeballs with a needle? That can't be healthy.

There are two slight problems with Kirk's remarks -- and logic -- which the erudite Wonker will already be pondering: First, are people who venerate Ronald Freaking Reagan actually mad that someone gave money to Iran in return for hostages? (Yes. They are not bright.) And second, can you imagine the hissy fit if Obama were actually so incompetent that he didn't get our hostages back even though we gave Iran back its rather large lump sum? That would not be the best kind of deal! It would not be Trumpy at all!

Will Tammy Duckworth's Robot Feet Kick Mark Kirk Out Of The U.S. Senate?

Sen Kirk is fighting to hold on to his turf in a general election drug war with U.S. Rep. Tammy "The Terminator" Duckworth, who has been beefing with Kirk and attempting to take over his corner. Democrats believe Duckworth is pushing a superior product to the warmed over teabags Sen Kirk has on offer, which seemed highly potent in 2010 but have rapidly lost street cred.

The Tribune notes that Kirk has said a number of stupid wrong things about the Iranian nuclear deal, because he is stupid and wrong:

Shortly after the multination agreement was announced in July of last year, Kirk contended Obama wants "to get nukes to Iran" and called the president "Barack Hussein Obama," using the full name that conservative detractors often use.

Kirk later apologized for those remarks made to a Boston radio station, saying, "Actually (Obama) doesn't want to get nukes." Asked about those comments shortly after he made them, Kirk explained: "That was me being too carried away with, I've been pretty angry about the Iran deal."

Huh. Sounds like the kind of emotionally unstable thing a drug fiend might say. We're only asking.

Immediately after apologizing in that interview last year, however, Kirk offered a far more moderate analogy, suggesting that while the president wasn't trying to set up with Iran the Bomb, he was simply so incompetent they'd end up getting it:

"This is the greatest appeasement since Chamberlain gave Czechoslovakia to Hitler," Kirk said then. Obama "is doing this because of his very poor understanding of history and what happened to Neville Chamberlain." Kirk went on to contend the deal "condemns the next generation to cleaning up a nuclear war in the Persian Gulf."

A spokesman for Duckworth's campaign, Matt McGrath, said Kirk's comments were "disgracefully insulting (to) the president whose Senate seat he now holds."

"It's no surprise Mark Kirk is embracing a conspiracy theory first articulated by Donald Trump — one that has already been debunked by numerous fact checkers," McGrath said.

Completely failing to get into the spirit of things, McGrath utterly missed the opportunity to warn Kirk, "You come at the king, you best not miss."