Sen. Reid Threatens to Drop a Nuke on Congress, Procedural-Style 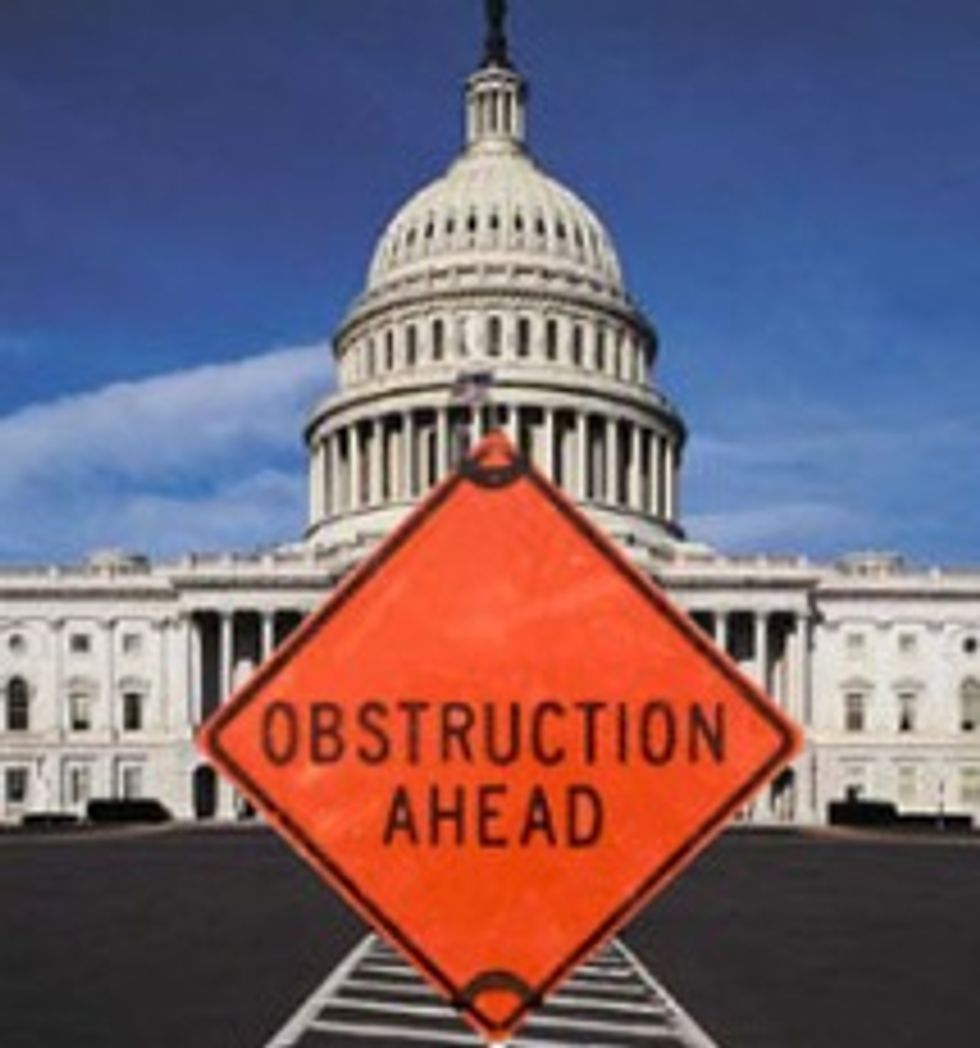 Another day, another article about the dysfunction of Congress. Why oh why can’t Congress get its shit together and do their motherfuckin jobs? What sort of warped suckitude is Congress working up to ruin everyone’s summer, you ask?

It’s the filibuster! Or rather, filibuster reform through the nuclear option of changing the rules to allow a simple majority to move through some (but not all) Senate nominees in order to fill a multitude of judicial and executive vacancies. SO EXCITING! It is, dammit, and we are here to make it more interesting to learn about, so pay attention!

Sen. Reid is threatening to bust out a Congressional nuke in order to virtually ditch the filibuster to more swiftly move the Prezzy’s judicial nominees because he is sick and tired of the GOP mucking things up. How will this happen, you wonder? Buckle your safety belt, we are about to get medieval on this filibuster shit, Wonksplainer style.

In The Beginning, there were a couple hundred nominees. As time moved on, more and more were added. President Kennedy had 850 Senate-confirmed positions in his administration, and now President Obama has 1,215 to fill. And that’s not counting various judges that need to be confirmed by the Senate. Many positions sail through the Senate via a process known as unanimous consent. This is basically a process where no Senator objects to a nominee (or even a piece of legislation) and it passes the Senate because no one cares enough to say no. This is how most stuff passes the Senate, no lie. Yay Democracy!

However, the Senate L.O.V.E.S to make more and more positions Senate-confirmable. This way, they have more power to completely dick around with the President and hold up his nominees for completely arbitrary reasons like whiny little babies who demand that they get their way or they will whine and cry and hold up your nominee even if they poop their pants. Srsly, many Senators will hold up minor nominees for months for completely unrelated issues, or in order to add an amendment to a completely unrelated bill, because they have the power to do that, and are just dickish enough to do it.

So where are we going with this? Ah yes, the filibuster reform.

To hold up nominees, Senators threaten to filibuster them. This is not the romantic notion of the filibuster, a la Mr. Smith Goes to Washington. No talking is actually necessarily. Basically, just the threat is enough to keep the process from moving forward because like the rest of America, the Senate is just pretty damn lazy, or something. It's complicated and not exactly relevant for this post. Anyway, Senators threaten to filibuster and the only way to move forward is through invoking cloture.

Cloture is pretty much a made-up Senate word that means to put a time limit on debate. This way, Sen. Asshat McClownfart (R-Flyover) can’t yap his pissflaps forever and keep something (like a judicial nominee or health care for poor people) from moving forward. But it takes 60 votes to invoke cloture, which ain’t that easy to do because all the Republicans in the Senate suck at the teat of Tea Party monies, and the Tea Party hates to see any laws pass because liberty.

Even if cloture is invoked, debate is limited to 30 hours, so nothing can pass for like 2 days even after they get cloture.  And if the GOP really wants to throw a wrench in something, they can try to filibuster a bill twice, meaning it takes 60 hours (one can filibuster both the motion to proceed, and then the final passage of a bill. Congress is complicated and ridiculous).

The GOP in the Senate has decided that the only liberal position it will take is the liberal use of the filibuster. They filibuster EVERY GODDAM THING all the time, which is why nothing can ever get done without 60 votes and an assload of floor time. When Dems were in the minority in the mid-2000s, the Senate filed for cloture between 60-80 times per two-year session.  Once the GOP became the minority, those numbers skyrocketed to almost 140 times, per data from the Washington Post.

Sen. Reid (D-ScrappyDoo) is finally mad as hell and not gonna to take it anymore. He is threatening to go nuclear, which is basically to use a little-known Senate procedure to change the process on some nominees so that a simple 51-vote majority is enough to get folks confirmed. He has changed the rules once before back in 2011 after the Senate had moved on to final passage of a bill, and it caused Sen. McConnell to basically flip his shit.

At the beginning of this Congressional session, Sen. Reid had the opportunity to support Jeff Merkley (D-OR) and Tom Udall (D-NM) and other liberals in a comprehensive filibuster reform effort. He wussed out, and ended up working with Sen. McConnell on a watered-down agreement that basically sucks. They agreed that the GOP would rein in filibustering qualified nominees and limit cloture to less time if it passed if Sen. Reid would allow a more open process to add amendments to bills.

Now, however, there are three vacancies on the D.C. Court of Appeals, commonly considered the second-most powerful court in the land. President Obama is set to announce folks to fill those positions. Take it away, Mother Jones:

The strategy appears to be simple: nominate three judges who are left-of-center but basically uncontroversial, giving Republicans no legitimate hook for opposition. If they filibuster anyway, implicitly breaking their promise earlier this year to rein in their obstructionism, maybe centrist Democrats can finally be persuaded to support serious filibuster reform.

The Dems are also angry about GOP stall tactics with other nominees, such as Secretary of Labor nominee Thomas Perez, EPA nominee Gina McCarthy, and Consumer Financial Protection Bureau Richard Cordray, among about a zillion others.

In a nutshell, the GOP does everything in its power to ensure that Congress doesn’t get anything done, and President Obama can’t make many of his Constitutionally-mandated appointments. This is the obstruction that is commonly blathered about in the media, but no one takes the time to explain, so then people blame all of Congress, rather than the FUCKING GOP ASSHOLES who are actually the ones mucking up the system and wasting time because they are sore loser crybabies who hate Our Glorified Leader, His Excellency Barack Obama, Esq.

However, Sen. Reid has said that he won’t begin any nuke-dropping until after the immigration bill moves, so it could be July before we see these fireworks (get it – July… fireworks? Whatever, you people only appreciate peener jokes. Fine, we'll finish with one).

Let’s hope Sen. Reid can swing his turgid penis in the face of opposition, and spray the entire Senate with the sweet release of filibuster reform!