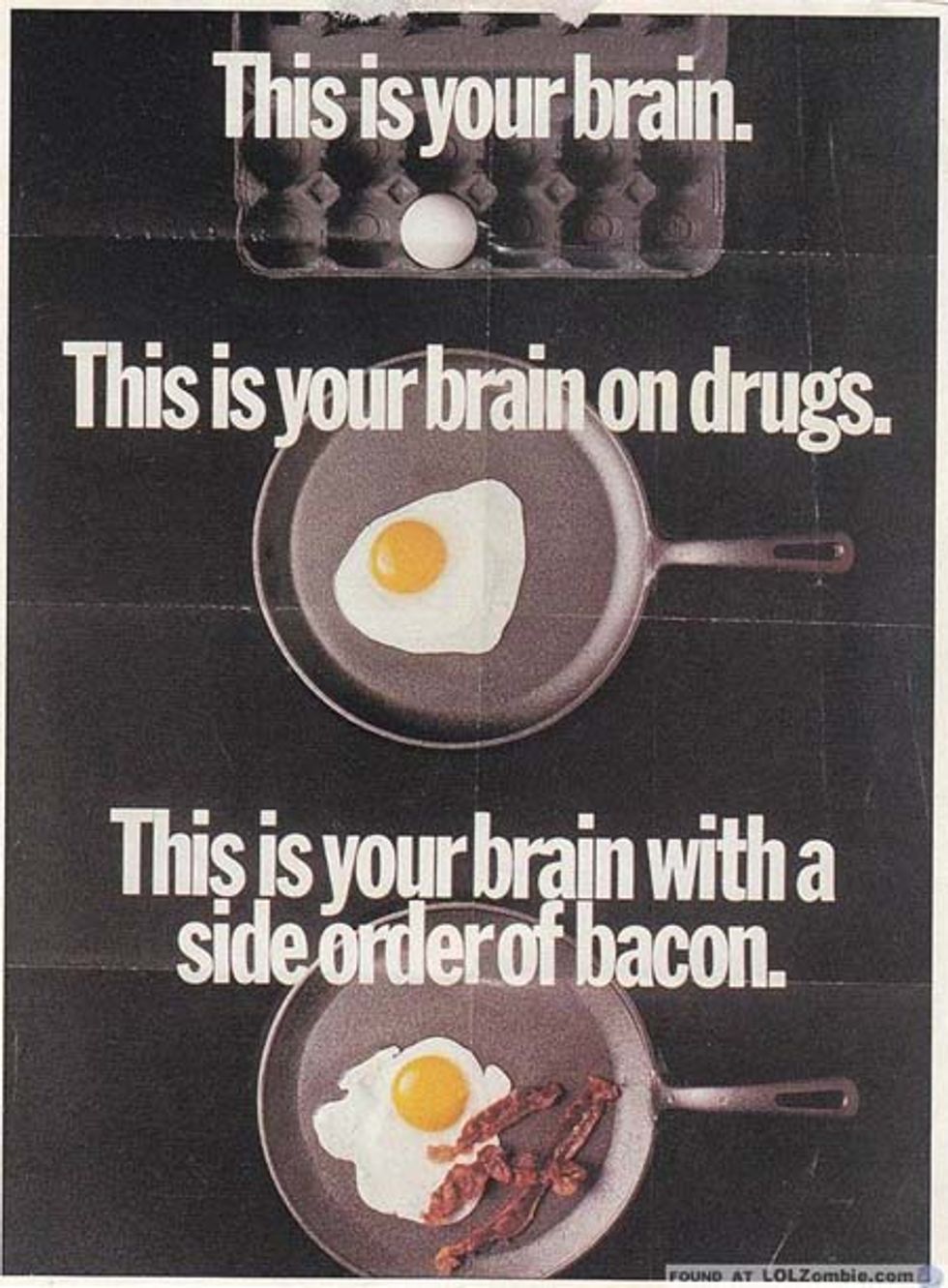 You want hash brownies with that?

Wisconsin Sen. Ron Johnson may have voted against funding to fight the opioid epidemic with treatment, but that doesn't mean he doesn't have ideas on the topic. For one thing, he says, maybe we could bring back those "this is your brain on drugs" ads that amused lots of people but didn't have much effect on drug use. Johnson made the suggestion in a radio interview back in December that was recently dug up by the Huffington Post.

The host noted that after years and "billions, maybe trillions" of dollars spent in the war on drugs, there's still lots of drugs. So what could we do that might work? Johnson said maybe we oughta get those eggs frying again:

“You know, when I was down there Gen. Kelly posed the question to me, ‘You know, senator, when’s the last time we’ve had a concerted national public relations education campaign to try and dissuade Americans, particularly young people, from taking drugs?’”

“And I thought back to Nancy Reagan, ‘Just Say No,’” he continued, “and then a few years later they had that famous commercial with, you know, a pan with a couple eggs and there’s your brain and scramble them up and there’s your brain on drugs. Well, why don’t we first do something like that? Let’s try to dissuade our young people.”

Genius! Remember how those ads kept everybody off drugs in the first place, and then there were no more drug addicts?

Oh, except for how none of that happened, but everybody felt really good that we were sending an important message? Yr Dok Zoom's favorite example was at an air show he went to in the late '80s: there was a fairly impressive display of stunt flying in a small helicopter, and then the show ended with the plucky helicopter rounding up some "drug smugglers" and doing a fly-by with a banner reading "SAY NO TO DRUGS." I immediately decided to kick my heroin habit.

If you want to go with boring old science stuff, some research indicates that anti-drug propaganda may do more harm than good, which is why Reefer Madness plays so well as comedy, but not so well as an anti-drug message.

In a 2008 study, participants who were primed with anti-drug PSAs were more curious about using drugs than those that hadn't seen the PSAs. [Journalism professor Carson] Wagner and his co-author, S. Shyam Sundar, found that because anti-drug ads made the viewer think more about drugs, it could also lead them to believe drug use is more prevalent than it really is. "These results should be seriously considered, as it has been consistently recognized in psychological research that curiosity is one of the most potent motivational forces for human behavior," the paper warned.

Sen. Johnson also seems to be under the impression that anti-drug PSAs went away altogether; rather, the methods have shifted to messages that are less obviously ridiculous. The relatively recent "Above the Influence" campaign has tried to "find out what kids who don't use drugs do, and advertise those activities":

Michael Slater, the study's principle investigator and a professor of social and behavioral sciences at The Ohio State University, says initial anti-drug ads didn't take into account the nature of being a teenager.

"Research shows that at least half of teens are sensation-seeking. Taking chances is exciting," he explains. "It's developmentally part of being a teenager to buck adult rules and take moderate risks."

Maybe drug abuse is a complex problem that needs to be addressed through treatment, reconsideration of how doctors prescribe opioids, and more treatment?

Or we could just scare kids. GRRR! That works! Here's hoping Ron Johnson hurries up and loses to Russ Feingold in November, before somebody reminds Johnson of this nightmare-fuel ad that literally left Yr Doktor Zoom too terrified to watch TV alone for several months as a kid (seriously, don't watch this with a kid in the room):