Senate Dems R On Ur Capitol Steps, Restoring Ur Faith In Democracy 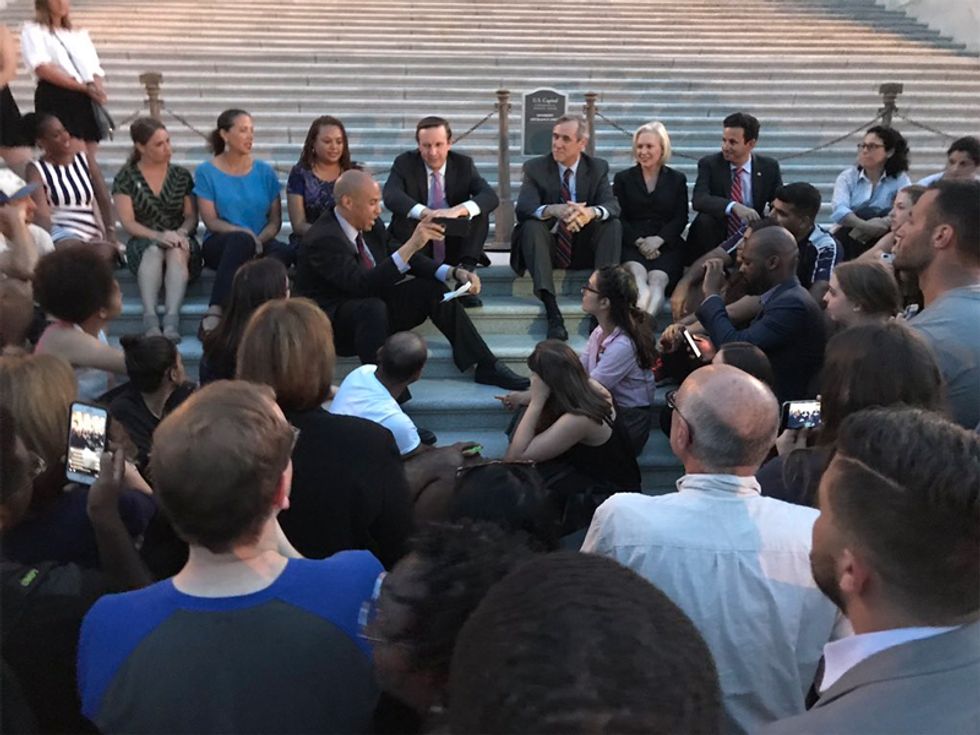 Kids, if you want to counteract that suspicion that the USA has become a hopeless Crapsack Dystopia, go read this nifty Twitter thread by Ben Wikler, the Washington director for MoveOn. It's about a Cool Thing That Happened on the steps of the U.S. Capitol Monday night after New Jersey Senator Cory Booker and actual national treasure Rep. John Lewis sat down to do a Facebook Live stream about Democratic opposition to the Republicans' plan to kill Obamacare. It started off pretty small, just the two of them talking policy like a couple of policy nerds while inside the Senate, Dems held the floor in another talkathon against the Better Not Expect Republicans To Care plan:

Wikler was actually on Capitol Hill for other business when he got a text telling him to go check out what was happening on the steps of the Senate: a good old-fashioned hippie teach-in by a bunch of liberal senators, who came out to join Booker and Lewis after their turns on the floor:

Maybe 20 people were sitting around them. They were telling stories about health care, laughing, answering questions. Felt like a picnic.

I sat down. Realized I was sitting on the jacket of @SenBobCasey, who I realized was sitting next to me. Oops! Hi! Wow! Is this real?

Totally real. Organic, spontaneous. Senators kept drifting out. Passers-by kept wandering over and sitting down. This, I thought, must be what democracy is like in very tiny countries, or Ancient Greece. Senators & citizens kibbitzing about issues.

More and more people kept showing up -- thanks, social media! -- and before long, there were hundreds of people, a semi-spontaneous rally for health care on a nice June evening. We liked knowing that Wikler, who's no stranger to Washington, was nonetheless a little star-struck at seeing all these "people you normally see on TV" passing a phone around to make a video on the Facebooks.

Wikler was also proud to have the privilege of not only speaking to the crowd himself, but of providing a spare battery pack to power Booker's iPhone when it ran low. Nerds!

But it wasn't only a nice time, as Wikler goes on to explain; the encouraging thing is that people were showing up, engaged and ready to fight to protect the ACA. The smart money is on the bastards with the money, but if enough people make enough of a ruckus, the good guys just might win, and tens of millions of people will keep their healthcare, which, as a wise man once said, is a big fucking deal.

When the vote on the Senate murder of Obamacare was expected this week -- without any hearings -- several groups, including MoveOn, planned a "People's Filibuster" Tuesday through Thursday outside the Capitol. That's going on right now, even though Mitch McConnell realized Tuesday he hadn't yet pleased both Rand Paul and Susan Collins, and temporarily pulled it to make it more evil.

Look who showed up at the protest today: Michael Phillips, the guy who made Ari Melber cry on MSNBC last weekend. He and his family came up from their home in Florida to talk to the People's Filibuster:

The People's Filibuster will continue today and tomorrow; if you're in DC, go on down to the Capitol and make some noise. If you're not, look for local events, especially during the 4th of July break when many senators will be back in their home states, even if they're hiding out from the public. They need to hear from you, and we need to shut this abomination down. As President Barry said, don't just boo -- organize.

Also, when Monday's impromptu rally ended, Wikler got his iPhone battery back from Cory Booker. And took a selfie, of course:

What a nerd. Wikler, too.

Yr Wonkette relies on your generous donations to keep us in coffee and snark. Please click the "Donate" linky, will ya?