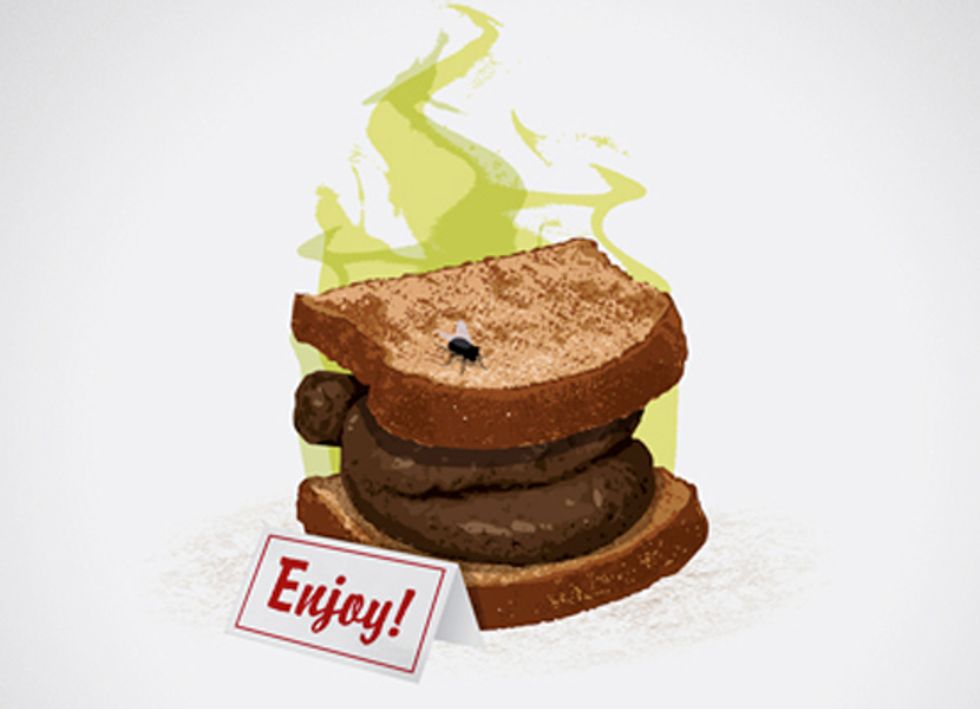 Unlike some shit sandwiches, if you have enough bread, others will eat shit for YOU.

Defying the conventional wisdom that it would be stupid to add more complications to an already contentious bill, Senate Republican couldn't resist adding a repeal of the Affordable Care Act's individual mandate into the tax cuts for the super rich bill. The idea was so toxic that the House left Obamacare repeal out of its version of the tax bill, but Senate Rs just couldn't help themselves, so they popped a couple Tic Tacs and gave a big wet kiss to Donald Trump and the far right. The result, if it passes, would be millions more people uninsured, and much higher premiums for plans in the ACA individual markets.

In addition to killing off the individual mandate, Republicans also made their plan's tax cuts for individuals temporary -- the lower tax rates for wages would expire after 10 years, while corporate tax cuts would be permanent. That bit of budgetary sleight of hand is aimed at reducing -- on paper at least -- the long-term impact of huge tax cuts on the deficit. The decimation of the ACA is also intended to save money, since with millions not getting insurance, the government wouldn't have to pay subsidies to help them. But it's also a nice way to screw the poor and trash Barack Obama's legacy, so that one's kind of a twofer.

The Congressional Budget Office estimates that eliminating the ACA's individual mandate, which requires most Americans to have health insurance or pay a tax penalty, would cause 13 million more Americans to be uninsured, most because younger, healthier people would say "whoopee! I don't have to be ready for a health emergency!" and drop their coverage, but also because many people would be priced out of the market. With the young healthies out of the insurance risk pool, those still buying health insurance would be older and sicker, and insurance companies would start jacking up their rates to compensate, with premiums for individual plans increasing at least 10 percent annually.

He really should just shut up and look pretty.

The whole reason for the individual mandate -- which conservatives hate -- was to balance out the part of the ACA that almost everyone likes: the elimination of higher costs or denials of coverage for preexisting conditions. Getting young healthies, who use fewer services, into the risk pool makes it possible for insurers to provide affordable coverage to everyone. That is not socialism, that is just how insurance works. Eliminating the individual mandate would be like having a system where car insurance is only bought by bad drivers -- costs would go through the roof.

Oh, but there's also an upside to blowing up the health insurance market: The CBO projects that, over 10 years, the resulting savings to the budget would come to over $300 billion, which would help offset the $1 trillion in revenue lost from cutting taxes on the wealthy and on corporations. So if you can't afford healthcare anymore, you can at least smile and know you're doing your part to help one percenters plow more money into their investment portfolios. And no, tax cuts won't create significant job growth, so don't believe any GOP hucksters saying the folks losing insurance will be fine since they'll soon get a great job. Not that we think any Wonkette readers would be dumb enough to believe that anyway.

Oh, and while we're talking about the effects of the tax cut bill on healthcare, the CBO estimated Tuesday that the tax cut proposal would also cut Medicare funding by $25 billion a year. Yes, those are immediate cuts, and completely separate from the effects of eliminating the ACA's individual mandate.

What's not clear yet is whether sneaking in these measures to shaft people who need healthcare will help or hurt the tax bill's chances. The Rs can only lose two votes on this thing, and Alaska's Lisa Murkowski and Maine's Susan Collins opposed the earlier Senate attempts to repeal the ACA because it would leave too many people without coverage, so they may oppose this abomination as well. Or maybe they'll support it, since most of those losing coverage would "choose" not to be covered, ans fuck anyone whose premiums go up. (And no, we're not including John McCain, who voted against the "skinny repeal" because it didn't go through "regular order." Neither has this tax bill, really, but it's had at least a couple committee hearings, so McCain may well smile and vote for it.)

What IS clear is that we need to make noise to our senators, yes, again, damn it. Listen to Al Franken, get on the phone, show up at senators' local offices, and get into the streets. Yes, we know you have holiday cooking to do. This is more important.

Yr Wonkette is supported by reader donations. Please click here to send us some moneys!