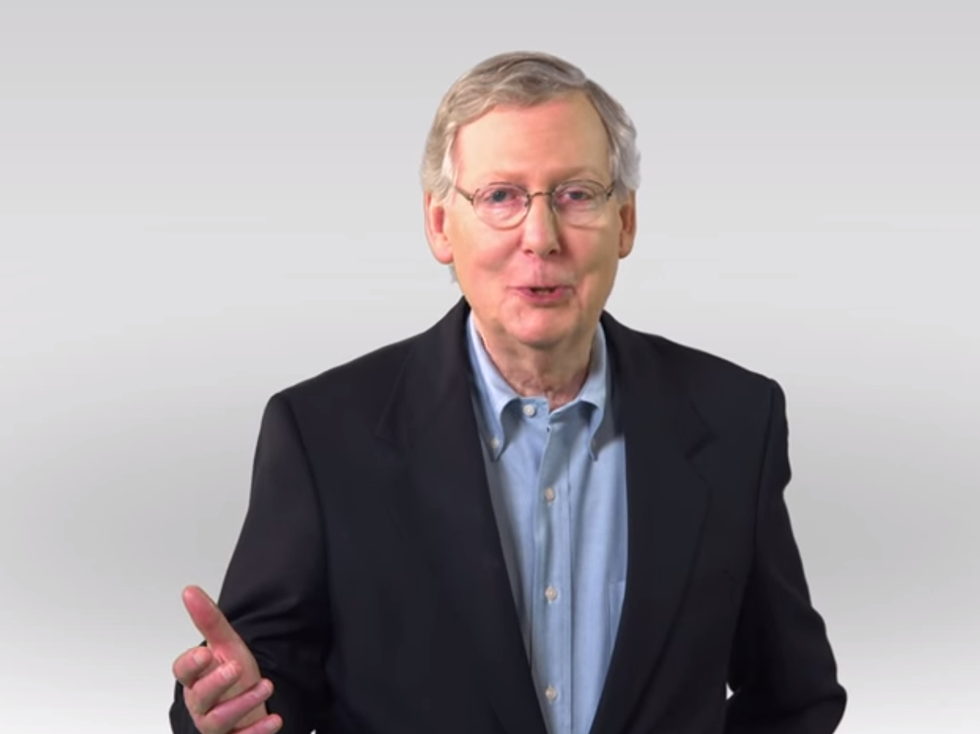 In another display of bold, big boy leadership, Senate Republicans just barely passed a budget resolution on Tuesday, which serves no purpose whatsoever other than putting on the record, again, that they are the party of terrible people who want to do terrible things to America. As if we didn't already know.

The non-binding resolution does not go to Obama's desk to be signed into law. Instead, it helps guide Congress' consideration of government agency spending bills and serves as a Republican fiscal policy manifesto that will influence 2016 election campaigns.

The resolution did not garner a single Democratic vote, and President Obama would of course veto it -- it includes a provision to repeal Obamacare, for one thing, which he has said for years now he is not going to do, because he's stubborn like that. So it's merely a statement of Senate Republicans agreeing with their friends in the House that it sure would be neat if they were in charge of the whole government, so they could kill all the best parts of it and reallocate all our tax dollars to dropping bombs on, like, whoever.

You may recall us pounding our fists into our own faces when House Republicans first unveiled their Balanced Budget Bill in March, and again, even harder, when the House passed the bill, despite Democrats saying, "Yeah, that is NEVER gonna happen." Here's a refresher:

It would not actually balance the budget (unless you do some fancy magic “math” to it, which does not work in the real world, sorry) nor does it make America stronger, but come ON, it’s got a nice-sounding name, isn’t that enough?

It would privatize Medicare, repeal the Affordable Care Act, slash funding for food stamps and financial aid for college students, deregulate Wall Street, and tell the CIA and the Department of Defense not to bother with “climate change” research because that’s a waste of money that could be better spent on MORE WAR.

The only Republican senators who voted against the budget "plan" were Ted Cruz and Rand Paul, maybe because they know that telling voters, even GOP primary voters, they're super into this "Grab your ankles, America!" budget is not a winning argument. (Apparently, Marco Rubio is not that smart. Yes, we know you're shocked.) Sen. David Vitter didn't bother voting because he's busy "running for governor" in Louisiana, which we assume is his new preferred euphemism for banging prostitutes while his wife isn't watching.

Senate Budget Committee Chairman Mike Enzi made some fart sounds with his face to explain this idiotic non-binding budget.

"American families know they can’t live on borrowed money," he said, "and neither can the federal government. This balanced budget shows these families that if they can do it, so can we."

Hate to argue with you there, Senator, but have you ever looked into the enormous consumer lending problems in this country? Those aren't American families balancing their budgets, buddy. It's just not the American way. You should go ask your Democratic colleague Elizabeth Warren about that; she'll explain it to you, and she'll even use little words so you might understand.

Besides, if we shouldn't be spending money we don't have, why are Republicans trying to force more billions of dollars to fight the War on Terra than the president has even asked for? Oh because that's different, and when it comes to killing them over there so we don't have to let them steal our freedoms over here, some things are more important than balanced budgets. Like bombs and guns and big jets and stuff. Not healthcare to keep people from dying, of course. Gotta tighten the belt somewhere.