Senate Sunday: In Florida, It's Bill Nelson Versus Voldemort 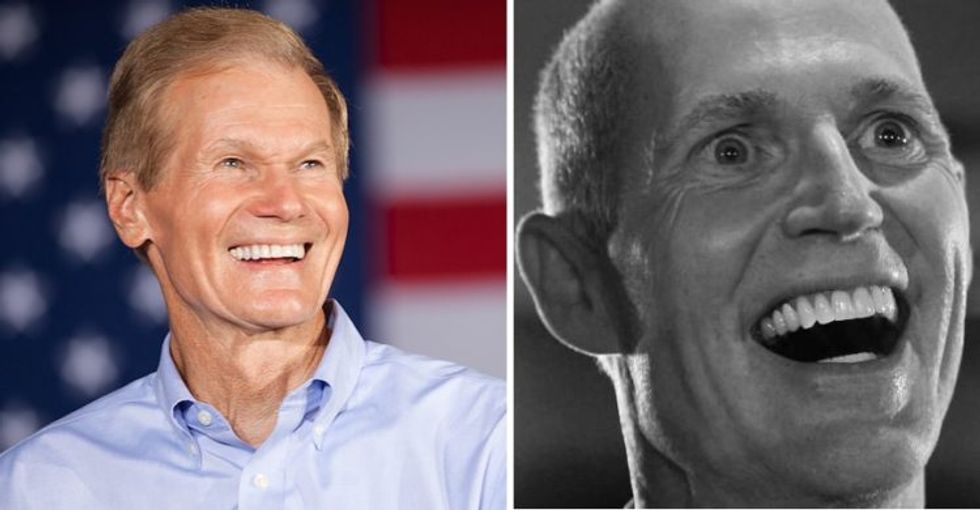 'Not a Death-Eater' may not be the best campaign slogan, but it's a start

Florida Gov. Rick Scott (R-Mount Doom) is gearing up to run for the US Senate this fall. He hasn't declared yet, in part because he said he wanted to wait for the end of the current Florida legislative session (it should have ended Friday, but budget stuff is pushing it into next week at least) and in part because the fundraising and spending limits for the Florida governor are unlimited, but once he declares for Senate, federal limits would apply. Ain't campaign money beautiful? Also, there's the possibility Scott may decide not to run at all, which seems just the tiniest bit unlikely for a power-mad comic book villain who's also term-limited in his current job. We'll know in a week or two whether he has a secret submarine base under an extinct volcano to retire to.

Scott would be going up against three-term incumbent Democrat Bill Nelson, whose greatest liability so far is that lots of people have trouble remembering Florida has a US Senator who's actually senior to Marco Rubio. Bill Nelson is a perfectly cromulent fellow who does good work for his constituents, although as a politician, he's sometimes about as exciting as the name "Bill Nelson." (Sadly, in campaign season, voters may forget that "competent, reliable, and not flashy" are actually good things in a legislator.) Nelson's is one of the names that tends to come up in lists of vulnerable Democratic incumbents for 2018 -- not because he's done anything wrong in his Senate career, but because he's a Democrat in a state Donald Trump won, and where Donald Trump can still draw big crowds.

Not to put any pressure on Nelson, but if Democrats hope to take the Senate back, they absolutely have to hold on to seats like his. Bill Nelson does at least have the advantages of being well-liked by his constituents and of not being Rick Fucking Scott, which is definitely going to be a problem for the guy who is.

Before the campaign has gotten into full swing, Nelson has a slim polling advantage: a Quinnipiac University poll at the end of February, Nelson was slightly ahead of Scott, with 46 percent of Floridians saying they preferred Nelson and 42 percent going for Scott, with some possibly mistaking him for the lovable Bat Boy character from the old Weekly World News. In what's likely to be good news for Nelson, his lead among independent voters was 44-33 percent. Scott has also suffered in the past from low approval ratings, but his recent tough-ish talk on guns may have helped some after the Parkland shooting; his favorable rating in the most recent poll was 49-40 percent, the highest he's gotten.

The main thing to remember about Rick Scott, especially as he tries to make an election-year pivot toward something like the center-right, is that he has always been more than just a little bit slimy. This is the man who, before entering politics, ran Columbia/HCA, a hospital chain that was responsible for the biggest Medicare fraud case in history. He was forced out as CEO in 1997; Scott always claimed he had no knowledge of the frauding and that the bad actors were all lower-level executives. Florida voters decided that was good enough for them, because Florida, and with Scott spending $75 million of his own money in the campaign, elected him governor in the Tea Party wave of 2010.

Scott has continued that record of awfulness through two terms; by 2011, he'd distinguished himself in polling as America's most-disliked governor and was already racking up accusations of iffy ethics. He's constantly fought against the expansion of Medicaid in Florida, and that has actually killed people. He signed a bill defunding Planned Parenthood, whose supporters suggested that instead, women could get ladyparts checkups at the dentist. We really wish we were making that up. When a Lake Worth city commissioner yelled at him in a Starbucks about his terrible policies and the video went viral, Scott ran an ad to attack the woman as an anarchist. Nice guy!

Like the rest of the Florida GOP, Rick Scott has for eight years been a wholly-owned subsidiary of the National Rifle Association. If you haven't read the terrific New Yorker profile of Marion Hammer, the former NRA president who, as the group's top lobbyist in Florida, has turned the state into a labratory for loose gun laws, then for Crom's sake take the time to read it (it even has an embedded audio version if you'd rather listen to it while doing dishes. Be careful with the knives; it may make you stabby).

Florida 'Stand Your Ground' Law Might Get Even More Murder-licious!

At the direction of Ms. Hammer, Scott, signed on to the nation's most infamous "stand your ground" law, as well as a 2011 law prohibiting physicians from asking patients whether they had guns in the home (pediatricians have this silly idea parents should be reminded to keep their guns locked up, the commies). Dubbed "Docs vs. Glocks," that one was found unconstitutional last year -- after Florida spent $1.1 million defending it. To balance things out, even though "stand your ground" has been shown to increase homicides, last year, Scott signed into law an insane enhancement of the existing law: Now, if a Florida dipshit shoots someone and claims they were standing their ground, prosecutors will have to prove -- before filing charges! -- that the shooter wasn't justified in using deadly force. Yay! Legal homicide! And of course, following the Pulse nightclub massacre, Scott said it wouldn't be appropriate to do anything about guns.

With all that in mind, Scott's "defiance" of the NRA this week, by signing a law raising the age for purchasing long guns to 21, is pretty far from a major pivot. The NRA is suing over the new law, and it's remotely possible signing the bill could affect Scott's A-Triple-Plusgood NRA rating -- he might not even win this year's Golden Sucking Chest Wound award.

Scott will also no doubt try to present himself as a champion of the environment since he got Ryan Zinke to say he'd exempted Florida from offshore drilling. All you have to do is overlook his friendliness to Big Oil and agribusiness interests, not to mention his notorious 2015 attempt to simply ban state employees from using the words "climate change," which are of the Devil.

What we are saying here is that Rick Scott is an asshole who should never get the chance to do damage at a national level.

Now, Bill Nelson has some chops that may play well this fall against Scott. For one thing, in a state where the students of Marjory Stoneman Douglas High School (and those they've inspired) are leading the discourse on guns, Scott's small improvement was far from the assault weapons bans the kids have been calling for. Bill Nelson made a point of saying at that CNN town hall on guns that he's actually co-sponsored a measure in the US Senate to take 200 models of assault-style semiautomatic rifles off the market (Deleted Commenters, please stuff your nitpicks about a 3-position selector switch, mmkay?). Nelson also pointed out -- without naming any Florida governors in particular -- that the damn things are now being built in Florida:

When a kid in the onstage group asked Marco Rubio why Congress has done nothing about guns after other school shootings, Nelson was quick to jump in and remind them of inaction in the Florida statehouse and governor's office:

“You could ask the same question," Nelson said, “why two years ago when 49 lives were taken in the Pulse nightclub, and nothing was done; not in Washington, not in Tallahassee, not one thing offered by the administration in Tallahassee."

Of the incremental change Scott signed into law, Nelson said, in a statement,

Students, parents and teachers across our state are demanding action—but instead of listening to them, it's clear the governor is once again choosing to listen only to the NRA [...] The governor's plan doesn't do one thing to ensure comprehensive criminal background checks or ban assault rifles, like the AR-15. His leadership is weak and by recommending raising the age to 21 he is doing the bare minimum.

If the kids continue the pressure and make guns a critical issue this fall, Bill Nelson began making the case -- immediately after Parkland -- that enough is enough, and politicians benefiting from the NRA's help are not the ones who'll be making anything better:

Nelson is also strong on other Democratic issues: on the environment and energy, he's no friend of big oil, and, not surprisingly, thinks science is real. Wouldn't it be nice if that became a trend? He has 100 percent ratings from Planned Parenthood and NARAL, and perfectly terrible ratings from all the usual conservative organizations -- the late Phyllis Schlafly's Eagle Forum gives him a solid zero, for instance. On immigration, Nelson was among the bipartisan group of senators who wanted a straight vote to protect Dreamers from deportation, with some border security money thrown in.

And Nelson may have a truly powerful voting bloc, if Democrats can manage to win the registration and turnout effort: Since Hurricane Maria, as many as 200,000 Puerto Ricans have left the island, and the majority have settled, for now at least, in Florida. The exact number is hard to pin down, but it's entirely possible that a lot of American citizens, ticked off by federal neglect of Puerto Rico, could help give Bill Nelson a boost this fall. Turnout is going to be everything in this race.

So hey, how about you send Bill Nelson a few bucks? He's up against a master of the Dark Arts, and he's got a hell of a fight on his hands.

Yr Wonkette is supported by reader donations. Please click here to send us money! And remember to help out Bill Nelson, too!

Important Programming Note: Dear Shitferbrains will be back next week; since writing 7 days a week is not a thing I'ma do, Shitferbrains may shift to every other Sunday while we're profiling Senate races. Don't worry, the deleted comments will surely remain terrible.