Senate Sunday: North Carolina Might Turn Blue, Without Even Holding Its Breath 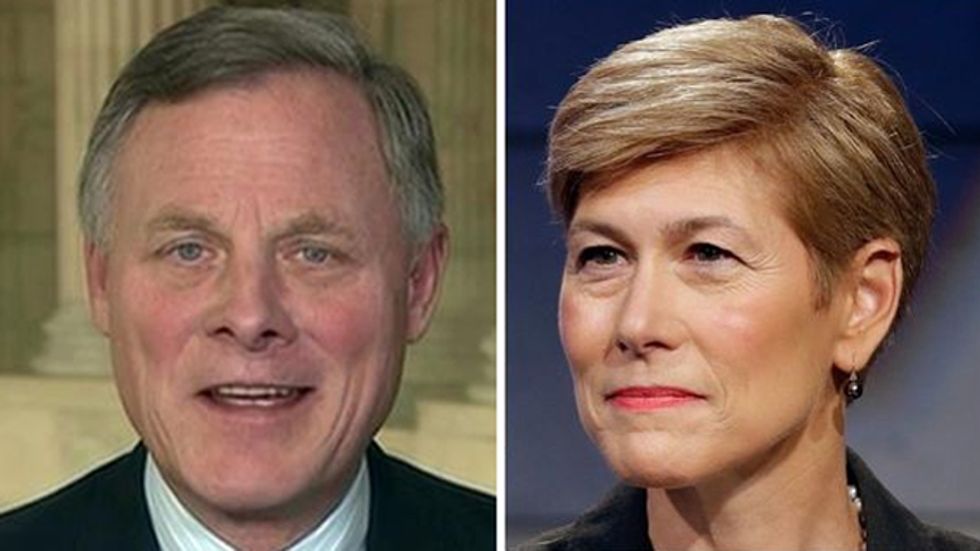 Head shots: They let you know who's running, but don't make for very funny captions. Darn.

Here's what's fun about this crazy election year: You normally wouldn't think of North Carolina as a state where both the presidential and Senate races are competitive for Democrats, but here we are in August and Hillary Clinton's leading in most polls, and in the latest NBC News/Wall Street Journal poll, two-term Republican incumbent Senator Richard Burr (no relation to Aaron or Raymond) is down by two points to his Democratic challenger, former state Rep. Deborah Ross.

Also in trouble is Republican Gov. Pat McCrory, who gave the state a big black eye by signing HB2, the trans panic bathroom bill, as well as a slew of restrictions on voting that were recently tossed out by a federal appeals court because they "target African-Americans with almost surgical precision." Remember how that nice Republican fellow pretty much admitted that was the goal on the "Daily Show" and had to resign his job as a GOP precinct chair?

Funny how people remember that stuff.

So anyhoo, Sen. Richard Burr. He hit Yr Wonkette's radar way back in 2009 when we learned that his first reaction to the financial crisis of 2008 was to send his wife down to the ATM and withdraw everything she could so they could start their very own one-family run on the bank, possibly a really stupid thing to do for a senator from a state that's home to a major national bank's corporate HQ. But he was just looking out for his fambly, he said later:

Given that he's a smart Republican senator and all, you'd think he'd have either more faith in the FDIC, or at least a cache of gold coins and guns buried in the hills. (And yes, it's just "ATM," not "ATM machine," don't fill up half the comments nitpicking that to death or we'll take away your PIN number, OK?)

Burr made national news as a know-nothing doofus when, in a 2014 hearing, he tried to get Toronto doctor Danielle Martin to admit that the Canadian single-payer health plan was losing doctors left and right, and that wait times were so bad that government officials were rushing off to the USA so they wouldn't die while waiting for surgery. Except no, that's not actually the case at all, and Dr. Martin gave the Senator a pretty impressive schooling. We're still rather pleased with how CBC Radio’s As it Happens introduced their story on the hearing:

Republican Senator Richard Burr did not ask things like, "What makes your system work so well?" or "How can we Americans be more like you?"

Here is how it went instead:

We know Wonkers are sometimes averse to watching the videos here, since they may have Santorum in them, but you really need to watch her take apart every premise of Burr's questions, including the one about former Newfoundland premiere Danny Williams, who did indeed choose to have a heart valve replacement done in Florida, where he owned a vacation home. While the anecdote has been touted as "proof" that socialized medicine is deadly, the LA Times noted that Williams’s decision “is widely viewed in Canada as a rich man’s failure to investigate the care available to him closer to home.”

Then there's the beautiful moment where Burr deploys what he surely thought was his best Gotcha of all, only to be counter-gothcha'd by the wily Canadian:

BURR: On average, how many Canadian patients on a waiting list die each year? Do you know?

MARTIN: I don’t, sir, but I know that there are 45,000 in America who die waiting because they don’t have insurance at all.

Though it's not in the video above, Burr, that charmer, immediately explained how we do health care access here in the land of the free: "The American system has access to healthcare for everybody; it’s called the emergency room." 'Murica!

In other great moments from Burr's career, he was one of a trio of Senate R's who in 2014 proposed an actual bill to replace Obamacare, which would have replaced the oppression of the Affordable Care Act with a freedom-loving middle-class tax hike by making employer-paid insurance benefits taxable. Somehow, that never went anywhere. Burr does get some credit, however, for calling other Republicans' insistence on shutting down the government in 2013 with the goal of defunding Obamacare “the dumbest idea I’ve ever heard of.” So he gets exactly one point for that. Otherwise, he's your standard issue rightwing Republican, and we're done with him. North Carolinians would certainly be welcome to add other examples of his awfulness in the comments, if we allowed them.

On the Democratic side, as the polls look better for Hillary Clinton and worse for Donald Trump in North Carolina, there's corresponding buzz about Deborah Ross, former Majority Whip in the state House when Democrats held the majority. She's actually beaten Burr in fundraising for the last two quarters; that, and her lead in the NBC/WSJ Poll have led several prognosticators (which is the pointy end of a mosquito, we believe) to change their predictions for North Carolina: Cook Political Report and Real Clear Politics now rate the North Carolina Senate race a toss up, while Rothenberg Rating rates it toss up/tilts Republican. An August 10 PPP poll found a slight lead for Burr, but also showed he has high negatives:

Burr is not popular, with only 28% of voters approving of the job he's doing to 39% who disapprove. But Ross is still pretty much unknown, with only 39% of voters having an opinion about her one way or another. Burr's weak numbers make voters open to the possibility of replacing him, but they'll have to learn more about Ross before they decide whether they think she's a better alternative or not.

Roll Call identifies the North Carolina race as one of the keys to Democratic hopes to retake the Senate:

The party is especially high on North Carolina, however, where Democratic nominee Deborah Ross has raised more than the incumbent Burr in two successive fundraising cycles [...] Ross has taken advantage of a liberal base in the state politically engaged by the controversy over state legislation banning transgender people from using their preferred choice of bathrooms.

“Nobody thought Burr was going to have real race,” Martha McKenna, a veteran Democratic strategist, said last week. “And Deborah Ross has done a great job.”

And just Friday, the National Review ran a piece fretting that Burr's campaign is in deep doody, thanks to the unpopularity of Trump at the top of the ticket and McCrory in the governor's race.

Ross is running on exactly the kinds of bread and butter issues you'd expect from a purple-state Dem; you've got your pay equity for women, your minimum wage increase, your infrastructure. She knows what the "digital divide" is and proudly says she worked to get broadband to both urban and rural North Carolina families, which ought to go over well in the state's research triangle area. What's more, she thinks climate change is real, and is into the whole clean energy thing (which by the way, so is Yr Wonkette, who can't miss the chance to plug our partnership with Arcadia Energy, only very subtle-like).

Also, we figure she must be doing something right for the National Republican Senatorial Committee to be worried enough to create its very own amateurish-looking (for "that grassroots feel") website calling her "Radical Ross," where we learn that as a supporter of the ACLU, she just loves burning the Flag whenever she can. The site also warns she's "raking in support from some of the most extreme special interest groups including Howard Dean’s progressive group Democracy for America (DFA), Planned Parenthood, and EMILY’s List." The Horror. The Horror.

The NRSC -- the geniuses who brought us the Twitter abomination complaining that Tammy Duckworth "has a sad record of not standing up for veterans" -- also released a very special Snapchat filter that nobody in their right mind would have used, because 1) it looked like poop and 2) it was available only for the weekend of the North Carolina Republican convention. But it did have cool cartoons of a woman who looks nothing like Ross stomping on North Carolina and getting ready to burn a flag:

So that's some pretty potent stuff there. Here's hoping Ross can somehow withstand these withering attacks and prevail against the brain trust behind those.

Want to help Deborah Ross turn North Carolina a pleasant shade of blue? Here's her ActBlue donation page! And if you'd like to ensure Yr Wonkette has an adequate supply of coffee as we look at every single Senate race of 2016, you can hit our tip jar right here. Unlike with the campaign donations, you don't even have to be American!