Senate Sunday: Will Beto O'Rourke Beat Ted Cruz In A Boat? Will He Beat Him With A Goat? 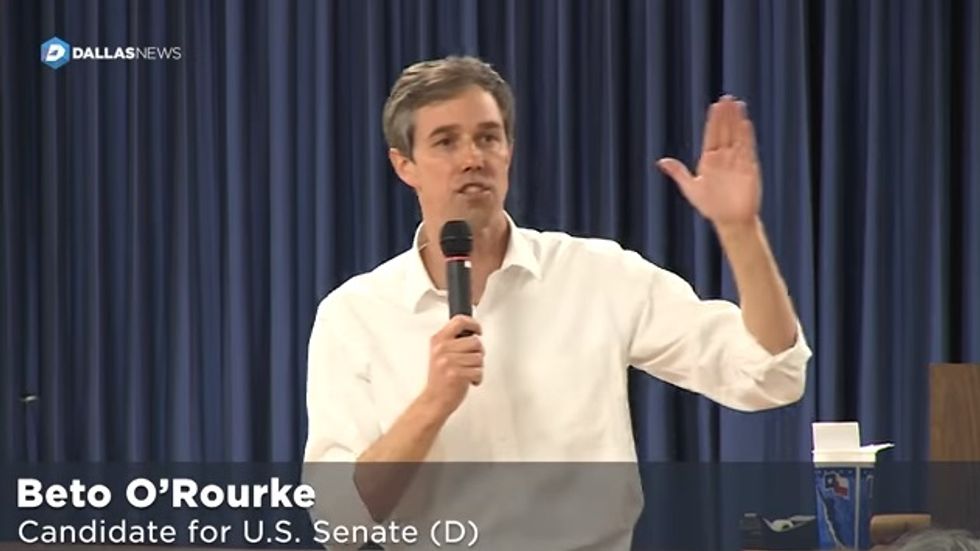 Texas holds its primary elections on Tuesday, and here's a little factoid that should gladden your bruised cynical hearts, O ye Wonkers: For the first time in a quarter of a century, Democrats are running candidates for every single one of Texas's congressional districts. In freaking Texas. And the likely winner of Tuesday's Democratic primary for US Senate, congressman Beto O'Rourke, simply swamped Ted Cruz in fundraising for the first month and a half of 2018:

The Republican also spent more than he raised — nearly $1.2 million, while O’Rourke burned through roughly $2 million in his bid to unseat the powerhouse incumbent.

Cruz still has more money overall, but the three-term Democrat from El Paso seems to have Cruz running, if not scared, at least with an extra nervous chuckle in his smarmy little laugh. Don't be surprised if the general election gets ugly. After largely not saying much of anything about the Dem challenger, the Cruz campaign reacted to the news about O'Rourke's fundraising success (he also outperformed Cruz in the two previous six-week reporting periods) with predictable red-meat slobber:

"Chuck Schumer did a great job. He came to Texas early in the year and got national liberals really excited about the chance to elect a pro-amnesty, anti-gun, pro-big government liberal to represent Texas," said spokeswoman Catherine Frazier. "We don't believe that's the direction Texans want and are confident this will energize them to ensure they turn out to vote for someone who wants to keep taxes low, keep repealing regulations including Obamacare, and uphold the Texas values that have made and kept our state strong."

Cruz himself has been warning Republicans about all the scary Democrats who will, like a horde of zombies, threaten all that's good and holy and Republican; at a mid-February event, Cruz said Democrats will "crawl over broken glass in November to vote” and raised the specter of Republicans getting "obliterated at the polls." With votes, as a matter of fact.

Is Lisa Simpson a Demmycrat? You're damn right she is!

Let's hear it for scaring Republicans a little, huh? None of this means that O'Rourke will have an easy time knocking off Cruz, who despite being personally grating, detested by many in his own party, and thoroughly incapable of understanding "The Simpsons," nonetheless has most of the advantages for November. Cruz may just be finishing up his freshman term, but he is the incumbent -- and the second-place finisher in the 2016 Republican primaries. He also has a huge fundraising machine, plenty of national Republicans who'll grit their teeth and endorse him, and all the advantages that Texas Republicans can use to leverage the electorate -- while gerrymandered districts shouldn't hurt a statewide candidate, they could certainly influence turnout, and Texas is still fighting to preserve its vote-suppressing voter ID law against court challenges.

Sad Ted Cruz Phone-Banks For 'Nominee' He 'Supports,' Whomever That Might Be, No Way To Know

Hello, this is Ted Cruz. Have you seen my manhood anywhere?

Still remaining to be seen: whether Donald Trump will campaign for the guy he called "Lyin' Ted" (even Trump gets things right now and then), and if he does, whether Trump's grudging support will help or hurt the lying little weaselboy. Either way, expect that video of Sad Ted Cruz trying to choke back tears while campaigning for Trump to resurface a lot this fall.

It almost goes without saying that Ted Cruz is among the most-hated political figures in America, but we sure do enjoy saying it. Even in the One-Star State, he's not especially well-liked: While he's got near universal name recognition, his "favorable" rating in a February poll actually ran slightly behind the "unfavorable" rating, 40-42 percent. And while his "very favorable" and "somewhat favorable" ratings were nearly the same (21 and 19 percent respectively), those who dislike Cruz really dislike him: 31 percent "very unfavorable" and just 11 percent "somewhat unfavorable." Of course, in a state where actual voter turnout consistently skews Republican, Cruz fundamental unlikability won't necessarily hurt him or help O'Rourke. As we saw with Roy Moore, Republicans will overlook a lot, so merely being loathsome might not hurt Cruz at all.

What does Beto O'Rourke have going for him, apart from not being Ted Cruz? For one thing, he's running as a grassroots-driven candidate, eschewing PAC money and campaigning all over Texas -- even in areas where Democratic candidates seldom show up -- he's on track to visit all of the state's 254 counties. And he's got a pretty good pitch for Texans who may be tempted to think a Democrat simply doesn't have a chance in Texas, as he says in the video up top: "Texas is not a red state, it's a nonvoting state." If early primary voting is any indication, Texas Democrats are pumped up: As Vox notes,

Democratic turnout has increased by 90 percent compared to the 2014 midterms and is even above the 2016 presidential election year levels. Republican early voter turnout is up by 17 percent from 2014 but still lagging behind 2016 turnout.

That's encouraging; the trick of course will be to keep that momentum going through the fall. O'Rourke sure seems to have the campaigning chops and people skills (yes, we said it, deal) to connect with voters, too. As this profile at The Ringer notes, O'Rourke campaigns like crazy, making multiple stops daily and burning out his campaign team's phone batteries with all the video they upload to Facebook. He's also not at all apologetic about his early days as the bassist of a punk rock band -- as the profile notes, he's more inclined to rock metaphors than sports metaphors:

A woman at the Sealy town hall asked O’Rourke how he’d be different not only from Republicans but establishment Democrats, and O’Rourke answered by talking about how, in searching for more authentic music, he’d discovered punk rock as a teenager and started a band of his own.

“What we were rejecting, unwittingly, and I wouldn’t have put it this way, was corporate rock-’n’-roll,” he said. “I don’t want you, in New York or L.A., deciding what I was going to listen to in El Paso. We in this campaign are rejecting corporate politics, literally rejecting corporate donations filtered through PACs, the special interests, and yes, the party bosses. I don’t want to know what their focus groups say, or their polls show, or their consultants have tested for me to repeat here. I want to know what’s on your mind.”

And yes, one of his big national interviews was with Spin magazine, because that's where you get your punk rock politics. We're glad we checked that out, since it included this video of a truly bipartisan performance: his band playing on, of all things, a cable-access Jesus show:

Policy-wise, O'Rourke is a Texas Democrat, which means he wants universal, single-payer healthcare, but he's also willing to get there incrementally, if that's how it has to be done:

“This idea that everybody should be able to see a doctor, and that being well enough to do whatever you’re supposed to do in life: to finish your studies, to work that job, to start that business, to write that novel, that that is good not just for the person, it’s good for the state and the country. So, what’s my vision? Universal health care. And very likely that will involve some form of a single-payer system, some expansion of Medicare, perhaps from where it is right now at 65, all the way down to zero.”

That vision sounded positively socialist. At least it did until he described it as an incremental, ideally bipartisan process.

“Or, I’m open if somebody’s got a better way to do this—including and especially Republicans—I’m open to their vision for how to get there,” he said. “I won’t allow the perfect to become the enemy of the good.”

He wants a smaller US military presence in the Middle East, and he wants to end the War On Drugs and its cousin, mass incarceration. He thinks that if Jeff Sessions really starts cracking down on legal weed in other states, that could actually push voters in red states to get to the polls in reaction -- even though Texas doesn't yet allow even medicinal weed, polls show an increasing majority of Texans support it. O'Rourke has a 100 percent rating from Planned Parenthood, and has demanded that ICE stop trying to limit access to abortion for women and teens in immigration detention.

On immigration, he wants passage of the DREAM Act and a pathway to legal status or citizenship for undocumented migrants who are already here. He also would like to see ICE demilitarized, for godssake, and to protect people seeking asylum and refugee status.

On education, he's very firm: No tax money for private schools. He wants less emphasis on high-stakes testing, and protections for teacher pensions.

On energy and the environment, O'Rourke favors rejoining the Paris climate agreement, and he thinks science is real -- a refreshing change from Ted Cruz, who thinks Earth is the only planet NASA shouldn't be allowed to study. O'Rourke thinks the EPA should actually protect the environment, which is a refreshing change from the senator who currently represents Big Oil.

What really excites us about Beto O'Rourke is that he is all about building the Democratic party, and progressivism, from the bottom up:

“There’s been a version of [trickle-down economics] in politics; you focus on the top of that ticket and good stuff’s gonna happen,” O’Rourke said. “What if we went the other way around and focused on those at the grass-roots, street, door-to-door level? I think when we do that, we’re gonna see something really amazing spring up toward the top.”

Finally, something Wonkette readers should truly appreciate: On the campaign trail, Beto O'Rourke has been plenty willing to drop the F-Bomb when necessary:

Beto O'Rourke: Fuck Yeah! Shower some money on Beto right there, won't you?

Yr Wonkette is supported by reader donations. Please click here to help us count down ALL the 2018 Senate races, you filthy fuckaducks. And remember, send some dollars to Beto!>