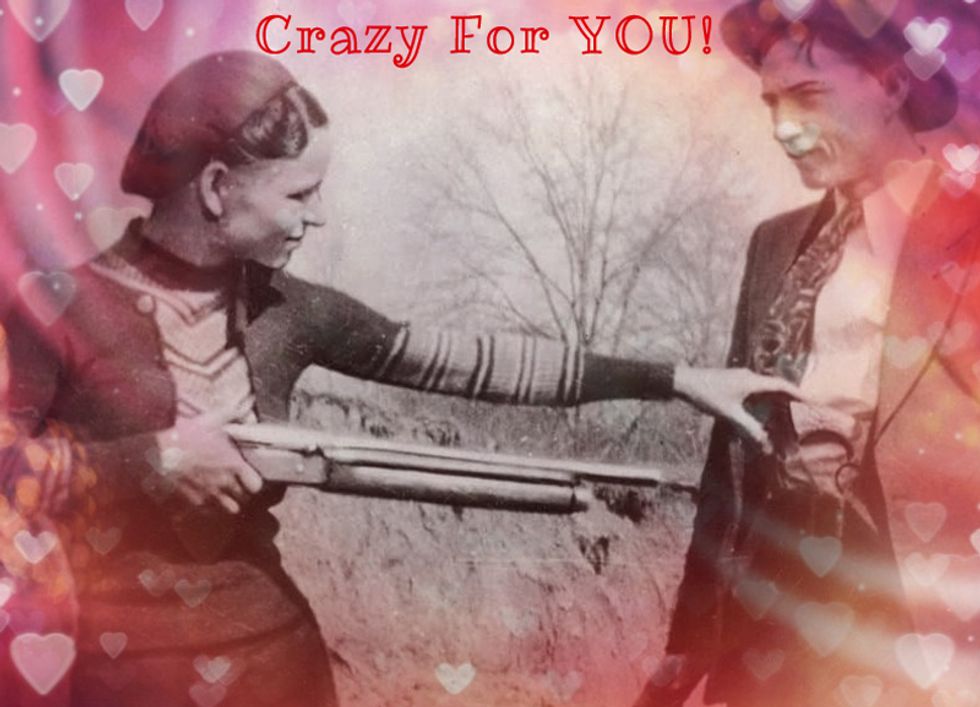 Not sure what to give your lover who is too mentally ill to manage their own affairs? The U.S. Senate has a great idea -- they'll be voting today to undo an Obama administration law that would have included the names of Social Security recipients with severe mental impairments to the federal firearms background check system. Not just anyone with a mental illness, mind you, because YES WE KNOW not all mental illnesses make people dangerous -- only people who are so mentally unstable that they need a third party to manage their affairs for them. The House already passed a bill repealing the regulation, using that awesome little 1996 turd of a law called the Congressional Review Act (CRA), the very same law that Congress wants to use to make it legal for mining companies to dump toxic crap into streams without having to clean it up! Here's Rachel Maddow with a 'Splainer!

This makes perfect sense, you see, because while whenever there's a mass shooting, the NRA insists we need to do something about mentally disturbed people, when it comes to keeping guns out of the hands of the severely mentally ill, well now you're talking a whole different dealio! Consider the thoughts of Iowa Republican Sen. Chuck Grassley, who believes this is nothing but unfair discrimination against disabled people:

He said that the mental disorders covered through the regulation are filled with "vague characteristics that do not fit into the federal mentally defective standard" prohibiting someone from buying or owning a gun.

Grassley cited eating and sleep disorders as examples of illnesses that could allow a beneficiary to be reported to the background check system if they also need a third party to manage their benefits.

"If a specific individual is likely to be violent due to the nature of their mental illness, then the government should have to prove it," Grassley said.

You know, we're not entirely certain there are a lot of people with such severe sleep disorders they can't manage their own affairs, but if their sleep disorders really are that bad, maybe we shouldn't have Ol' Drowsyhead walking around with a shootin' iron. It's a thought, at least.

Bleeding heart Dem Chris Murphy of Connecticut, where the Sandy Hook mass shooting was blamed on a guy who was severely mentally ill, went and got all bleedy-hearty over the prospect of making it easier for people who can't take care of themselves to take care of whoever they think needs to be shot, saying he wasn't sure how he'd explain to his constituents:

"If you can't manage your own financial affairs, how can we expect that you're going to be a responsible steward of a dangerous, lethal firearm," Murphy said.

Sen. Ron Wyden, D-Ore., argued that people who think they're treated unfairly can appeal, and are likely to win if they're not a danger to themselves or others. But Grassley said federal law requires a formal hearing and judgment before depriving someone of owning a firearm due to mental illness.

"The Second Amendment, as a fundamental right, requires the government to carry the burden to show a person has a dangerous mental illness," Grassley said. "This regulation obviously and simply does not achieve that."

As everyone knows, just because you can't manage your own money is no reason you should be kept from buying a semi-automatic rifle and all the rounds of beautiful .223 caliber ammo you might need. Heck, maybe you can't balance a checkbook, but does that mean you can't fill a magazine with copper-jacketed rounds? It stops taking bullets when it's full, so you don't even really need to be able to count.

In reality, it's not likely the bill will have a great effect on gun sales one way or the other, since as a Chicago Tribune editorial calling for keeping the ban notes, only about 75,000 people nationwide would be affected. So why not err on the side of individual rights, and let those folks get guns if they want? They deserve the same right to shoot up a classroom as anyone else.

If the Senate passes its version of the bill, President Trump is expected to sign the measure, making the lives of America's mentally incompetent people a lot easier and safer. What could be more romantic than the deep abiding love between a paranoid schizophrenic, his AR-15, and the voices telling him to kill?