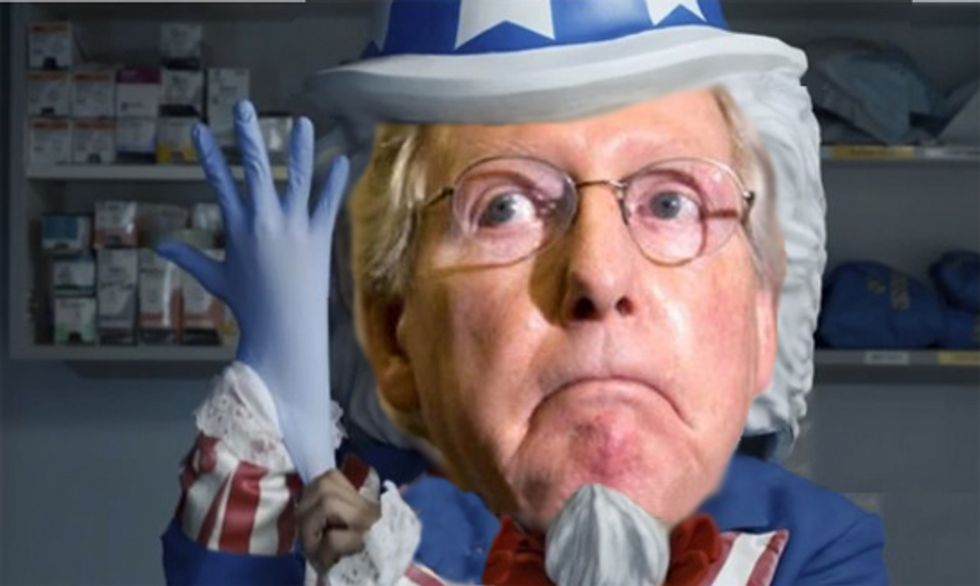 The Congressional Budget Office's analysis of the Senate's plan to murder Obamacare (and a bunch of poor people) came out Monday, and confirmed that the Senate bill has "heart," just like Donald Trump wanted. Only problem is that it's a heart of stone. The plan would leave 22 million more Americans without insurance by 2026, with 15 million extra uninsured just next year. Sounds like a great opportunity for Americans to rededicate themselves to self-reliance -- sales of leeches and poultices are expected to skyrocket, with an indirect investment opportunity coming in the torch-and-pitchfork sector.

The biggest funding cut will be in the Medicaid program: The Senate's plan, named with dark irony the "Better Care Reconciliation Act" (BCRA), will roll back Obamacare's expansion of Medicaid and then also chop funding for the rest of Medicaid as well, with about $800 billion (that's BILLION) in cuts over the next decade. People buying individual insurance on the state exchanges will receive smaller subsidies, and will also have higher premiums and deductibles. The higher costs of plans on the individual market would hit older, poorer Americans the hardest, and the CBO predicts that “few low-income people would purchase any plan” at all. Also, just to make things fun, the CBO estimates that 4 million people with employer-provided insurance would lose their coverage next year thanks to the repeal of the mandate for companies with over 50 employees to provide insurance. That's some better care, huh?

Also, get ready for the Republican talking point: The biggest immediate drop in coverage would come because of the end of the Affordable Care Act's individual mandate, meaning many of the 15 million who lose insurance in 2019 would choose to drop their plans because there's no longer a penalty for not having insurance. See, it was a free choice, the Rs will say, conveniently overlooking the point that those people will still be uninsured, and in the event of a health emergency, will be less able to pay for it. Off to the ER they'll go, where they may or may not be able to pay, and then healthcare costs overall will increase, hooray for the free market and individual responsibility.

Vox offers this chart that explains in one red dotted line the effect of the Republican plan to kill the ACA:

Your Shit Sandwich is ready, America!

The CBO analysis takes into account a move Senate Republicans made Monday to fix one of the most glaring holes in their first draft, released last Thursday: The first version of Better Hope You Can Get Care simply dropped the individual and employer mandates to purchase health insurance and replaced it with nothing, which could have led to many younger, healthier people dropping their coverage altogether, leaving mostly older, sicker people buying insurance on the exchanges. That's a recipe for a "death spiral" as premium costs would go out of control and companies would drop out of the market. So Monday, the Rs added a replacement for the ACA's tyrannical requirement that everyone buy insurance: Starting in 2019, anyone going without coverage for two consecutive months would face a six-month waiting period before they could be insured through the state exchanges, which would presumably persuade enough people to keep coverage that there'd be no death spiral, at least not right away.

That small change in the plan wouldn't do anything to address the much larger problems the Senate bill introduces to the individual market, especially higher premiums and deductibles for far crappier plans, but it would keep the whole thing from falling apart immediately. So it's still a shit sandwich, only on a slightly more robust bun instead of damp white bread, so Republicans could say "LOOK AT THAT GREAT BUN" and hope everyone forgets to notice the sandwich is still full of shit.

About those premiums on the individual market: The bottom line is that the Senate plan proposes a baseline plan for most buyers that would cover only 58% of the actual costs of medical services. That's actually lower than the actuarial value of the most minimal "bronze" plans under Obamacare, which cover 60% of costs and have the highest deductibles. Under the ACA, a baseline plan is at the "silver" level, covering 70% of costs with a manageable premium (subsidized based on income) and a fairly low deductible. Here's why that change matters, according to the CBO analysis:

Under this legislation, starting in 2020, the premium for a silver plan would typically be a relatively high percentage of income for low-income people. The deductible for a plan with an actuarial value of 58 percent would be a significantly higher percentage of income — also making such a plan unattractive, but for a different reason. As a result, despite being eligible for premium tax credits, few low-income people would purchase any plan, CBO and JCT estimate.

Translation: Forget the lie that Better Not Expect Us To Care would actually keep insurance affordable for lower-income people. One of the selling points some Republicans have made for their plan is that the cuts to Medicaid won't hurt to much, since the BCRA would extend eligibility for subsidies even to people living below the poverty line who don't qualify for Medicaid. This would, in theory, help fix a coverage gap under the ACA that resulted when many states refused to expand Medicaid. Except, not really, because the BCRA's subsidies are lower for everyone, and the minimal subsidized plans available to low-income people would have deductibles as high as $6000. That's a hell of a lot for cheap, crappy insurance that doesn't cover much.

So, in the CBO's example (on page 27 of the analysis), someone with an income at 75% of the poverty level ($11,400 in 2026) would have a deductible that's more than half their annual income. They'd be broke before actually being able to use their crappy insurance, so why would they even buy insurance? As the CBO points out, "Many people in that situation would not purchase any plan, CBO and JCT estimate, although some people with assets to protect or who expect to have high use of health care would."

The CBO also notes that the BCRA wouldn't fix one of the problems with the ACA that Republicans have fixated on: In a few markets, insurance companies have left the individual market altogether (often due to uncertainty about whether the Trump administration will actually fund the law's subsidized plans). Funny thing. Under the BCRA,

In the agencies’ assessment, a small fraction of the population resides in areas in which—because of this legislation, at least for some of the years after 2019—no insurers would participate in the nongroup market or insurance would be offered only with very high premiums.

Oops. Maybe if blowing up care for 22 million people wouldn't even fix that problem, we should find other solutions, maybe? (Yes, single payer. But there are plenty of possible fixes to Obamacare, too.)

Even before the CBO score was released, the American Medical Association came out against the bill (as have other professional groups), saying that Better Care (Maybe Than Somalia) is just plain evil (OK, we paraphrase, but not much), saying,

Medicine has long operated under the precept of Primum non nocere, or "first, do no harm." The draft legislation violates that standard on many levels.

Just how much harm could result from 22 million extra Americans going without insurance? (That's just a couple million short of the population of Australia, by the way.) Studies on the correlation between mortality and the lack of insurance suggest as many as 24,000 Americans a year might die from untreated illnesses. That's more than are killed by gun homicides annually. Plus HIV and skin cancer, while you're at it.

On the other hand, people in the top 4% of the population would get a whopping tax cut, so it seems like a fair trade-off.

Yr Wonkette is supported by reader donations. Please click the "Donate" linky below, and for Crom's sake call your senators. Again.