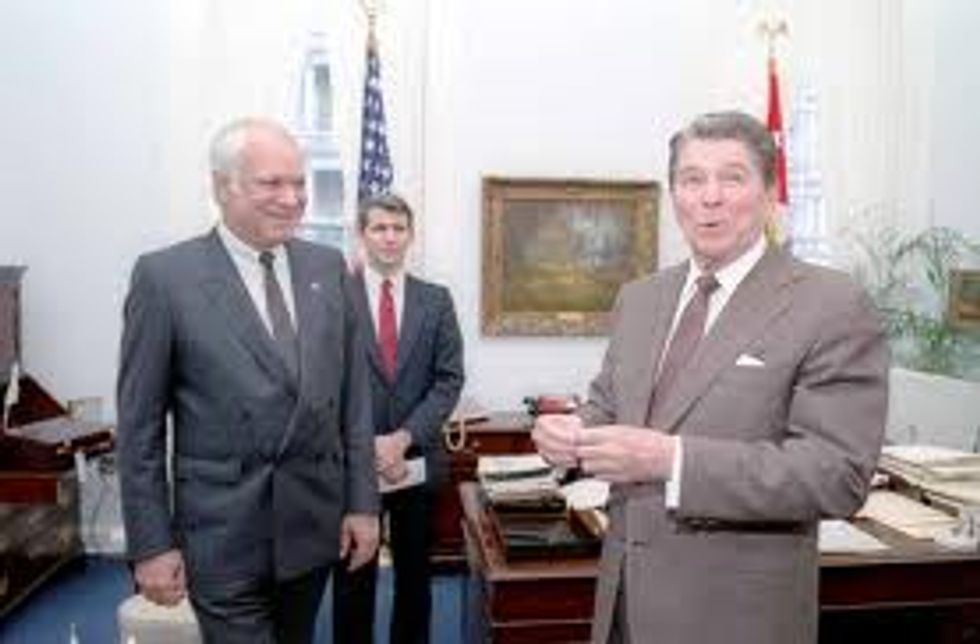 Your Wonkette has been kept awake at night, dear readers, upon learning that national treasures like official mayor-of-all-things 9/11 Rudolph Guiliani, former attorney general Michael Mukasey, former intelligence official Michael V. Haydn, and a bunch of very important K-street lobbying firmswere under investigation due to their advocacy for the terrorist group Mujahedeen Khalq (or MEK). Luckily, however, the federal investigation of MEK bypassed K-street lobbyists in March and now, rather than indict anyone for materially supporting terror, the state department appears ready to do the Right Thing and take the MeK off the list of terrorist groups.

According to Jay Solomon and Evan Perez at the Wall Street Journal,

WASHINGTON—The Obama administration is moving to remove an Iranian opposition group from the State Department's terrorism list, say officials briefed on the talks, in an action that could further poison Washington's relations with Tehran at a time of renewed diplomatic efforts to curtail Iran's nuclear program.

And who would know better than “officials briefed on the talks”? Besides the lobbyists, I mean. Anyway, it's cool, so what if they did some messed up stuff, maybe killed a few Americans, had anti-American views. No big deal, man. That was in the PAST, man. Quit living in the PAST. Let’s just go ahead and let bygones be bygones, amiright? They've been trying REALLY HARD to turn things around for the past two years.

The MeK has engaged in an aggressive legal and lobbying campaign in Washington over the past two years to win its removal from the State Department's list. The terrorism designation, which has been in place since 1997, freezes the MeK's assets inside the U.S. and prevents the exile group from fundraising.

Of course, the best way to solve a misunderstanding with a terrorist group is to negotiate with them. This has long been the cornerstone of our foreign policy and our go-to tactic when coping with the challenges posed to the existing global order by transnational armed groups. (See: Reagan, Ronald; Contras; Iran.) Surely we can just talk this one out.

Senior U.S. officials said on Monday that Secretary of State Hillary Clinton has yet to make any final decision on the MeK's status. But they said the State Department was looking favorably at delisting MeK if it continued cooperating by vacating a former paramilitary base inside Iraq, called Camp Ashraf, which the group had used to stage cross-border strikes into Iran.

Well, if “senior U.S. officials” say something to the Wall Street Journal, it must be true. Now that we’ve heard from “senior U.S. officials” and “officials briefed on the talks,” maybe “other officials briefed on the talks” will be willing to help us understand why we should be offering our congratulations to MeK for getting off the list. If, of course, the Wall Street Journal would be willing to give these officials anonymity for no clearly discernable reason and then uncritically write down what they say.

Other officials briefed on the MeK issue said Mrs. Clinton purposefully tied the closing of Camp Ashraf to the designation issue to defuse a thorny diplomatic issue between Washington and Baghdad. The U.S. military had provided security at the camp before pulling its forces from Iraq last year. Baghdad now controls the camp and has threatened to return MeK members to Iran if it isn't swiftly closed.

Ah ok. There's now near unanimity between the "officials briefed on the MeK issue," "officials briefed on the talks," "other officials," and "senior U.S. officials." You really can't ask for more than that. But your Wonkette is still skeptical. Isn’t terrorism kind of…bad? Shouldn’t we be careful about allowing such a designation to ride simply on the political sophistication of the group’s constituent members, and their ability to work within established institutions and networks of power?

The group, despite its history of terrorism and anti-Americanism, reoriented itself after Saddam Hussein's 2003 fall and the capturing of Camp Ashraf by U.S. forces. The MeK renounced violence and turned over its weapons. And it has cooperated with the U.S. and U.N. in gathering intelligence on Iran's nuclear program. This ideological shift by the MeK has been accompanied by an intensive lobbying campaign on Capitol Hill. A number of former senior U.S. officials said they were offered payments to speak on behalf of the MeK, including James Jones, President Barack Obama's former national security adviser, and James Woolsey, the former head of the Central Intelligence Agency.

Critics of the MeK allege that the organization has no major support inside Iran and that its leaders, who are based outside Paris, run the group like a cult. They also worry that any perceived U.S. support for it could undercut the Iranian opposition, known as the Green Movement, which pushed for democratic change during 2009 street protests.

Still, the organization has large support on Capitol Hill. And some lawmakers are seeking to use the possible delisting of the organization to begin providing U.S. financial support. Congress took similar steps in the 1990s to provide funding to Iraq's opposition and, in particular, the exiled politician, Ahmad Chalabi.

Well, unnamed "critics of the MeK," whoever you are, if we’ve learned anything in the past 12 years, it’s that “some lawmakers” really have their fingers on the pulse of the international scene, so there's that. And also, nothing can go wrong when you provide funding for an opposition leader. Nope, nothing at all. [NYTimes/WSJ]