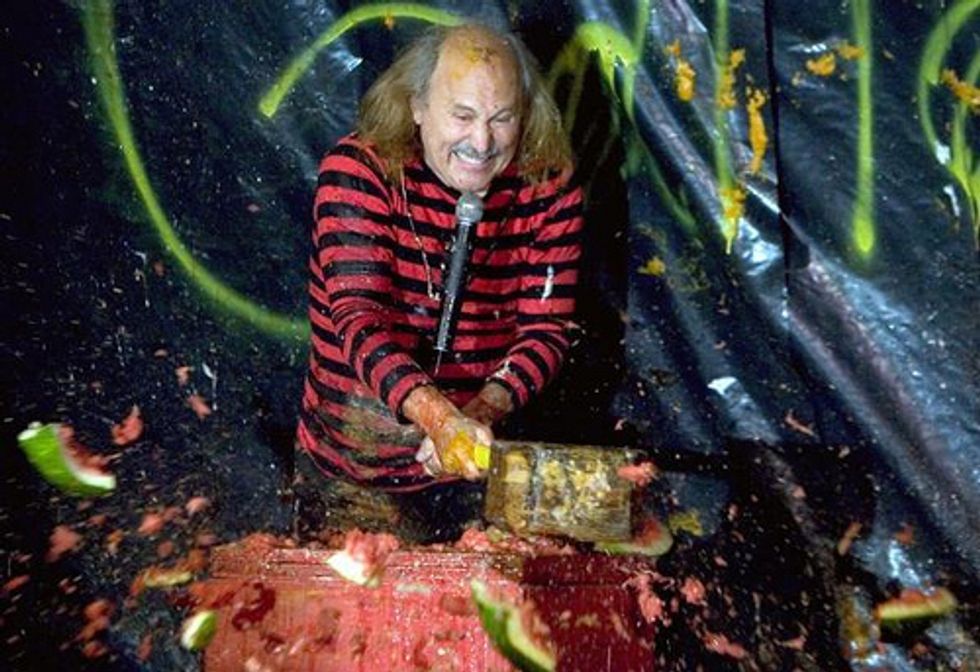 On the news that legendary prop comic Gallagher has suffered his second heart attack in two weeks, Your Wonkette is reminded of this classic piece of Journalism from Seattle's The Stranger, in which intrepid reporter Lindy West sat through Gallagher's horrifying "comedy" show, which seemed to have been two hours of dick-lickin' homophobia and not-that-coded racism. Apparently, it was sort of like listening to "entertainer" Rush Limbaugh.

"Hey, President Obama," he spits out the name like a mouthful of burning hair. "You ain't black. I don't care what you say—you're a latte. You're half whole-milk. It could be goat milk—you could be a terrorist!" I am too busy losing my mind to catch the next joke, which is about Ted Kennedy's brain cancer. Aaaaand we're off.

Gallagher is upset about a lot of things. Young people with their sagging pants (in faintly coded racist terms, he explains that this is why the jails are overcrowded—because "their" baggy pants make it too hard for "them" to run from the cops). Tattoos: "That ink goes through to your soul—if you read your Bible, your body is a sacred temple, YOU DIPSHIT." People naming their girl-children Sam and Toni instead of acceptable names like Evelyn and Betty: "Just give her some little lesbian tendencies!" Guantánamo Bay: "We weren't even allowed to torture all the way. We had to half-torture—that's nothin' compared to what Saddam and his two sons OOFAY and GOOFAY did." Lesbians: "There's two types—the ugly ones and the pretty ones." (Um, like all people?) Obama again: "If Obama was really black, he'd act like a black guy and get a white wife." Michael Vick: "Poor Michael Vick." Women's lib: "These women told you they wanna be equal—they DON'T." Trans people: "People like Cher's daughter—figure that out. She wants a penis, but she has a big belly. If you can't see your dick, you don't get one." The Rice Krispies elves: "All three of those guys are gay. Look at 'em!" The Mexicans: "Look around—see any Mexicans? Nope. They'll be here later for the cleanup." The French: "They ruin our language with their faggy words."