Serious Pundit Ron Fournier Blesses Us With A State Of The Union Viewing Guide, Oh Joy 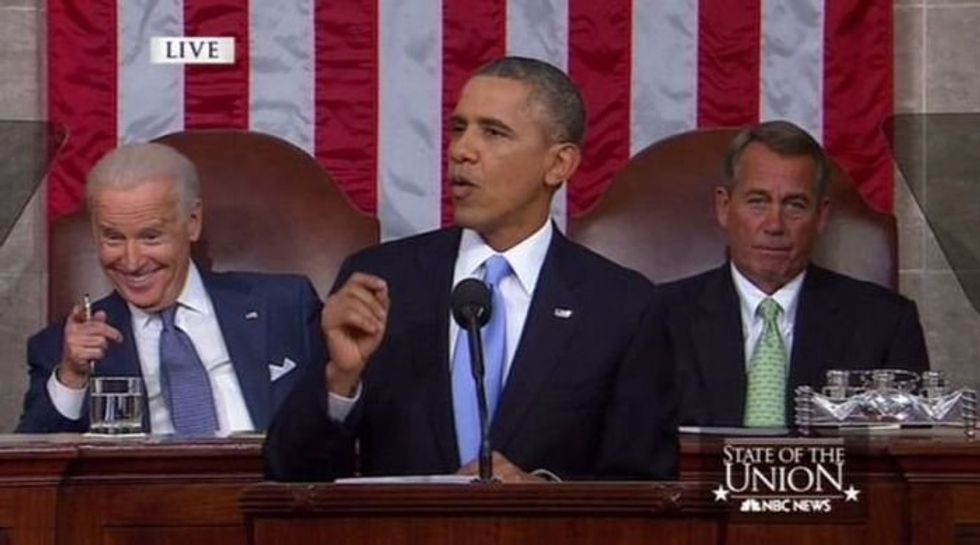 Bland centrist Ron Fournier, who seems to aspire to be David Broder without all the edginess, has graced us with some standards for judging Barack Obama's State of the Union address tonight. Needless to say, he thinks the Republican takeover of the Senate presents America with a beautiful opportunity for Democrats and Republicans to "begin governing together" like good boys and girls -- if only Obama doesn't poison everything by trying to enact his agenda. Fournier tut-tuts:

The state of the union is the status quo.

If you're OK with that, stop reading.

And so we did, and then we crossed ourselves and said a brief prayer of thanks that he'd given us an excuse to not finish his dumb column, the end.

But then we figured we actually had a "job" to do, so we went on reading, damn our eyes. Fournier has a simple set of questions to help us decide whether the president is planning on getting something done, or just being political, which is similar to getting something done except that it involves trying to enact policies that appeal to a discernible side.

Close your eyes, set aside your opinion of Obama, and objectively listen to a chunk of the address. Does he sound like a college professor -- dismissive, dour, arrogant, and argumentative? Or does he sound like a preacher -- inspirational, inclusive, optimistic, and humble? The latter approach is the mark of a great leader.

Of course, if he preaches too vigorously, he's partisan, and we can't have that, now can we? Fournier also thinks that Obama's plan to tax the super-wealthy to pay for a tax cut for the middle class might have some promise, just as long as Obama doesn't do anything to alienate the super-wealthy and their Republican allies -- like raising taxes.

Fournier manages a pretty stunning inversion of reality in this next paragraph, where he warns us against the narcissistic tendencies of Barack Obama:

The pronouns:Count how many times Obama uses the words "I," "me," and "my." Compare that number to how often he says, "You," "we," "our." If the first number is greater than the second, Obama has failed. He needs to remember the lesson of Mitt Romney's 2012 campaign: Don't dismiss the 47 percent of Americans who disagree with him.

Um. Excuse me, but Romney didn't just dismiss those who disagreed with him in an opinion poll. He dismissed an entire swath of the population because they didn't make enough money to matter. That seems like a significant difference, somehow. But yes, shame on a president who wants to have his policies listened to.

Fournier closes with a pretty good observation about George W. Bush, who erred in "not asking Americans to sacrifice in the aftermath of 9/11." Similarly, he says, Obama never says anything about shared sacrifice -- and then Fournier notes that Obama has indeed given "lip service" to national service, what with the volunteer programs and all that, but apparently he's not sacrificey enough. Even worse, "In his hands, proposals for higher taxes smack of class warfare rather than shared sacrifice. Can he appeal to our better angels?" Gosh, if only Obama would frame that in terms of the rich paying their fair share, of all of us being in this together, or if he would somehow mention Warren Buffett's observation that it's absurd for a billionaire to have a lower tax rate than his secretary? It sure would be nice if Barack Obama would say exactly what he does say, only more bipartisanly, somehow.

Slate writer Jamelle Bouie noticed the real problem with Fournier's viewing guide -- and once he did, promptly got a very stern, completely predictable slow head-shake of disapproval from Ron Fournier, Guardian Of The Discourse:

Seriously, Jamelle Bouie. Why are you bringing such contentious, racially insensitive language to this serious discussion of our arrogant president?