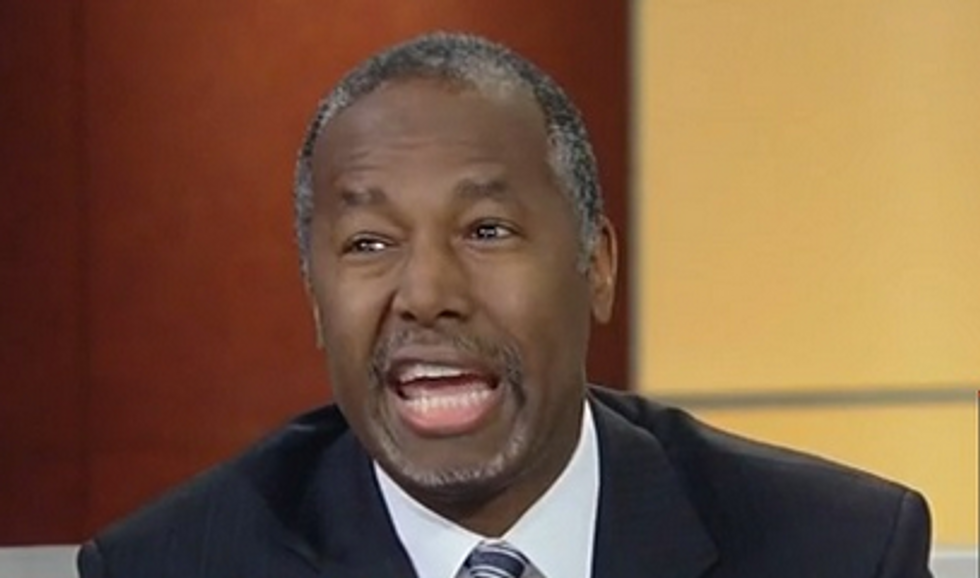 Does that make him craaaaaaazy?

Hey, Donald Trump picked Ben Carson to be his Secretary of Housing and Urban Development. Now, you may have been under the impression that Ben Carson wasn't interested in a cabinet-level job in the Trump administration, simply because his business manager and Sven Jolly figure Armstrong Williams told Reuters Carson wasn't interested in the job last month. However, in an interview on National Public Radio Monday, Williams explained that he'd really said nothing of the sort! Here's Williams in November, supposedly:

“Dr. Carson doesn’t feel like that’s the best way for him to serve the president-elect,” Williams told Reuters.

He said Carson would remain a close adviser of Trump and a friend. “His life has not prepared him to be a Cabinet secretary,” Williams said.

Williams was also quoted in the Wall Street Journal as saying Carson felt "the last thing he'd want to do would be to take a position that could cripple the presidency," but today, Williams insisted that quote was false, duh, because reality is whatever you say it is right now.

That was not accurate, by the way [...] Dr. Carson was always clear that his preference was to remain in private industry. He felt he could be more effective and supportive of the president-elect, but he also was clear that if Mr. Trump insisted that he wanted him in his cabinet, he would certainly give it serious consideration. My only comment was that there are many people who spend their lives running government agencies and bureaucracies, and could absolutely...be considered.

And no, that does not at all sound like Williams (who we should mention has quite an interesting history of doing paid propaganda) is backtracking furiously, no not at all. As to why a retired neurosurgeon who rose from poverty to become a respected physician and then a complete joke of a presidential candidate would be qualified to run a cabinet department that has nothing to do with medicine, Williams explains that the media doesn't know Carson at all (despite Carson's many self-promoting memoirs).

People don't understand about Dr. Carson that he's spent the last 25 years involved with his family and his things he's involved with, you understand that he has a lot of technical experience in areas of housing, he understands much more than you can imagine about finance and zoning and tax laws and banking policy and urban planning and these anti-discrimination laws.

Well, duh! This is a man who knows all about such things. What really qualifies Carson to run a housing agency is "his life," says Williams, since Carson grew up in public housing, especially since he grew up with a mother who was on welfare, but was never dependent on the government. Hence all the expertise in housing policy, which he probably picked up while doing brain surgery and pushing phony-baloney vitamin supplements.

The Media simply doesn't "get" Ben Carson, is the thing. For instance, they keep quoting things that he says, which is very unfair to him. Let us count the ways!

Just Because He Said ISIS Is Like The American Founders, He Didn't Mean They Are

Ben Carson Says ISIS Pretty Much Like American Founders, Except Maybe For The Wigs

Sure, maybe there was that time he directly compared ISIS to the leaders of the American Revolution, but as soon as he said it, he clarified that ISIS wasn't anything like the Founders:

“A bunch of rag tag militiamen defeated the most powerful and professional military force on the planet. Why? Because they believed in what they were doing. They were willing to die for what they believed in,” Carson told a luncheon audience of national committee members. “Fast forward to today. What do we have? You’ve got ISIS. They’ve got the wrong philosophy, but they’re willing to die for it while we are busily giving away every belief and every value for the sake of political correctness. We have to change that.”

Carson was very quick to pounce on the media for being ready to report on what he'd said, even as he was saying it:

Now I recognize that there’s press here and some of the press will say, ‘Carson said that ISIS is the same as the United States,'” he said. “They are just so ridiculous, so ridiculous.”

As we pointed out at the time, the real problem was that Carson thought he was being "deep" in suggesting that members of a revolutionary group were willing to die for their beliefs, which is pretty much true of all revolutionaries, except maybe during the spectacularly unsuccessful “Cowards’ Uprising” of 1743.

Also, Carson Never Said The USA Is Like Nazi Germany, Except For How He Said That

In that very same article, we noted that when Carson wrote an article for Breitbart titled "Exclusive – Dr. Ben Carson: Our Government Is Like 'Nazi Germany'," he didn't really mean that either:

[Carson] didn’t mean that the U.S. Government is like Nazi Germany when he said American political institutions are “very much like Nazi Germany. You had the government using its tools to intimidate the population. We now live in a society where people are afraid to say what they actually believe.” See? Totally different.

Why is the media so prone to distorting Carson's words by quoting him?

When Ben Carson Compared Homosexuality To Pedophilia And Bestiality, He Never Implied They Were Similar

Oh sure, fine. Maybe this one time Carson told Sean Hannity in 2013,

Marriage is between a man and a woman. It’s a well-established, fundamental pillar of society and no group, be they gays, be they NAMBLA, be they people who believe in bestiality -- it doesn’t matter what they are, they don’t get to change the definition.

But he wasn't saying they're similar, because he also added

gay couples “can even get it legalized so they can have visitation rights and property rights. They just don’t get to call it marriage … If you do it for one, you got to do it for the next one who comes along. And pretty soon it has no meaning. I don’t have any problem with gay people.

So he was only saying that if you legalize gay marriage, you'd have to legalize bestiality and pedophilia, not that they were similar.

You know what Carson actually said? It was VERY DIFFERENT. In 2015, he told New York magazine:

“Every time the liberal press does something about me, they say, ‘He’s the one who said Obamacare was worse than slavery,’” he said. “I never said that. I said it’s the worse thing since slavery.” (He did not note that he also said Obamacare “is slavery in a way because it is making all of us subservient to the government.”)

So maybe he actually said it was both the worst thing since slavery AND a kind of slavery, but he never said it was like slavery.

Sure, maybe Ben Carson condemned all the Muslims in New Jersey for partying when the World Trade Center fell on 9/11, and when a reporter asked him to clarify whether he actually meant New Jersey New Jersey, he said "yes," adding that he'd seen it on "the news... reels." Possibly at the premiere of High-Kickin' Broadway Follies of 2001, right before the new Betty Boop cartoon. But later he backtracked, and acknowledged he'd been thinking of "the protests going on in the Middle East and some of the demonstrations that were going on in celebration of the towers going down.” So that one hardly even counts, unless he said he heard Lowell Thomas announcing it.

Ben Carson: If The Jews Had Guns, The Holocaust Might Not Have Turned Out So :(

Again, this one's a matter of nuance. He only blamed the Jews of Germany a little tiny bit for letting themselves get Holocausted to death. On CNN, Wolf Blitzer went and Gotcha'd him, the way the media will, so unfairly:

“Just clarify, if there had been no gun control laws in Europe at that time, would six million Jews have been slaughtered?”

Carson replied: “I think the likelihood of Hitler being able to accomplish his goals would have been greatly diminished if the people had been armed … I’m telling you that there is a reason that these dictatorial people take the guns first.”

Now, leaving aside the fact that this is a favorite rightwing lie -- Hitler loosened gun control laws compared to the Weimar government, but did confiscate weapons from Jews -- it's also a tad ridiculous to think Germany's Jewish minority could have fought off the whole Wehrmacht with pistols and hunting rifles. But he later apologized for downplaying the Holocaust, because the media was so mean to him for saying those wimpy Jews should have rushed the gunmen.

Ben Carson DID Say The Pyramids Were Designed To Store Grain

Yeah, that one he stands by. Thought you should know.