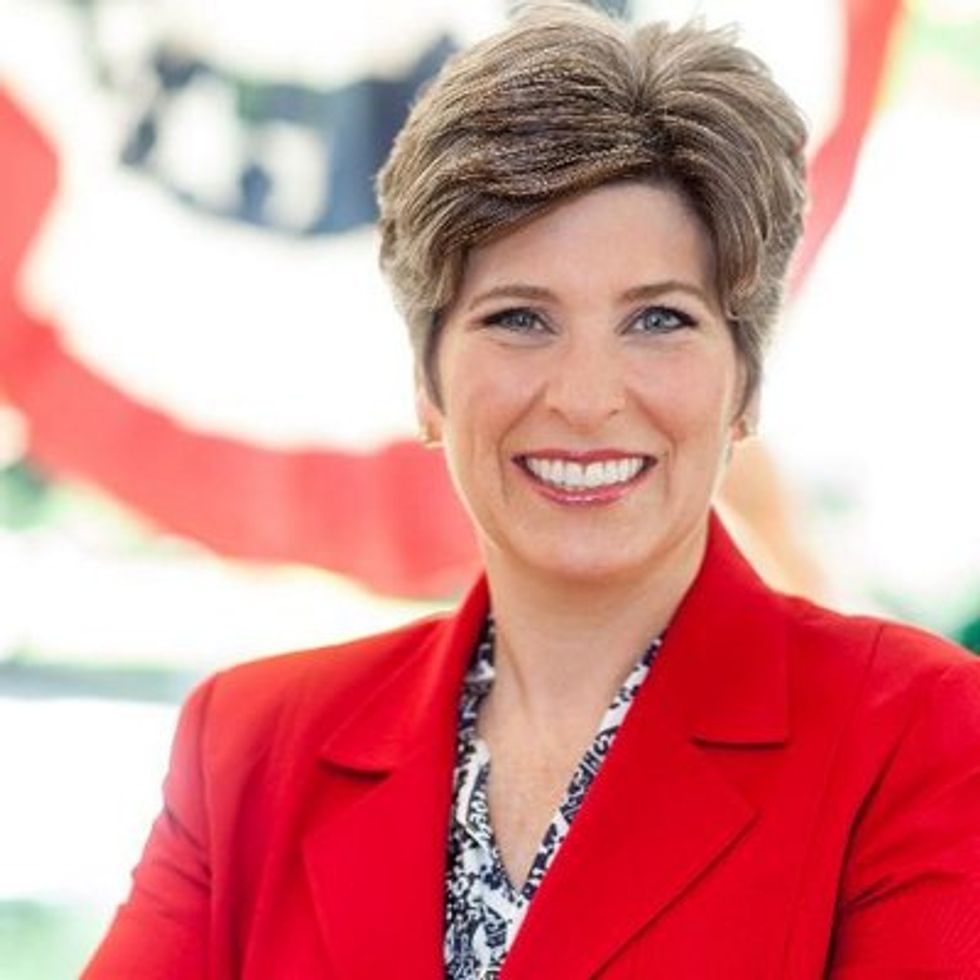 Barely a week into her congressional tenure, Sen. Joni Ernst (R-Iowa) has been tapped to deliver the GOP's rebuttal to President Obama's State of the Union address next week.

Huzzah! But before you get too giddy about the potential rhetorical tire fire based only on all the wacky shit Ernst said during her 2014 Senate campaign, please make sure the “PC Police” (are we using this term correctly?) at the Washington Examiner sanction anything you might have to say about Ernst's previous "views" on "the issues."

It’s no secret that conservative women are held to a different standard than liberal women. That bias becomes most obvious when a conservative woman rises to a prominent position.

In any event, it’s not a secret anymore, thanks to columnist Ashe Schow who, besides being an anagram for "Whoa Chess," is on the case.

Shortly after it was announced that Sen. Joni Ernst, R-Iowa, would deliver the GOP response to Tuesday's State of the Union address, pro-abortion group EMILY’s List sent out a press release calling Ernst “window dressing,” essentially because she doesn’t espouse liberal dogma. Essentially, because Ernst doesn’t agree with the Left on how to help women succeed (and roughly half of all women don't), she’s anti-woman. Because in their eyes, you’re either for liberal policies or you’re for the problem.

Exactly. EMILY's List had the gall to call out a GOP Agenda that disproportionately harms women and then demonstrates its conserva-sexism with the scathing “window dressing” comment about a woman who merely supports a closely held corporate person's right to make up any bullshit belief to avoid obeying a law because of course that makes sense to them. Who does EMILY's List think they are, a PAC that supports pro-choice, pro-family planning Democrats in direct opposition to the Ernst/GOP platform?

To Ernst’s credit, she's above it all. Words are just things people say. And proposed "personhood" amendments are just a collection of words that become binding law. There’s no need for this below-the-belt labeling. Ernst doesn't even believe there are issues unique to women, so leave her out of this. (However, if "women's issues" do exist, Ernst is the right man for the job because she's in fact, a woman.) And since EMILY's List doesn't agree with the GOP's view of the female uterus as community chattel, they get to be called "pro abortion" by Whoa Chess because you're either with the persecuted conservative women or you're an abortion fiend.

EMILY’s List wasn’t the only group to insult Ernst. In an article about her selection as the response-giver, Politico chose a less-than-flattering photo of Ernst. Mollie Hemingway of the Federalist likened the photo selection to that of Newsweek’s 2011 cover photo of former Rep. Michelle Bachman, which depicted the then-presidential candidate as having “crazy eyes.”

The appearance of “Crazy eyes,” or in Michele Bachmann’s words, “my actual eyes,” is a well-known example of liberal media bias. And I can’t think of any media outlets popular with conservatives or *gasp* the unenlightened non-conservative masses that have criticized the appearance or run unflattering pictures of Hillary Clinton. Or Nancy Pelosi. Or Michelle Obama. Or Michelle Obama’s Daughters. Or Hillary Clinton’s Daughter. Or Pretty Much Any Woman Tangentially Connected To A Democrat. Even The Ridiculously Fine Beyonce. And definitely not THE Politico like 15 days ago.

Then there was Luke Russert, whose condescension regarding Ernst's choice would be unimaginable had he been discussing a liberal woman.

I sympathize with Ashe Schow as we're all for Luke Russert STFU'ing at Yr Wonkette.  However, we're not quite sure the young man has the awareness to shoehorn condescension into another vapid tweet. Now if he would've said, "This time last year she was an unknown, prattling on about the imminent invasion of jackbooted U.N. thugs, on Tues she will deliver the GOP SOTU response (if she's not interned in a FEMA Camp first)" he still wouldn't be wrong. But I can see how that could be construed as condescending.

And all this is beside the point anyway. When did rough tough conservatives become such hothouse flowers disingenuously whining about media bias? (How old is media dude?) But it’s not cool to talk about Joni Ernst’s pig farming. It WAS cool when SHE talked about it in order to get votes from hayseed Iowans. But now that she’s a big time senator, it just seems uncouth to bring it up because while coastal elites are bad, some conservatives are also thin-skinned coastal elites too, and pig farming makes them uncomfortable. Or something. Ernst ran entire campaign commercials revolving around removal of pig testicles, but Luke Russert can't even post a stupid tweet about a politician with a unique profession? "Jimmy Carter was a peanut farmer." Shut your mouth and show some respect! Ok bring it home, Whoa Chess.

But the real sexism in Russert’s comment was in the omission of Ernst’s military career, something he probably wouldn’t do when tweeting about a male Congressman (especially a liberal one).

Well I'm lost, but this is a new year. In the interest of finding common ground with those who differ from us, let's give Luke something to work with this evening. Go to the well one more time: "This time last year she was an unknown veteran somehow still claiming Iraq had WMDs, tonight she will deliver GOP SOTU response." There. Is everyone happy? No one is going to be happy.

So let's skip to the part where we try to predict Ernst's rebuttal before the president even gives his State of the Union address. Feel free lend your degenerate genetic makeup to another vice, gambling. Below are the odds for Joni Ernst’s SOTU Response. Contact your bookie.