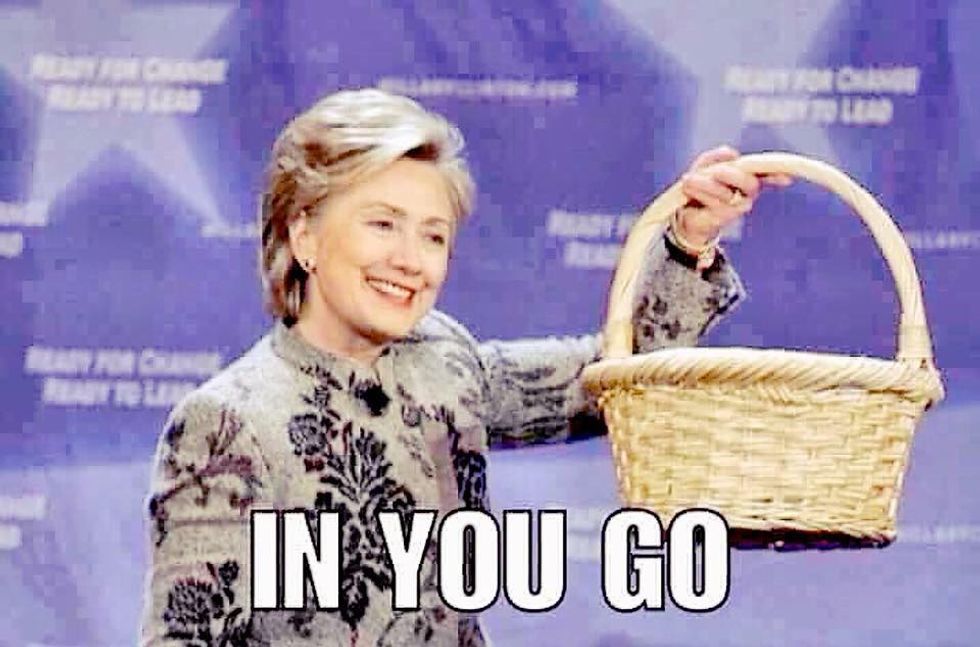 oh wait she did

We know, we know, we know. Hillary Clinton is a terrible rage harpy who should abandon public life forever and probably stop showing her lady face anywhere outside her house, because she ran such a BAD CAMPAIGN and offered NO VISION for solving Regular (White People's) Problems, despite how she talked about those things constantly and her website was full of solutions and plans to make all Americans' lives better, even the lives of the literal tens of thousands of white people in the Rust Belt who, with the help of Russia, propelled Donald Trump to the most historic negative three million popular vote U.S. American presidential victory in all of world history.

MAYBE if she had talked about those things in her 33,000 missing EMAILS, you know? Ever think about that, Hillghazi???? And MAYBE if she hadn't run around hurting Real America's feelings all the time by saying lots of Trump supporters belonged in something called the Basket Of Deplorables -- such a divisive asshole, that Hillary! -- then we wouldn't be sitting here witnessing the aftermath of an actual act of detestable terrorism committed by actual Nazis.

Oh wait, sorry, what we meant to say is that maybe if fuckers had LISTENED TO HER when she committed the crime of saying something very true about how Donald Trump was enabling, encouraging and emboldening a certain group of racist neo-Nazi white supremacist Fuckhead-Americans, and maybe if folks on MANY SIDES had pulled their thumbs out of their assholes and voted for the only fucking qualified AND VIABLE opponent to Trump and everything he represents, we wouldn't have the actual Basket of Deplorables partying its way through the streets of Charlottesville like it's Germany, 1936.

Shall we revisit that famous speech? Take it away, Hillz!

“I know there are only 60 days left to make our case — and don’t get complacent, don’t see the latest outrageous, offensive, inappropriate comment and think, well, he’s done this time. We are living in a volatile political environment. You know, to just be grossly generalistic, you could put half of Trump’s supporters into what I call the basket of deplorables. Right? The racist, sexist, homophobic, xenophobic, Islamophobic — you name it. And unfortunately there are people like that. And he has lifted them up. He has given voice to their websites that used to only have 11,000 people — now 11 million. He tweets and retweets their offensive hateful mean-spirited rhetoric. Now, some of those folks — they are irredeemable, but thankfully they are not America.”

“But the other basket — and I know this because I see friends from all over America here — I see friends from Florida and Georgia and South Carolina and Texas — as well as, you know, New York and California — but that other basket of people are people who feel that the government has let them down, the economy has let them down, nobody cares about them, nobody worries about what happens to their lives and their futures, and they’re just desperate for change. It doesn’t really even matter where it comes from. They don’t buy everything he says, but he seems to hold out some hope that their lives will be different. They won’t wake up and see their jobs disappear, lose a kid to heroin, feel like they’re in a dead-end. Those are people we have to understand and empathize with as well.”

Of course, even at the time, the media and the GOP didn't seize on how the entire second half of her statement was about empathizing and working for better lives for those Trump supporters who aren't scum-of-the-earth Nazi dumpster fire piece of shit gonna-go-STRAIGHT-TO-HELL-when-they-die motherfuckers like these ...

Hillary Clinton ended up having to apologize for that speech, because Hillary Clinton ends up having to apologize for everything. Even though literally every single thing she said there was true, just like it was true when she gave that entire speech how the "alt-right" and white nationalists are just the same old fucking racist bigot Nazis we've always had, just with more media-friendly code names, and then she told the story about Donald Trump's OWN vast racist history.

Would you enjoy watching that speech again while you tear your hair out and cry for America, or will that just make you too sad?

Wonkette apologizes for bringing up Hillary Clinton. Forget we said anything.

Also, she should probably smile more.

Wonkette salaries are fully paid by loving folks like you! If you love us (and want to keep us full of the alcohol we need to get through this) click below to pay those salaries!