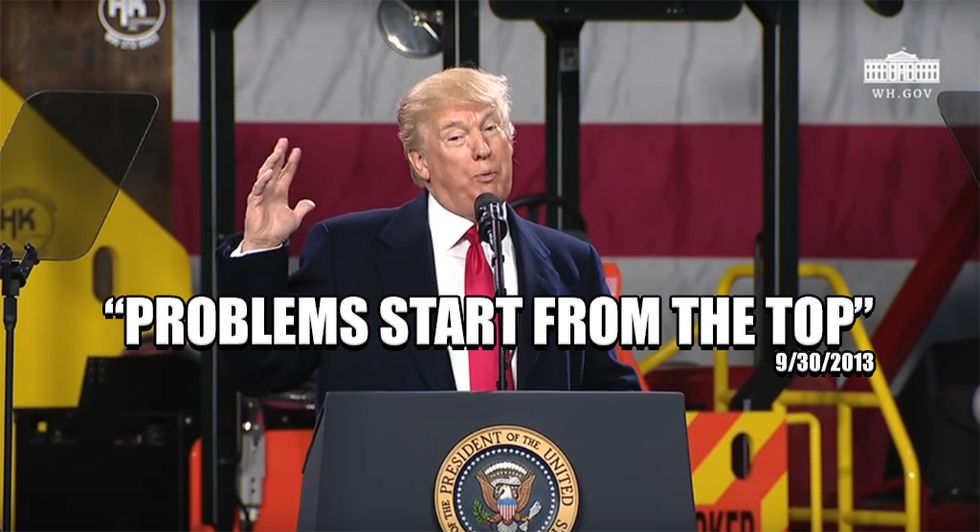 Morning Wonketariat! Here's some of the things wemay be talking about today, BUT FIRST tell Trump and the GOP that Yr Wonkette deserve a Fake News Award by taking THIS ACTUAL POLL! Remember to tell all 3,000,000 of your Mexican friends!

The House passed a joke of a funding bill last night, and as we approach the zero hour of yet ANOTHER government shutdown (again), Trump and the GOP are spreading thick layers of bullshit.

Senate Democrats are digging in for DACA, causing Mitch McConnell and Senate Republicans to openly gripe with reporters about the constant "charade."

During a private conversation with Trump, Chuck Schumer blasted Tom Cotton for fucking up Dick Durbin and Lindsey Graham's DACA proposal. Last night Schumer called out both Cotton and Rep. Bob Goodlatte on the Senate floor, stating, "There is no deal that Sen. Cotton or Rep. Goodlatte could forge that could earn the majority of either the House or the Senate... If Sen. Cotton and Rep. Goodlatte have veto power over an agreement, everyone knows there won't be an agreement."

The House Intel Committee released a transcript of its interview with Fusion GPS co-founder Glenn Simpson and it's a page turner! There's talk of money laundering with the NRA, Russian blackmail that doesn't involve pee hookers, and potential assassinations. Yes, Evan will be liveblogging this one! [Morning Maddow]

Here's a homework assignment that will richly inform your read-along of all Trump's money laundering funtimes! It's a brilliant investigation from a few months ago, by the Toronto Star, into how Trump's Toronto condo miserably failed for everyone but Trump, leaving him with millions while everyone else went broke, and all the Russian mobsters who helped him along the way.

Dame Peggington longs for the days of gentlemen, when a man would court a woman without ruining her mascara, and always took precautions when taking advantage of feeble-minded secretaries. [Archive]

Tucker Carlson brought on conservative talking head Mark Steyn to argue about how, "The white supremacists are American citizens. The illegal immigrants are people who shouldn’t be here."

Pennsylvania Republican Rep. Scott Perry went on Tucker to talk about how he "believes" in all the conspiracies "credible evidence" that points to ISIS being responsible for the mass shooting in Las Vegas.

NBC is denying allegations that Megyn Kelly's show is a hostile work environment after an angry writer for Kelly's show fired off a 4,000-word nastygram.

The LA Times Guild wants its publisher "You're Fired" after allegations that he was a frat bro man-child who hates being surrounded by fabulous gay dudes. Plus you should see the dudes of parent company "tronc" hollowing out the Times to pay for their buddies' wet bars.

Mick Mulvaney has written Fed chair Janet Yellen to say that he needs zero Ameros this year for the CFPB. Coincidentally, zero is the amount of effort being expended by the CFPB under Mulvaney.

Later today, Trump will speak at the March For Life despite being openly pro-choice. Maybe he's going to tell how to science babby away when Jesus doesn't answer your calls.

Just before the government shutdown, Trump will use taxpayer money to fly to Mar-a-Lago (AGAIN) so he can throw himself a fancy party for his first year in office. Tickets start at $100k.

South Carolina Republican Rep. Mark Sanford is pissed Ryan Zinke wants to let oil companies fuck up all his beaches, so he's going on TV in an effort to get Trump's attention.

Chicago Democrats have thrown Rep. Dan Lipinski to the wolves, BRUTALLY trashing him for bailing on progressive causes. He calls them "the Tea Party of the Left."

SCOTUS has stalled a lower court ruling for North Carolina to redraw its gerrymandered congressional districts before the 2018 elections, because it would be too hard for Republicans to draw up another rigged map.

Trump's pick to be the public face of AmeriCorps "You're Fired" himself after people found out he was an Islamophobic, gay hatin' sexist who thinks all black people are lazy welfare queens from ghettos, and that veterans with PTSD have "a weak mind." (We keep thinking we're unshockable, but these quotes did it.)

One year later, a number of Trump's top staffers still haven't got final approval on legally required financial disclosures, suggesting they're either refusing to cough up the details, or trying to hide how they're capitalizing from political positions.

Behind the scenes, White House staffers are scrambling to maintain their sanity, with many telling reporters that they're thinking about quitting rather than dealing with a childish, foul-mouthed racist.

Poor Chris Christie found that he now has to shuffle his ass in line like the rest of the proles when he was denied entry into the VIP entrance of Newark Airport.

British bookies are betting that Trump will be impeached, putting the odds, as of today, at 64%. Oi, those chaps are cheeky cunts!

If you're a country suffering under pesky sanctions, simply head out on the high-seas to get all the illegal goods and resources you need.

A new ProPublica investigation discovered that a conservative think tank has been funded by some of the wealthiest Republican donor families, including Koch, Mercer, Uihlein, and Illinois Republican Governor Bruce Rauner.

Here's some nice phototime of Pilsen, a historically Mexican neighborhood in Chicago, from Sebastian Hidalgo. Like many of the old working class ethnic enclaves in cities across the country, Pilsen is being rapidly gentrified while its residents deal with the fallout of DACA.

And here's your late night wrap-up! Stephen Colbert on how Republicans are holding children hostage; James Corden dressed up as Melon Trump and sang a Little Mermaid parody; Jimmy Kimmeltalked to kids about Trump;Seth Meyers took A Closer Look at the looming government shutdown; The Daily Show broke down how Trump is too stupid to understand immigration.

And here's your morning Nice Time! A RUSTY SPOTTED CAT!

We've got some big things on the horizon, but we need your help to get there! GIVE US MONEY to make it happen!