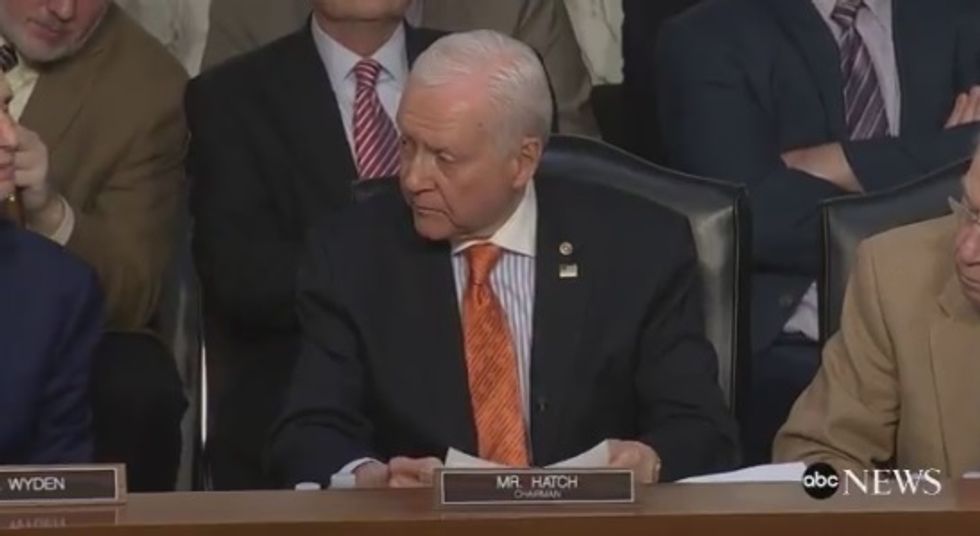 Sherrod Brown really takes the fight to Orrin Hatch here. No Trumpian namecalling or low blows. Instead focusing on the GOP helping only the ultra-rich. Judging by how mad Hatch got, Brown hit a soft spot. pic.twitter.com/WxDFb8ipHB

Senate Finance Committee chair Orrin Hatch (R-The good decent hardworking clean-living state of Utah) got pretty darn angry with Sen. Sherrod Brown (D-The lazy taking jealous-of-their-betters state of Ohio) yesterday during debate on the GOP tax bill, because even though the Republican plan is objectively loaded up with goodies for the rich (including a tax break for private jets!), Hatch has just had it with Democrats telling him that, because just like Steve Martin in The Jerk, Hatch was born a poor black child and then clawed his way to the top on his own merit. Go watch the video up top for Sherrod Brown being a meanie and Hatch being tetchy about how unfair all this class warfare is.

As Greg Sargent 'splains at the Washington Post, Brown's mention of an amendment being offered by Ron Wyden (D-hippy dippy pothead Oregon) is a big part of what set Hatch off:

That amendment would undo the tax cuts on corporations if wages don’t grow. The Senate bill would cut the corporate tax rate from 35 percent to 20 percent — permanently — and one of President Trump’s and the GOP’s chief stated rationales is that the move will unleash massive wage growth. The amendment called the GOP’s bluff for messaging purposes.

Brown pointed out that GOP's Forever Class War propaganda -- tax cuts for corporations will somehow make life wonderful for the middle class, through increased wages, eventually -- was a snow job, and merely a "good selling point" at best:

WELL! You do not just go around accusing Orrin Hatch, noble son of good decent people (who only has a net worth of $4.96 million, so he won't even have to pay the Estate Tax) of being out to help the wealthy, darn it, because this high-ranking, very powerful senator happens to know for a fact that he ain't no Fortunate Son:

I come from the poor people. And I’ve been here working my whole stinkin’ career for people who don’t have a chance. And I really resent anybody saying that I’m just doing this for the rich. Give me a break. I think you guys overplay that all the time, and it gets old. And frankly, you ought to quit it!

Brown tried to pop in by pointing out that tax cuts have been passed "over and over and over again" without creating the promised prosperity, but Hatch gaveled him down for being shirty and out of order, and probably for having too much five-o'clock shadow, the rumpled ruffian. Besides, Hatch is a goddamn gentleman, and a parliamentarian who has the good of the American People in mind when he pushes permanent tax cuts for corporations.

Now, I've honored you by allowing you to spout off here. And what you said was not right, that's all I'm saying! I come from the lower middle class, originally. We didn't have anything. So don't spew that stuff on me. I get a little tired of that crap. Let me just say something. If we worked together, we could pull this country out of every mess it's in. We could do a lot of the things that you are talking about, too. I think I've had a reputation for working together.

Oh? Working together? Brown jumped in, "Then let's start with CHIP..." Starting with CHIP would make sense; Hatch actually originally sponsored the children's health insurance program across the aisle with one Ted Kennedy (D-Taxachusetts and also Chappaquidick as you doubtless have been hearing A LOT this week). But no, Hatch did not want to start with CHIP. He wants to start with tax cuts for corporations and the wealthy. But everything Hatch has ever done has been "for the benefit of people in this country." Especially the rich ones, but his heart is in the right, place, doggone it!

I like you personally very much, but I'm telling you, this bullcrap that you guys throw out here really gets old after a while. And then to do it right at the end of this is just not right.

So there you go: Orrin Hatch was raised as a child of the lower middle class, and therefore it is impossible for him to be pushing legislation that primarily helps the rich. Even if it does. Now, if you impertinent Dems would stop pointing that out to him, maybe we could return to bipartisanship.

The tragic thing, of course, is that Orrin Hatch really does remember when Republicans and Democrats worked together. He and Kennedy really did make CHIP happen, and he and Ron Wyden really did co-sponsor a bill to reauthorize it earlier in the session. But he's not about to acknowledge that it was derailed by his own party, which was far too intent on killing off Obamacare -- and health insurance for millions -- to bother taking up reauthorization of health insurance for poor kids. And he's too goddamn dishonest to admit that the new Senate tax cut bill will also wreck health care for millions. And yes, prioritize the rich over everyone else.

Just stop telling him he's no longer the poor boy he used to be, OK? Then maybe we can get some work done.