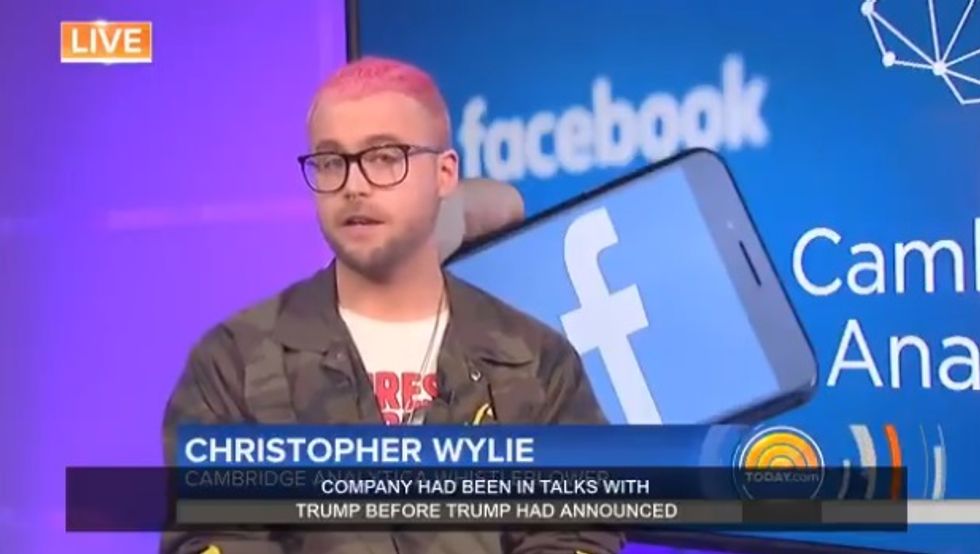 If you are a common non-math nerd, you might be tempted to click "close tab" when stories get into the weeds about the Trump campaign data operation, and how it worked (maybe with Russia!) to steal the election for President Orange Lumps. Don't do that this time, we promise we will make this interesting!

To briefly recap, Cambridge Analytica is the weird data firm based in the UK, funded liberally by the uber-wingnut mega-gazillionaire Mercer family, which worked with the Trump campaign to use Facebook to convince Nanas and little brothers all across America that Hillary Clinton was the devil incarnate. Steve Bannon was on its board! CA also notably reached out to Russian intelligence front WikiLeaks during the campaign, just to offer some help in filing and categorizing all the dirty Russian-hacked Hillary Clinton emails. We have always, since the very beginning, suspected that CA was an important player in the hacked email operation, perhaps maybe using stolen voter data from Russia's Alfa Bank, laundered through the DeVos family's Spectrum Health and the Trump organization, to do illegal internet hokey pokey to influence your dumb Nana's vote. And Nana's husband's vote. And all her mah jongg group. And don't forget your little brother.

Well! We don't know whether our conspiracy theory is true (bet Robert Mueller does), but shit is finally hitting the fan on Cambridge Analytica, thank baby Jesus. It started Friday night, while we were distracted by Andrew McCabe and Stormy Daniels, when Facebook unceremoniously put CA in Facebook jail for misusing user data. How many people? Oh, just like 50 MILLION AMERICANS, which is about a quarter of American Facebook users. But why now, though? Why so suddenly? Did Facebook just come to this conclusion all by itself, or was this more of a "there is a whistleblower named Christopher Wylie who is about to fuck all our shit up" situation?

Christopher Wylie, who helped found Cambridge and worked there until late 2014, said of its leaders: “Rules don’t matter for them. For them, this is a war, and it’s all fair.”

“They want to fight a culture war in America,” he added. “Cambridge Analytica was supposed to be the arsenal of weapons to fight that culture war.”

TOTALLY NORMAL! (Wylie, by the way, has also been banned from Facebook, because both sides do it or something.)

The short version on how this worked was that CA got data on 270,000 Facebook users from a third party app developer, a Russian-American with Kremlin ties (of course) named Aleksandr Kogan (also now banned from FB, but he has since changed his name back to Kogan from "Dr. Spectre," and no, that also is NOT A JOKE). Kogan nee Spectre is an "academic researcher" who made one of those doohickeys that is like "Answer these fifteen questions and we will tell you which Taylor Swift song you are!" kinds of things. Taking that data from the 270,000 users who clicked "Yes, this random app can pay me for my whole profile and also my credit card numbers if they want that!" and taking advantage of the fact that impressionable voters also don't tend to have very good privacy settings, CA was able to harvest data on all those users' friends as well -- approximately 50,000,000 people, whose information the company has of course not gotten rid of, despite protests to the contrary. They reportedly have GIGABYTES of the shit.

(And we still don't know if Russia laundered any other stolen voter data through Trump campaign intermediaries all the way over to CA, but it's worth noting the campaign paid CA almost six million buckaroos for its work. We should also note that, according to Wylie, CA has psychological profiles of 230 million Americans.)

Taking this information, the company -- which hired a few Americans, but was mostly made up of European Canadian British people, so hi there, foreign interference! -- could then target those people with lies, damn lies, and fake news. Remember that only 270,000 of these people actually agreed to have their information shared, but that even they didn't agree to have it sold to Cambridge Analytica and used to weaponize them in the election.

The purpose of all this?

Mr. Mercer [...] believed a sophisticated data company could make him a kingmaker in Republican politics [...]. Mr. Bannon was intrigued by the possibility of using personality profiling to shift America’s culture and rewire its politics[.]

Cambridge Analytica is particularly in trouble right now because it appears its CEO Alexander Nix and other CA executives have lied their lying dicks off about the data they have, how they harvest it, and what they've used it for, in many hearings of America Congress and also England Congress, which is called "Parliament." Facebook is also in big effing trouble with lawmakers in America and Britain for being so lax with its data, and is of course doing the "Who me?" song and dance it always does every single time questions like these come up about the 2016 election. Oh, also, Facebook threatened to sue the Observer/Guardian to keep them from publishing their bombshell story on Cambridge Analytica, so that's cool.

Please click all our links if you want to go down the very interesting rabbit hole of Cambridge Analytica's role in fucking the 2016 American elections in the ass. We will leave you with these two tidbits, to whet your whistle:

That time in 2014 Cambridge Analytica prepared a report for the second largest oil company in Russia, Lukoil, about the upcoming American primary elections.

In an email dated 17 July 2014, about the US presidential primaries, Nix wrote to Wylie: “We have been asked to write a memo to Lukoil (the Russian oil and gas company) to explain to them how our services are going to apply to the petroleum business. Nix said that “they understand behavioural microtargeting in the context of elections” but that they were “failing to make the connection between voters and their consumers”. The work, he said, would be “shared with the CEO of the business”, a former Soviet oil minister and associate of Putin, Vagit Alekperov.

“It didn’t make any sense to me,” says Wylie. “I didn’t understand either the email or the pitch presentation we did. Why would a Russian oil company want to target information on American voters?”

OH HUH. Wonder if the Russians weren't actually trying to understand micro-targeting, but instead wanted that data for other reasons. OH HUH.

That time when Alexander Nix and Christopher Wylie, who is a gay, went to New York City to meet Rebekah Mercer, the wingnut dark empress of hell.

“The gays. She loved the gays. So did Steve [Bannon]. He saw us as early adopters. He figured, if you can get the gays on board, everyone else will follow. It’s why he was so into the whole Milo [Yiannopoulos] thing.”

But think about it, because it makes all the sense in the world. All good ad people know that in the US, style trends in America follow similar paths, and one of them is from homo to hetero. We thought it was hilariously pathetic, watching the Trump campaign desperately trying to court the gays, throwing parties for the gays at the Republican National Goddamn Convention, and so forth. Turns out it was part of a marketing plan! A really dumb marketing plan, but it was a plan!

Anyway, consider your whistle whetted! If you need more, here is an interview with Christopher Wylie from Monday morning's "Today" show:

Oh by the way, Facebook's stock prices are tanking right now. Wonder why!

UPDATE:New Cambridge Analytica report is here, and it is a DOOZY!