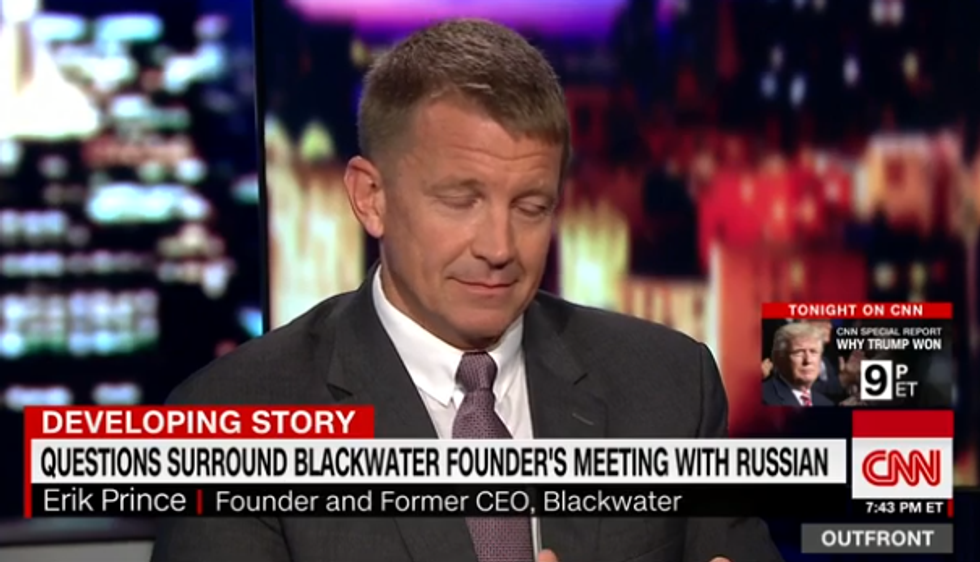 Way back in January, Erik Prince, the baby-faced Blackwater sadist who probably used to play Smear The Queer with Education Secretary Betsy DeVos, because of how they are sisters, went to the Seychelles as an "unofficial" representative of the Trump transition, for a meeting brokered by an Emirati sheik. The ostensible purpose? To set up some kind of weird back channel between Trump and Russia, somehow related to foreign policy in the Middle East.

(And yes, lifting American sanctions on Russia was mentioned in the original reporting on the meeting BECAUSE IT FUCKING ALWAYS IS. Michael Flynn's reacharounds with the Russians during the transition? Sanctions. Trump Junior's meeting with one million Russians? Sanctions. What do all the Russians Jared Kushner met with have in common? They are all under sanctions. Quid, meet quo.)

Up to now, we didn't know the identity of the Russian representative at that meeting, only that he was "close to Putin." The Intercept (we know! It's like they're distracting Glenn Greenwald with a laser pointer or something!) now provides us with with that man's name:

... [O]n January 11, a Turkish-owned Bombardier Global 5000 charter plane flew Kirill Dmitriev, CEO of the Russian Direct Investment Fund, to the Seychelles, flight records obtained by The Intercept show. Dmitriev’s plane was an unscheduled charter flight and flew to the island with two other Russian individuals, both women. The RDIF is a $10 billion sovereign wealth fund created by the Russian government in 2011.

As The Intercept reports, Prince has said it was just bid'ness, which is weird, since Kirill Dmitriev and the RDIF are under ... SANCTIONS. That means they probably shouldn't be doing bid'ness, right?

The Intercept also reminds us of this August CNN interview, where Prince said he can't remember anything about meeting his Russian pal, besides how he was a "fund manager" and the meeting lasted "as long as one beer":

Erik Prince tells me he met with a Russian "fund manager" over "one beer" in Seychelles. https://t.co/N05WD5rtT3

See? No big deal! And if they had sex afterward, that is literally not your business.

In that interview, CNN's Erin Burnett reminded Prince that in December 2016, the month before, he had met with the Trump transition, and that Jared Kushner, Michael Flynn and Steve Bannon had met that month at Trump Tower with Sheik Muhammed bin Zayed, the crown prince of Abu Dhabi, the Emirati who set up the Seychelles meeting. Prince met with the sheik that month too.

And then came the big Seychelles meeting in January! "I know the Emiratis delivered the Russian to the meeting," said Erin Burnett in August, clearly exasperated to even be dealing with this pretty boy Jesus freak with his lying lips.

At the time of the OBVIOUS NOTHINGBURGER Seychelles meeting, the island nation's secretary of foreign affairs noted gleefully that his country was perfect for clandestine meetings like this, so keep that #TourismTip in your back pocket if you are an international man of mystery.

Let's learn more about the RDIF, the fund run by Dmitriev, the Russian Erik Prince had ONE BEER with, and whose name he does not recall:

Dmitriev’s fund, which is closely connected to the Kremlin, has come under scrutiny this year from members of Congress because of its interactions with Anthony Scaramucci, who was briefly tapped to be Trump’s communications director, in Davos just days after the Seychelles meetings. [...]

As one of Russia’s official sovereign wealth funds, RDIF is closely tied to the government and has the ability to funnel public money into private projects. When President Barack Obama implemented sanctions in 2014, he wanted to make it difficult for Russia to obtain operating capital and tried to slow the country’s overall economic growth. RDIF was an important target, compliance lawyers say.

RDIF is also a political entity, said Chris Weafer, a senior partner at Macro Advisory, an investment advisory firm in Moscow. When the government puts forward an economic project, RDIF helps execute it.

Weafer went on to call the RDIF the "investment consigliere" of the Kremlin.

Want to know who owns the RDIF? Oh, just VneshEconomBank (VEB), one of the (sanctioned!) state-owned Russian banks so near and dear to Vladimir Putin's heart. Jared Kushner met with Sergei Gorkov, the head of VEB and a trained Russian spy, in December 2016, because the Russian ambassador told him to. Michael Flynn also met with the Russian ambassador that month and assured him the sanctions would probably Seacrest Out the second Trump was inaugurated. How many innocent coincidences are we dealing with here? (Also, can we note Michael Flynn was fuckin' BUSY that month? Hatching plans to kidnap Turkish clerics, doing weird Russian conspiracies ... we bet he needed a DIVA NAP after all that!)

This is a literal metric fuckton of Russian meetings to keep up with, all of which happened during the Trump transition. Lucky for you, Marcy Wheeler (who has been amazing at analyzing this Russian shit and you should be reading her) made us a handy timeline:

Later December: At the behest of Kislyak, Kushner meets with Vnesheconombank’s Sergey Gorkov

Nothing to see here, nothing at all, don't you worry your pretty little head about any of this. Just go take a #MAGA shit and enjoy the rest of your day, OK?

Wonkette salaries and servers are fully paid for by YOU. If you love us, click here to fund us!