Should Trump Do An Interview With Robert Mueller? Yes Or OMG LOL HELL YES? 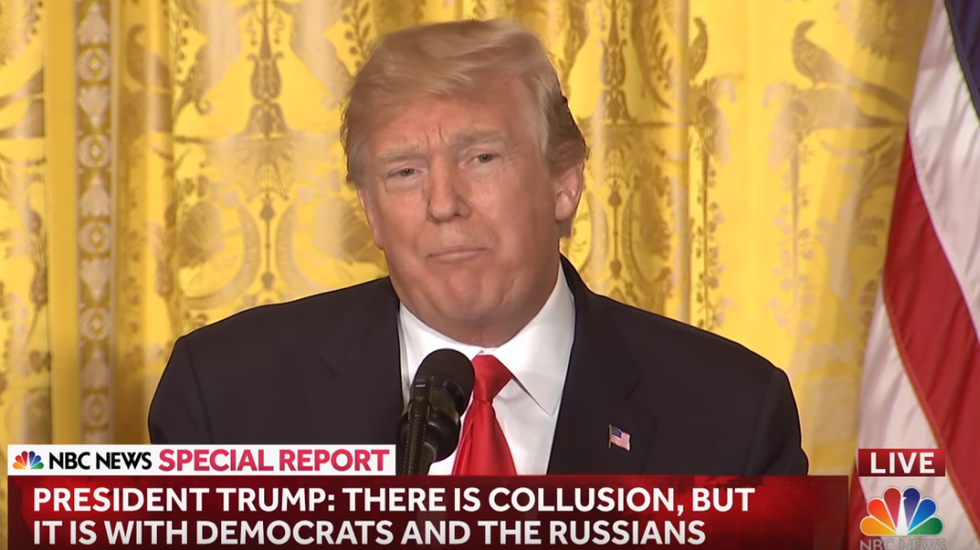 The other day Wonkette wrote about about how Donald Trump's VERY GOOD LAWYERS are desperately seeking alternatives to having Trump sit down for a raging perjury session with special counsel Robert Mueller. Their favorite alternative is "NOT sitting down for a raging perjury session with Mueller." They're thinking, "Maybe if he fills out a questionnaire for Mueller! What about if he colors a coloring book for Mueller? Would that work???"

Long ago, Trump said he was willing to sit with Mueller, because obviously he is bigly innocent, so why not? But Wednesday, in a presser with the Norwegian prime minister, Trump changed his tune. Want some Trumpian word salad that may or may not be in English? Sure you do! The question he's answering is "are you willing to meet with Robert Mueller"?

Well again, John, there has been no collusion between the Trump campaign and Russians, or Trump and Russians, no collusion. When I watch you interviewing all the people leaving their committees, I mean the Democrats are all running for office, and they're trying to say this that, but bottom line they all say there's no collusion.

And there is no collusion! And when you talk about interviews, uh, Hillary Clinton had an interview where she wasn't sworn in, she wasn't given the oath, they didn't take notes, they didn't record. And it was done on the 4th of July weekend. That's, perhaps, ridiculous, and a lot of people looked upon that as being a very serious breach, and it really was.

It was the 4th of July! They didn't even interview her! They all just shot off fireworks together and laughed about how the FBI and Hillary Clinton are #RIGGED for each other. God, Trump is so full of shit. For the record, Trump "beat" Hillary Clinton 429 days ago, and his one-trick brain is still fixated. Sad!

But again, I'll speak to attorneys. I can only say this, there was absolutely no collusion, everybody knows it, every committee, I've been in office now for 11 months. For 11 months, they've had this phony cloud over this administration, over our government, and it has hurt our government, it does hurt our government, it's a Democrat hoax that was brought up as an excuse for losing an election that frankly the Democrats should have won because they have such a tremendous advantage in the Electoral College, so it was brought up for that reason. But it has been determined that there is no collusion and, by virtually everybody, so we'll see what happens.

WAIT WHAT WAS THE QUESTION? Oh that's right, will you meet with Robert Mueller was the question. Try to make your stupidhole answer the question this time, Donald?

Golly, Michael Wolff's book about how MAYBE the president is somewhere on the dementia spectrum sure was dumb, wasn't it?

First of all, Trump's repeated claim that there is "NO COLLUSION" suggests to "virtually everybody" that there was a LOT of collusion, considering how Trump is lying hardest when he's repeating himself the mostest.

But the thing is, Mueller has questions about ANY NUMBER OF THINGS! He could ask Trump about collusion and/or money laundering and/or obstruction of justice, and then after that he could ask about obstruction of justice about 50 more times, because it's REALLY CLEAR Trump committed obstruction of justice in firing James Comey and in crafting the bullshit excuse letter about Dumbass Don Jr. meeting with a bunch of Russians in Trump Tower in June 2016. (Oh, and did we mention Mueller just hired a CYBER SEXXXPERT lawyer for his team? Wonder if Mueller has questions about the Trump data operation and whether it was connected with Russia and the hackers!)

Maybe Trump's dumb lawyers are telling their dumb client he probably won't have to do an interview, so that's why Trump answered like that. We predicted when news about a possible interview broke that the LAST thing his lawyers would want is for President Mouth Farts to sit with an actual prosecutor of Mueller's caliber.

For the record, they say it's still up in the air:

Bradley Moss has a (perhaps unintentionally) hilarious piece in Politico about what it would look like if Trump's lawyers attempted to prepare him for such an interview. Trump's a liar, he doesn't do details, he has a bad brain, it would "irritate and confuse" him if you tried to prepare him with documents, as if he was a smart person like Hillary Clinton. He'd have to sit through mock interviews, which would bore him and cut into his executive time.

Also, the president is REALLY BAD AT TALKING (see above):

Trump ... has a habit of engaging in repetitive but incoherent rants. These are client traits that form the basis for lawyers’ nightmares ... If the president stumbles and gets sidetracked, history has shown us that he will start delving into tangential issues. A veteran prosecutor like Mueller will let the president go down that rabbit hole every time, if only to see if that is where additional information lies that could flesh out the entirety of the story.

Moss concludes that if Trump were actually prepared, he could do fine, but if he isn't -- and he would never be, not in a million years -- he will probably shoot his dick off, pick it up off the floor and eat it, and admit to so many crimes he'll end up "in a world of political hurt from which there may be no rescue but impeachment."

So, in that spirit, Wonkette encourages Robert Mueller to stay strong and GET YOU A TRUMP INTERVIEW!