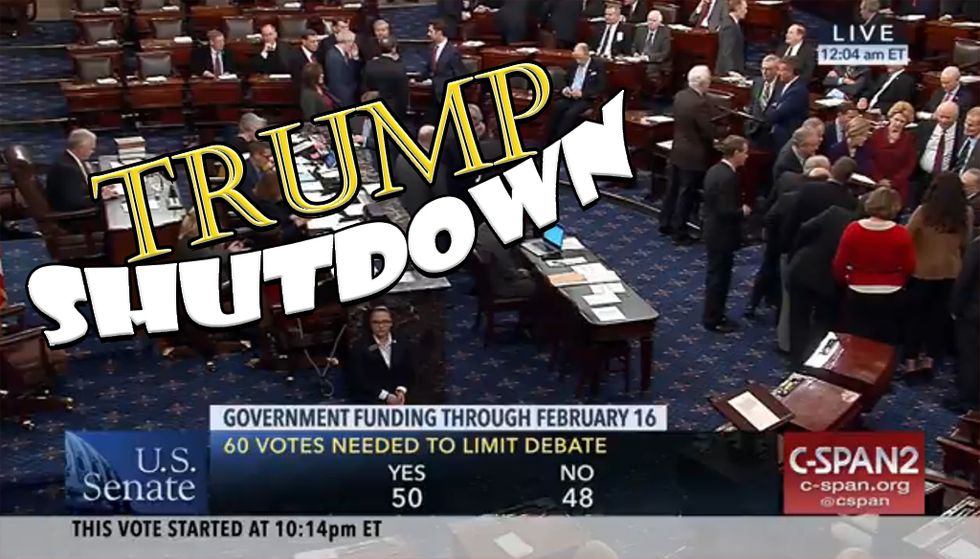 Congress failed to reach an agreement to continue funding the federal government last night, triggering a government shutdown. This morning, members of both the House and Senate are gathering on the Hill to hash out a temporary spending agreement. The whole spectacle made for some great television -- C-SPAN's ratings must be off the charts..

Last night's finale of the #TrumpShutdown was one of those "Will they or won't they" moments so common in reality TV. For hours Republicans and Democrats quibbled over paying Uncle Sam's bills -- Republicans holding poor sick children hostage as Democrats refused to vote Mexicans off the island. All the while an unusually quiet Donald Trump loomed over the whole the process like the proverbial 239lb elephant in the room.

Cable news talking heads attempted to provide a play-by-play for people standing around and talking on the Senate floor. Shortly after 10:00pm, voting began

and it became pretty obvious that the vote would fail, setting off a flurry of huddles and scrums that were as riveting as waiting for a constipated dog to finally crap. Highlights of the evening included games like, 'Is Orrin Hatch Sleeping Or Just Resting His Eyes,' and watching Tammy Duckworth's badass aide hustle the Senator up and down carpeted stairs...in heels.

After sneaking off to the Senate cloakroom with Mitch McConnell, Chuck Schumer held court with Democrats while Lindsey Graham and Jeff Flake roamed around enemy territory. As the clock ticked closer to midnight, McConnell help up the final vote as negotiations continued, but with nothing to interpret other than body language, everyone on Twitter suddenly became experts in kinesics.

Shortly before midnight, Sarah Huckabee Sanders pressed her pootlips and tweeted out a statement from the White House blaming Democrats for the Republican majority's inability to perform the most basic function of government, calling Democrats "obstructionist losers" for giving a shit about about immigrants.

Much Presidential. So lead. Bigly wow.

As the clock struck midnight and McConnell finally voted, and reiterated much of that sentiment in a fussy speech where he railed against Democrats for double-daring them into a physical challenge. Schumer calmly countered that assertion, noting that he'd spent the day considering the unthinkable, but Trump and hardline conservatives decided play around in a shithole instead of acting like adults.

"What happened to the President Trump who asked us to come up with a deal, and promised that he'd take heat for it? ... He backed off at the first sign of pressure."

As the companion series to The White House Apprentice, Legislative Liaisons has been plagued by an overly dramatic cast from the start. Republican frat-bros and lying olds have been picking unnecessary fights just to make their fans happy, but they've gotten so out of control that it's become a cartoonish big ball of violence, fists and feet flying form the cloud as it floats around the Hill consuming everyone in its path. They expected to beat everyone into submission, but after years of being called spineless nerds, Democrats finally stood up for themselves.

Now, on the one year anniversary of Trump's ascendance to the throne, he's quietly bitching about missing his own party in Mar-a-Lago that's been raging since Thursday. This morning, Congressional leaders are attempting to kick the can down the road so that they don't poo all over Trump's party, and make him deliver a State of the Union address in the dark.

With people gathering in cities across the world to protest Trump's presidency and call for women's rights, it's nice to know that Trump still thinks everything is about about him. And ratings.