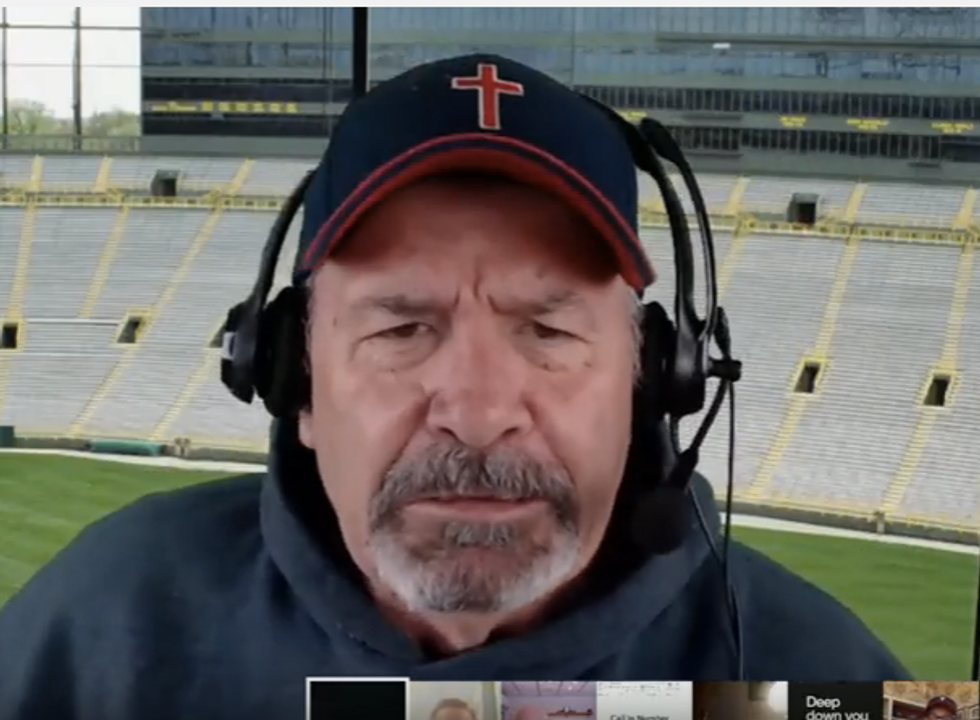 If there is one thing "Coach" Dave Daubenmire does not want -- other than trans people peeing in Target bathrooms -- it is Rachel Maddow giving him advice. He explained this on his YouTube broadcast on Thursday, in front of a green screen showing a football stadium.

As you may know, at one time he was indeed a high school football coach, but was dismissed from that job following an ACLU lawsuit over the fact that he forced his team to pray with him before games. Now he just pretends. With green screens. And probably little plastic soldier men.

Now, the reason Daubenmire will not be taking advice from Rachel Maddow, he explains, is because he is so much smarter than her. He knows this, because she is not even smart enough to know she is supposed to love MEN, not women! Silly, silly Rachel Maddow!

Woah, he has really got her there! Clearly, the only reason people are gay is because no one ever done told them they were supposed to be loving people of the opposite sex. They just don't know! They are not smart like how Coach Dave Daubenmire is smart! He knows how plumbing works, and also that you are supposed to do sex the same way you do plumbing -- with plungers and Drano. As the good lord intended.

I made a concerted effort to figure out what, exactly, Daubenmire thought Rachel Maddow was giving him advice about. Was she doing this through MSNBC, or through his neighbor's dog?

I listened to like three minutes of him ranting prior to making that statement, trying to figure this out, and all I got was some nonsense about how he buys his reading glasses at the Dollar Store and how even though there are people watching this who think he is just a dumb cow poke and not smart (and high school students who think he is a bullfrog?), he is too smart and so was his Dad! And all of us are dumb! And also some random Eagles lyrics. That sounds like a joke, but he did, in fact, quote Hotel California. Because, much like said Hotel California, everyone who is not hep to what Dave Daubenmire is throwing down is just "programmed to receive." Which is just the kind of profound statement I feel like one does not hear much outside of the dorm rooms of stoners?

What any of that has to do with Rachel Maddow, I haven't the slightest. Maybe he is mad because he thinks that Rachel Maddow thinks she is smarter than he is when really, her mind is Tiffany-twisted and she's got the Mercedes Benz? And also a lot of pretty, pretty boys that she calls friends, you know, because she's a lesbian and therefore not dating any of them? It is a mystery!

(Full disclosure: I did once a cover of Hotel California for a play. LAUGH IT UP, WONKERS.)

He later went on to yell a bunch about trans people in bathrooms, because that's kind of his whole schtick, because he is definitely not stupid or a bullfrog or a cowpoke or any of those other things. He is just a jackass.