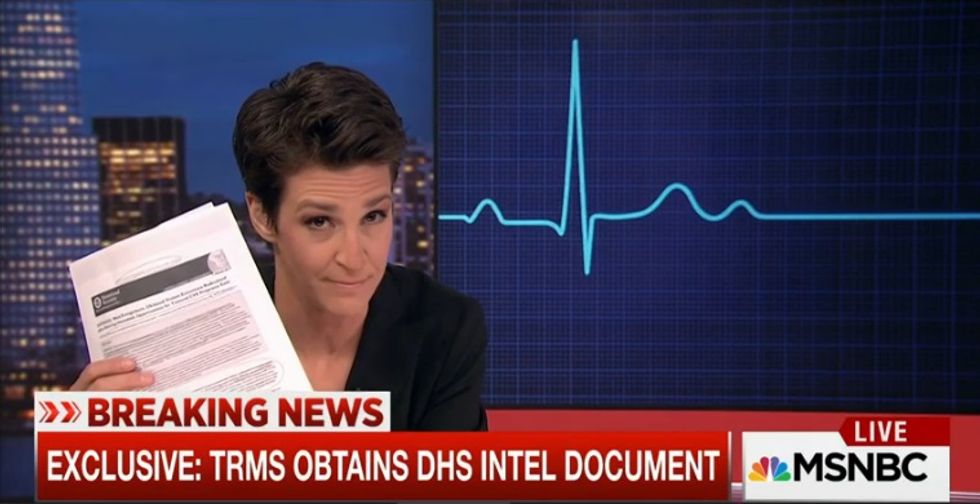 The joke around the Wonkette Sekrit Chatcave has been that we need to be ready to write up whatever latest Trump idiocy the Washington Post or New York Times publishes in the evening, usually while we're watching Rachel Maddow (a certified Friend of Wonkette who has acknowledged we are The Best). Thursday evening, the Maddow Show went one better, actually breaking a big story thanks to a leak from someone in government who handed MSNBC a study from the Department of Homeland Security's Office of Intelligence and Analysis (I&A) indicating the rationale for the Trump Administration's travel ban is, as Maddow put it, bullpucky. The Trumpers insist we need to ban travel from seven Muslim-majority countries for three months while we figure out some "extreme vetting" measures that'll ensure no terrorists or potential terrorists will enter the country. The leaked DHS report pretty much blows that rationale out of the water, Maddow says, since it found over half of the foreign-born people who became terrorists after entering the USA actually became radicalized years after arriving here -- making any vetting that depends on asking immigrants how much they love America largely useless. Here's the segment from Thursday's Maddow Show:

Maddow acknowledges she's no Woodstein and Bernward -- her show didn't get the document by doing any investigative work; it was dropped into their laps by a source who wanted this to get publicized. (We deeply appreciate how Trump's terrible policies have led government agencies to become leakier than a refugee raft.) And the document is a doozy; the I&A analysis is unclassified but marked "For Official Use Only," with a disclaimer indicating it shouldn't be made public. The analysis is based on publicly available information from academic and government sources, and covers people who were "indicted or killed" between the start of the Syrian civil war and December 2016. Notably, the report was coordinated with other government agencies, including Customs and Border Patrol (CBP), the State Department, Immigration and Customs Enforcement (ICE), the National Counter-Terrorism Center (NCTC), and U.S. Citizenship and Immigration Services (USCIS), so this isn't exactly a rogue DHS report.

Not unlike that other DHS report that was leaked a week ago to the Associated Press, which found country of origin was a lousy indicator of whether someone is likely to be a terrorist, this new report seriously undermines the rationale for the travel ban: What good is "extreme vetting" going to be if most of the American-based extremists who've tried to commit terrorism here or traveled to the Middle East to join ISIS actually became radicalized long after they arrived here?

So if we're going to be screening out potential terrorists, we'll need to be able to predict the behavior of people an average of 13 years into the future. That doesn't seem like a really great motivation for keeping students and business travelers from seven countries from coming here, frankly. And of those who later became radicalized, their parents tended not to be radical at all, and were probably just as puzzled as anyone about how their precious kid turned into a terrorist. Oh, hey, here's another finding that may be useful in talking about how we actually can stop people from becoming radicalized:

Hmmm... so most of the homegrown terrorists, just like the foreign ones, were at least in part motivated by a sense that the USA discriminates against Muslims or is actually at war with Islam? Guess we need to discriminate a hell of a lot more against Muslims, then, just to show 'em who's boss. That oughta learn us!

Let's just ignore the neo-Nazis and the other crazies. Maybe they'll go away.

But there is actually something we could be doing more of that might actually be of some value in reducing homegrown terrorism. Instead of giving young people reasons to become terrorists, the government could work with Muslim communities to help prevent radicalization by helping young people integrate into mainstream American life, through Countering Violent Extremism programs of the sort that already exist (we could also make sure such programs don't exclusively target Muslims, seeing as how we have plenty of domestic terrorists of the neo-Nazi and Sovereign Citizen variety).

The report also includes a couple of charts which help visualize the time lag between Coming to America and getting radicalized, which, again, would make "extreme vetting" of dubious value:

(Thanks a heck of a lot for not putting this in a pdf format, Maddow Show)

It's Only Fair To Ask: Is Donald Trump Working For ISIS?

No wonder someone felt the need to leak this thing. It largely suggest that if we want to Do Something About Terrorists, a ban on travel isn't going to help a hell of a lot, and may actually make us less safe thanks to the whole perception that America really is at war with Islam, which is why we've wondered whether Donald Trump is a secret ISIS operative.

If facts and data actually mattered, Rachel Maddow might be right when she says this report may very well sink the Trump travel ban. Trump being Trump, however, we're more worried he'll look at the DHS findings and decide that since we can't predict radicalization when people enter the country, the safest move will be a ban on immigration by any foreigners with minor children.