Simple Charts Explain How 90% of Americans Get Almost Nothing 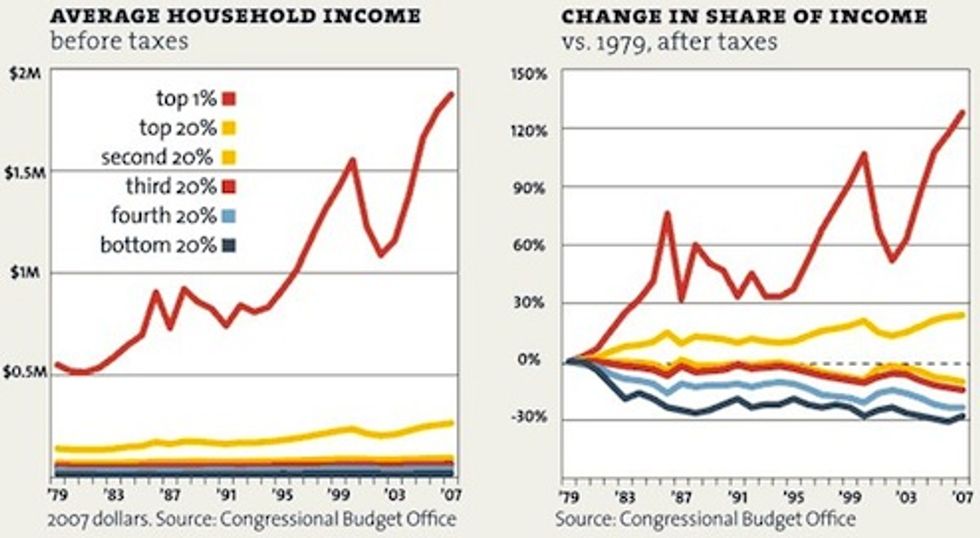 In this ridiculous country, it's "class warfare" when working people would like a fair wage and health insurance, but it's "Morning in America" when the top 1% have harvested nearlyevery dollar of financial gain in this country for the past 30 years. Corporate taxes have dropped as quickly as CEO salaries and bonuses have risen, and we're all supposed to "take one for the team" while Wall Street criminals make up new ways to earn billion-dollar bonuses while you get to spend a couple of months arguing with your insurance company (if you're "lucky enough" to have health care coverage) over whether your kid's concussion or dad's cancer is something that might be covered. Mother Jones put together what is possibly the most useful Mother Jones feature ever: A simple collection of visual charts and diagrams to easily explain exactly what the Reagan/Bush/Clinton/Bush Jr./Obama Republican/Democrat governments have done to this country.

Reagan/Bush Sr. tax cuts not big enough for you? (And by "you," we mean, "the couple of thousand people in America who literally control nearly all wealth in this nation, with our consent.") Then "you" must have loved the Bush Junior tax cuts, and the Obama extension of said cuts. Why should people who earn twenty-seven million dollars per year have to pay a lot of shitty taxes? That's for poor folk to cover with their payroll tax deductions, right?

Anyway, go look at these pretty grafs and maybe print 'em out at the library or whatever, and tape them inside your Tea Party lovin'/McDonaldland relatives' five-year-old reading glasses from the Walmart. Go Galt! [Mother Jones]