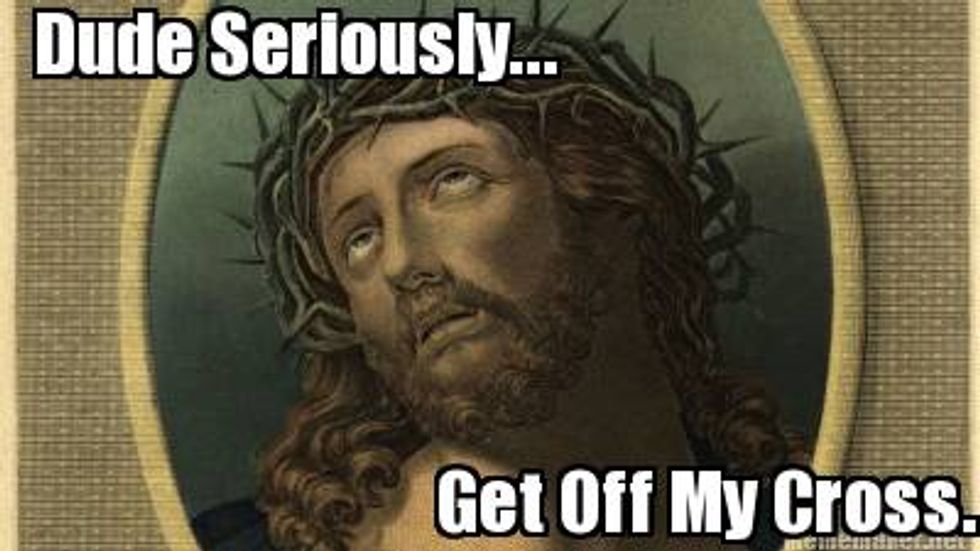 Everybody wants a turn on Jesus's cross these days.

Somebody's gonna have to fire up the old GoFundMe! Or wait, scratch that, because GoFundMe doesn't like bigots who break the law no more, SADFACE. But these nice Christian people, Robert and Cynthia Gifford, need something, because two lesbians terror-attacked their happy fun times Liberty Ridge Farm in upstate New York, by trying to do gay marriage amongst their corn mazes and cow patties. And now the mean state of New York has fined these fine, upstanding people, just for being a-hole bigots who think it's OK to host weddings for the straights, but not the gays:

Owners of a New York wedding venue who were fined $US13,000 for violating the state’s anti-discrimination law are arguing Monday that they should be legally allowed to follow their Christian faith.

They are "legally allowed to follow their Christian faith," HOW MANY TIMES DO WE HAVE TO FUCKING EXPLAIN THIS? Just as the Kentucky governor and judges told Kim Davis that she's free to go to church and knit bible verse prayer cozies for all her menfolks' dicks, but she is NOT allowed to discriminate at her job, these wankholes are going to have to learn that if they want to do weddings at their farm business, then they have to do ALL WEDDINGS at their farm business. If they don't like it, they're free to go plow each other's crops or whatever.

But instead, they're appealing the state's decision:

“It would violate the Giffords’s faith to facilitate this union,” attorney Caleb Dalton told a five-judge supreme court appeals panel.

Of course, these people are saying the exact same thing every other asshole fundamentalist with a business license says: that by providing the space for the gay wedding, they might as well be doing the consummation sex-scissoring part of it, and right in front of Baby Jesus!

Those pizza bigots in Indiana who got $840,000 on the GoFundMe for refusing to cater gay weddings, and then accidentally catered one anyway? The sin of sodomy is inside their pants now, with their gross pizza sharts, and they will be going to hell with Kim Davis. Those dicknose Sweet Cakes By Melissa people who simply refuse to bake penis cakes for the homosexual weddings? They're still going to heaven, because they have stood their ground and continued to live by the words of Jesus during the Sermon On The Mount, which were "NO CAKE FROSTING FOR HOMOS." It was a very short sermon.

Anyway, the farmers should stick to these other activities we found on their website, like the non-lesbian "Corn Maize":

No lezzies in the corn maze!

Oh look, you can ride inside cows, BUT NOT GAY COWS BECAUSE JESUS SAYS THAT'S YUCK.

We assume those are the horses the Giffords rode in on, but we don't want to say "fuck you" to those nice horseys, just to the Giffords. Have fun paying fines and pretending to be Christian martyrs, you dicknuggets!