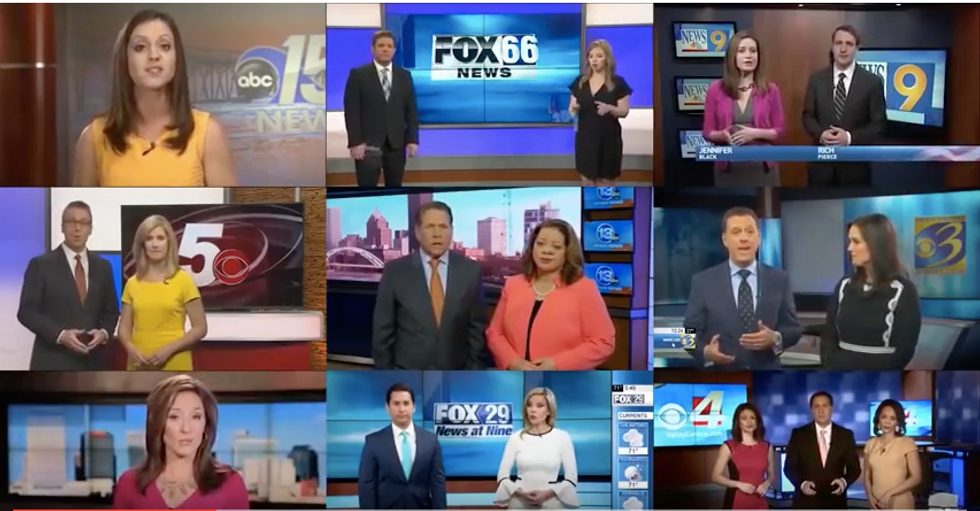 This past weekend, Deadspin published a damning video of Sinclair Broadcast Group news anchors from local stations across the country reading the same script. It could not have been worse for them if said news anchors were literally sitting on the knees of Sinclair execs like well-coiffed Howdy Doody dolls. And the hilarious thing is that they did it to themselves. They thought no one was going to catch on, that every person in every market would see this and think it was the work of their trusted local news anchors. No one forced them to make all their news anchors do this. It was their idea. They had more than enough rope, and they made use of it.

Since then, the company has been dragged all over the internet by good, honest, hardworking Americans who were creeped the fuck out by said video. They have been criticized for making it almost impossible for their workers to quit, by requiring them to sign contracts that require them to pay the company 40% of their yearly salary if they do while also preventing them from taking a job within their field for six months after leaving. Frustrated, anonymous anchors have vented to the media about being made to feel like "a POW recording a message."

One brave station in Seattle, KOMO, refused to read the message to begin with and is fighting against running their "must run" segments at all.

Even conservatives, before discovering that Sinclair was a right-wing media company, were OUTRAGED. In fact, the only person so far who seems to think Sinclair is great is Donald Trump. Who, to be fair, probably does not even know what any of this is even about, other than that Sinclair likes him.

And now, Sinclair itself is speaking out. To its employees anyway.

In a letter to Sinclair newsrooms on Monday, SVP Scott Livingston had a rather creative explanation for what all the hubbub was about. According to him, it was not the fact that all the news anchors were required to read the same creepy and deeply ironic script about how "the media" manipulates people with "fake news," but rather...

The critics are now upset about our well-researched journalistic initiative focused on fair and objective reporting.

Livingston then went on to explain that "the critics" never talk about their awards, or their ratings or any of the good stuff that they should be talking about. Probably because we are all super jealous of them.

* The critics don't talk about *your* journalism awards. They seem disinterested that in 2017 *YOU won* more than 400 awards, including 8 national awards for journalistic excellence.

* The critics don't talk about *your audience growth*: many of your news operations have gained audience consistently and steadily in recent years. We are very proud of this accomplishment and it's a story our critics ignore. The February 2018 ratings period was a good one for us with more than a third of our stations gaining market share vs. the previous year.

* The critics don't talk about the capital investments and the staffing additions Sinclair has made in its newsrooms: we have expanded news by 92 hours in 16 markets in the last two years and we have added 78 news positions since 2015 date.

Well, you don't see "critics" praising Ted Bundy for his selfless suicide hotline work either. Perhaps "the critics" would mention those things about Sinclair, had there not been a damning tape of a bunch of news anchors all being forced to read the same message.

Livingston was also riled up about the fact that "the critics" are talking about how Boris Epshteyn gets a weekly commentary segment, which he feels is unfair because... other people are also allowed to do commentary?

One thing the critics DO seem obsessed with is the roughly 8 minutes a week of clearly labelled commentary that Boris Epshteyn offers in our newscasts each week. The critics continue to say that his former affiliation with Republicans makes him a propagandist. But they never offer any perspective on Boris' appearances. They never mention that ABC News Anchor George Stephanopoulos ran Bill Clinton's Presidential campaign and served as a Senior Advisor to President Clinton for 4 years. Stephanopoulos now hosts an ABC political talk shows and co-anchors 10 hours of news a week for ABC. That is 10 hours of 'must run' content that all ABC affiliates must carry each week hosted by a former advisor to President Clinton. We have no problem with Mr. Stephanopoulos anchoring these newscasts, but think it is odd that Sinclair critics seem to express zero outrage over this. Critics never talk about Chris Matthews, who worked for prominent Washington Democrats, including President Carter, before becoming an NBC show host. Why don't the critics of Boris' at least offer this context? Why are they obsessed with the 8 minutes a week that Boris gets to offer clearly labelled commentary? Remember, no one is trying to hide Boris' past political affiliations. We label him as a former Trump advisor. We are fully transparent about Boris.

There is a vast difference between someone having a show, and requiring a news station to run a commentary segment from a specific person. There is a difference between a news station choosing someone in their community to come on the show and give commentary, or choosing to run a segment from an affiliate, and requiring them to. Boris could have a show on FOX, he could even have a show on ABC or NBC or CBS, if those stations chose to give him one. There are lots of people who do commentary all over the television and all over the internet. I am one of them! But no one is required to publish me, not even WONKETTE.

Even when I have worked at sites where we ran partner posts (this is when you see a post from one site on another site that they have an agreement with), we got to choose which posts we ran, based on what we thought would best appeal to our audience. That is how affiliate agreements work at news stations as well. The editors choose. In this case, the editors are not allowed to choose, and that's why it's bad.

Livingston then criticized the fact that all these "critics" do not even check with Sinclair to confirm their stories! How dare they!

Honestly, most of the Sinclair critics don't seem to do their own original reporting. Do you ever notice that a story written about Sinclair from a west coast publication will include a lot of the same talking points—often the same wording--- as a story written a week earlier on the east coast? These reporters aren't producing original journalism; they are aggregating often-flawed-reporting-content published by other media outlets, without fact checking it—or calling us to confirm any of it.

OH? Maybe that is because Sinclair refuses to talk to "print media."

In emails to New York Magazine, David Smith, the executive chairman of Sinclair Broadcast Group, explained that print media has "no credibility" and that he will not speak to anyone in the industry for any reason.

“Appreciate the interest in your wanting to do a story but we don’t talk to the print media as a general principal as we find them to be so devoid of reality and serving no real purpose. Have a great holiday,” Smith said in response. Later, he added, “Again my experience has consistently been that even with an interview it’s of no consequence in terms of spin, facts or distortion, political bent etc. The print media is so left wing as to be meaningless dribble which accounts for why the industry is and will fade away. Just no credibility. see ya.”

Not even Cat Fancy? For shame, Mr. Smith. For shame.

By contrast, we have hundreds and hundreds of journalists in Sinclair, who go into the field each day, conduct their own original interviews --face-to-face---and create truly original content for our their local audiences. Your original reporting is our core strength. It's why we are growing and our critics are increasingly becoming obsolete. It's why surveys show news consumers trust you more than they trust the bloggers.

If Sinclair thinks it can spin its way out of this, it's wrong. If a picture is worth a thousand words, a video is worth a million. The reason Sinclair went after local stations in the first place is because people trust them. That is their value. People trust them to provide news that is relevant to their community, and they want to believe that they are doing so independently. This video destroys that credibility -- which is unfortunate! Because as Livingston points out, many of these stations really are doing some great journalism, apart from the things they are required to run from Sinclair.

Right now, Sinclair owns 173 stations across the country, and it's trying to work out a deal with the FCC that would let it buy up stations owned by Tribune Media so it can own even more -- so that it can own 72% of local news stations across the country. That is terrifying and wrong, and it's even more terrifying and wrong when we can see what they are doing.

Here is a list of Sinclair-owned stations. The only thing left to do is boycott.

Wonkette is INDEPENDENT AS HELL. But also very dependent on your contributions! Click here to tip us and support independent media!