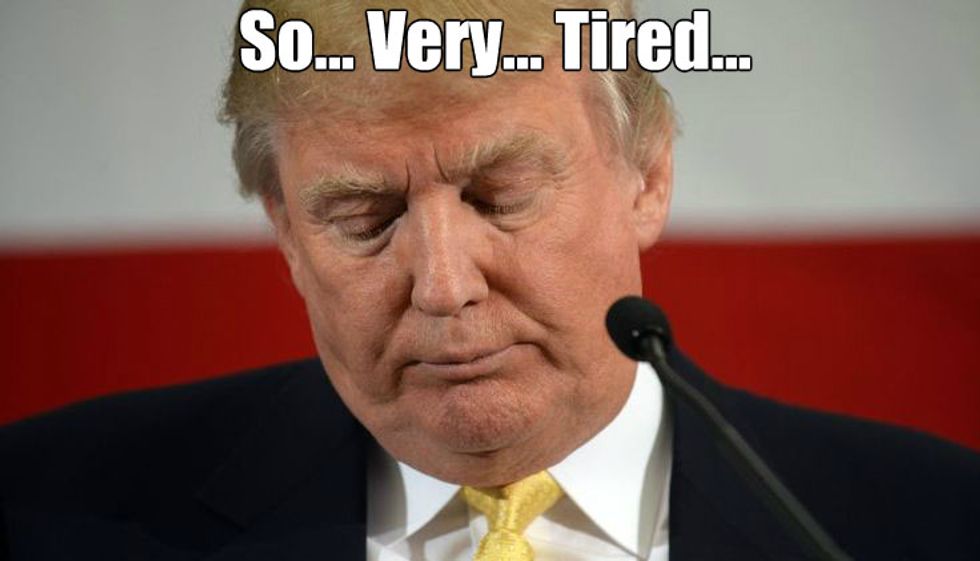 Poor Donald Trump accidentally slipped during his speech to Islamic leaders Sunday in Riyadh and departed from his prepared text, saying "Islamic terrorism" instead of the less-incendiary "Islamist terrorism." According to a "Senior White House official," the error occurred because the president was "exhausted":

“He’s just an exhausted guy,” the official told reporters on background, after many pointed out that Trump avoided the term "radical Islamic terrorism," during the speech to leaders of more than 50 Muslim-majority nations.

Rex Tillerson Needed A Nap, So We Guess It's War With North Korea!

You have to wonder whether the man is fit to be president, don't you? He just doesn't have the stamina. Before you know it, he'll be napping all the time like a common Tillerson.

Trump had been warned to not use his favorite set of magic words, "radical Islamic terrorism," since it might prove offensive to his Saudi hosts. He did manage to avoid the full phrase, probably because he's just a big wuss like Barack Obama now. Since when has Donald Trump cared what people think, huh? And now he's "exhausted"? Following the speech, Trump cancelled a planned appearance at something called the "Tweeps forum," where Ivanka filled in for him.

Hmmm... perspective is everything!

On Saturday, Trump even inclined his head to receive a big gold medal from Saudi King Salman, only it very definitely wasn't a "bow," it was more of a bob or a curtsy, or a dip, because America Bows to No One, except when America is taller and wants the bling:

The bow, nod, squat, bending-over, or other departure from the rigid vertical alignment left Trump buddy Roger Stone angry and sputtering, although how this particular instance could be distinguished from Stone's usual angry, sputtering state is a matter of debate. Stone took to Twitter to express his very candid thoughts on the matter:

Also, @Wonkette and @DoktorZoom are blocked by Roger Stone. Wuss.

We think Stone's just mad because the White House foiled his clever plot to stow away in a wheel well of Air Force One, wearing a bespoke parka loaded up with bottles of oxygen and Bombay Sapphire.

Later in the day Sunday, Trump had recovered enough to help the Saudi king and Egyptian President Abdel Fattah el-Sisi, grasp a glowing globe to formally open the new Global Center for Combating Extremist Ideology, although everyone thought it looked more like he was fondling a cosmic soul-collecting orb or some kind of glowy magic thing from popular "Harry Potter" author J.K. Tolkien:

Online speculation varied as to whether the Orb is the source of Trump's evil power, or actually drained it, leaving him exhausted. In any case, it's clear that Trump is now King Salman's bitch (which is a movie we'd probably avoid, too):

All the exhaustion and orbing left us remembering a kinder, better America, where our wizards didn't have to travel to foreign lands to conjure cosmic energies:

Barry the Grey has enough stamina that he won't have to have one of his daughters give a speech for him, either, tell you what.

Yr Wonkette is supported by donations from readers, aye and the raucous laughter of harlots. Please click the "Donate" clicky for the former!