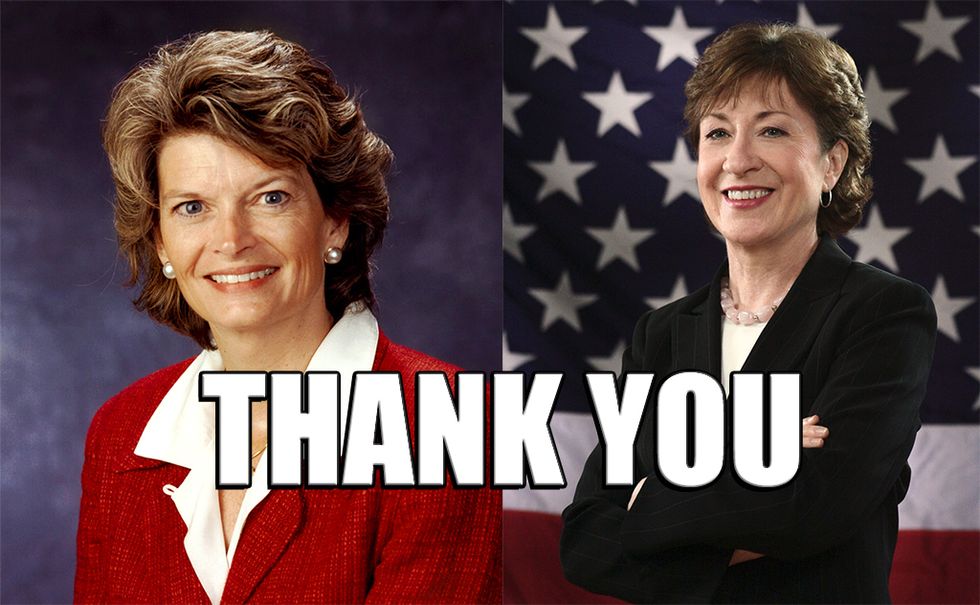 Happy Friday, Wonketariat! We've been guzzling our coffee since last night just to get you all the newses you need to know about! Here's some of the things we may be talking about today.

The Senate killed SkinnyCare late last night in a 49-51 vote that saw the defections of John McCain, Lisa Murkowski, and Susan Collins.

After casting the vote that kicked off this week of mind-numbing stupidity, John McCain saved us all from SkinnyCare. Thanks, Walnutz.

House Republicans have concocted some amazing fantasy world where Hillary Clinton was secretly working with the Russians to undermine Trump. This story has dragons, orcs, elves, and dwarfs, it's only missing magic rings and swords.

The House passed a $789 billion defense spending package that contains a "down payment" for Trump's border wall. Remember how Trump told us to believe him that Mexico was going to pay for the Tortilla Curtain?

Some Republicans have bucked Trump in public, but don't let those silver tongues and Southern drawls fool you.

The White House, Treasury, House and Senate leadership are forming a Business Roundtable for multi-million-dollar tv and radio ad campaign to push tax reform. They're expected to push all their hits, like corporate tax cuts, and they've brought in a former Bushie to nail shit to the wall.

The Justice Department unveiled a new anti-gang effort against El Salvadoran cartel MS-13, though ethics officials are worried that the effort could be another violation between the DOJ and the White House.

Labor organizations are screaming about the appointment of George Nesterczuk as director of Office of Personnel Management on account of his record of "discrimination, nepotism, and political influence." Well, with a resume like that one can certainly see his appeal to Trump.

H.R. McMaster has "You're Fired" Derek Harvey, the Middle East advisor on the NSC, and he isn't saying why. The Capitol Hill rumor mill thinks that Harvey was a mole for Mike Flynn.

It wasn't just the trans-ban; Trump enacted several anti-LGBT measures this week, but it's OK because the GOP is super friendly with the "EL-BEE-GEE-TEE-QUE."

In what can only be an Andrew Dice Clay impression, The Mooch ran his filthy little mouth to a reporter in an attempt to take down Bannon and Priebus, and then bitched about the reporter running the story. Boy, The Mooch must really love Trump; he certainly knows who's sucking cock.

Sarah Huckabee Sanders doesn't know much of anything, but she she does know that The Mooch is sorry. She probably just hasn't spoken to Trump about his love for his new "Mini-me," or the "generals" he's considering for Chief of Staff.

President Bannon is running his own secret PR op inside the White House, essentially leaking state secrets to a hand-picked spox with deep Mercer ties, and that's on top of several conflicts of interests. Good thing Trump issued a retroactive ethics waiver.

The NON-PARTISAN Government Accountability Office is investigating whether or not the Trump administration violated ethics laws to promote TrumpCare after a report from the Daily Beast found that Tom Price's HHS was quietly filming and uploading bullshit Obamahate testimonial videos.

The FCC is being sued by an investigative journalist for hiding withholding information about a "cyberattack" that knocked out public commenting shortly after John Oliver ran this piece on FCC chairman Ajit Pai's history as a corporate telecom stooge trying to kill net neutrality.

Democrats are accusing FCC Chairman Pai of harming consumers and small businesses during the House Commerce Committee's Subcommittee on Communications and Technology, with Pennsylvania Democratic Rep. Michael Doyle stating, "I'm concerned that maybe you just don't get it," after Pai stated that the number of comments in favor of net neutrality was irrelevant.

Republican men have been openly hostile towards lady legislators lately. I wonder if they're all just suffering from male menopause?

The Democratic Senate Majority PAC has raised $4.5 million Ameros this year, and they're expected to dump all of that money in the 2018 mid-terms.

A bunch of US federal agencies and the Greek police have arrested Mark Karpeles, the former CEO of one of the largest Bitcoin exchanges, over allegations of laundering $4 billion Ameros. The Internet's magic funny money is certainly becoming serious business.

Trump's trans-ban has netted a wave of donations for Danica Roem, a Virginia legislative hopeful who just happens to be trans.

No, you're not crazy, summers are getting hotter than hell, according to new data from some awful LIBERAL university smart guy with a calculator.

Russia is demanding a reduction in State Department staff in Russia and will seize US diplomatic property in response to the passage of sanctions. Uh-oh, sounds like poor Pooty is pouting in Red Square! "Izvinite, snezhinka!"

Hold on to your butts, Pakistani Prime Minister Nawaz Sharif was booted out of office (AGAIN) this morning over corruption charges, leaving the future of India's nuclear powered arch rival sketchy, at best.

Israel has banned Muslim men under 50 from the Al-Aqsa Mosque in Jerusalem (AKA: Noble Sanctuary/Temple Mount) after a wave of protests and boycotts erupted in response to strict Israeli security protocols enacted after the death of two Israeli police officers.

The State Department has ordered relatives of American diplomats to GTFO of Venezuela before a controversial vote to rewrite the country's constitution is held Sunday.

Jeff Sessions went on Tucker Carlson and said Trump's comments were "hurtful," but he understands that he's only being thrown under the bus so Trump can bulldoze Middle America to make shitty strip malls and titty bars.

The New York Times's James Risen is walking away with a fat check after another round of buyouts that includes book reviewer Michiko Kakutani and the entire copyediting desk. God ting poples has spel chek.

Damn Peggington Noonington hath opined that, one, Donald James Trump, is akin to one, Woody Allen, however, Mr. Trump has yet to achieve the comedic timing of Mr. Allen. HARK, dear reader, for this observation is astute as both men have a tendency to grab the ass of their daughters. [Archive]

GOOD NEWS, EVERYONE! Are you a do-gooder lawyer with a soul? Does your broke anti-Trump NPO need some legal help? A new match-making service connecting Democratic lawyers looking for pro-bono work with oppo-NPO's is launching

And here's your late night wrap-up! Stephen Colbert doesn't think ANYBODY could block The Mooch from being a cock; Seth Meyers took A Closer Look at The Mooch; The Daily Show can't blame Reince for being paranoid; and James Corden has a hard time spelling all these damn names (and we can't blame him).

The fight isn't over! There's still a long way to go before we can rest easy, donate to our coffee/booze fund today!
Dominic Gwinn