Smell You Later, Darrell Issa! (Because We Will Follow The Odor Of Kerosene) 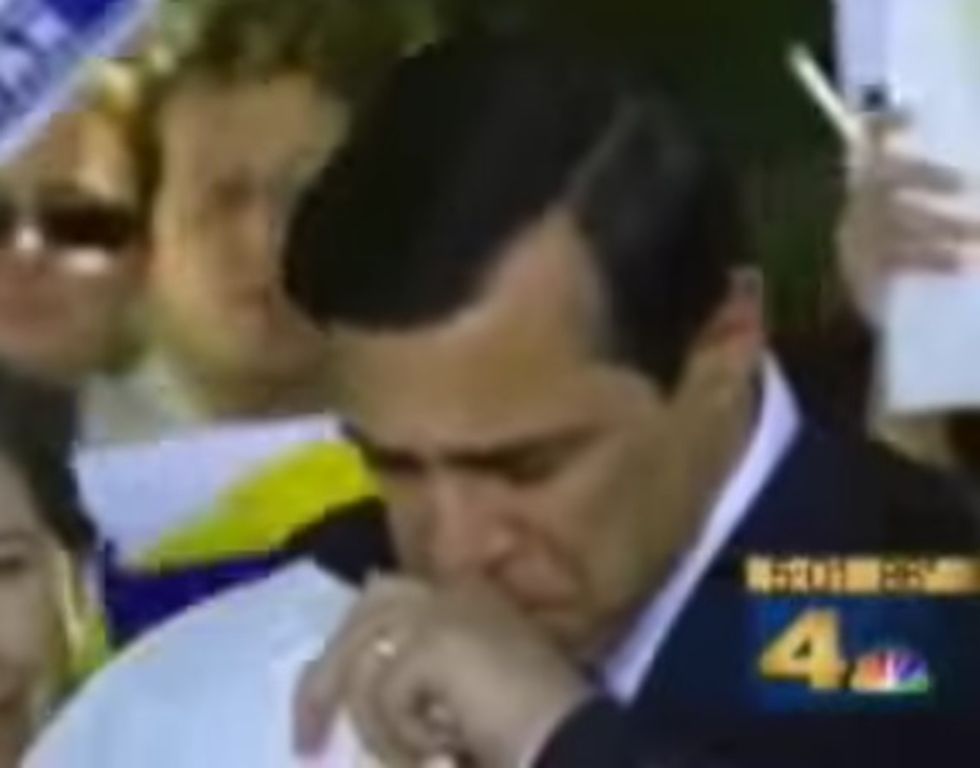 If you were not living in California in 2003, you probably did not laugh and laugh at the pain of another, as car robber firebug Darrell Issa CRIED AND CRIED because Arnold Schwarzenegger would not let him be governor :(

I mean, that video above gives you a taste, but dude went on forever, trying to get through his statement without blubbering -- UNSUCCESSFULLY -- while all the nice folks clapped for him like they clap for the little girl who FINALLY gets to the finish line in the swim meet because she did not have a regulation swim team bathing suit and her top fell down and she had to do the backstroke with one arm and hold her bathing suit over her little boobs with the other, and what? I have no idea what you're talking about.

Anyway, Darrell Issa, he's this (arsonist and car robber) dick, and he's retiring from Congress to spend more time not getting elected to Congress!

Issa is incredibly unpopular despite or because of being a nine-term (? math!) congressman from San Diego -- a reasonably conservative (for California) white place with money. Issa chose to spend his congressional career making up shit about Benghazi, the IRS, and Fast and Furious -- and yet never actually got the goods on Mr. Presidenting While Black, regardless of the fact that Issa proclaimed him "one of the most corrupt presidents in history." THEN Issa questioned whether Barack Obama was even American. And THEN THEN Issa sent out a mailer about how awesomely he and President Obama were working together, and Barack Obama read him for FUCKING FILTH.

“Some of them say, ‘I’m praying for you,’” Obama said. “And I don’t question the sincerity that they are praying for me: ‘Please change this man from the socialist Muslim that he is.'”

“I’m sure it’s more sincere than that,” he said, laughing.

Laughing as he spoke, and at points locking eyes with his also laughing political director David Simas in the back of the room, Obama said he couldn’t believe that Issa, now locked in the hardest race of his career, had sent out the mailer, which brags, “I am very pleased that President Obama has signed into law the Survivors’ Bill of Rights — legislation I cosponsored to protect the victims of sexual assault.”

“That is the definition of chutzpah,” Obama said, adding later, “that is shameless.”

We don't know which Democrat is going to replace Darrell Issa in California's 49th. (It is not going to be Republican Diane Harkey.) Mike Levin, who is a longhaired hippie #resister who USED to be So Mr. Corporate You Couldn't Fucking Believe It (we knew him, glancingly, in Orange County), had been making a right proper nuisance of himself at all Issa's town halls until Issa stopped doing town halls. And Doug Applegate is a Marine colonel who almost beat Issa last time -- Issa won by just 1600 votes, the narrowest race in Congress. And Sara Jacobs is pretty and young and worked at the UN and at State, which makes her a far left Hillary Lover Communist or something, according to the guy who will no longer have a job as Darrell Issa's spokesman, quite soon!

That is all well and good, and Godspeed to the eventual winner, who will not be Darrell Issa, because he is a vicious cur who made even reasonably conservative San Diego hate him, by being a "cut-rate Javert." Wait, that was not Darrell Issa, that was dickhole smegma-face Jason Chaffetz, who ALSO chaired the House Oversight Committee, and who ALSO investigated Benghazi so much, and who ALSO retired from Congress before his time, because it just wasn't as much fun when you didn't have Hillary Clinton to keep kicking around, although to our knowledge Jason Chaffetz neither committed grand theft auto nor burned down his own building for the insurance money and then went on to accuse OTHER people of being "corrupt."