Smutty Radio Shack Ads Wad Panties Of At Least One Million Moms, Probably More Like A Billion Or Something 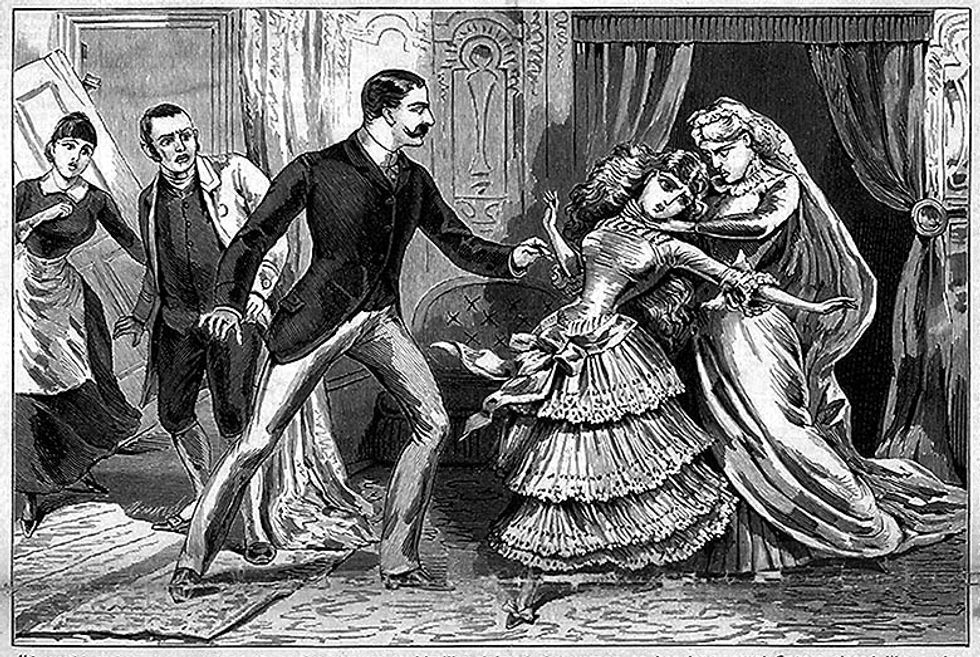 The steampunk cosplayers at "Radio Shack" (seriously, why don't they just call it "Ye Olde Vacuum Tube And Difference Engine Emporium"?) have transgressed the unwritten law,according to the American "Family" Association, by promulgating advertising that normalizes, nay, ENDORSES wanking and sexxxhibitionism by Our Innocent Youth.

The shocking BDSMLGBTQ videos in question include an ad called "Laundry," which is so vile, so soul-wrenchingly decadent, that we will let the AFA describe it in all its horror. Warning, strong innuendo of adolescent self-abuse is contained in this description, so reader discretion is advised:

In "Laundry," a dad enters the room with a laundry basket and says to his son, "Mom just finished laundry. Anything you want to tell us?" The boy has a guilty look on his face and replies, "Sometimes I have these funny feelings and I'm not sure what's going on, but I looked online and it said it was normal." The dad has a surprised look on his face and is almost speechless, but says, "Uh, you left your phone in your jeans and it went through the wash."

OK, we got through that, and we still believe in America, battered and torn though she may be. But there's more. Much, much more, and worser.

In "The Talk," the dad approaches his son and says, "I think it's time we had a little talk about 'protection.' I know you just want to get out and show it off, but you can't just go swingin' it around all willy-nilly, trying to impress the girls. You gotta be careful." He then displays and refers to a tablet, remarking "this glass is fragile."

Yeah, OK, we're not really sure what that one was about, either. The son thinks Dad is telling him he needs to wear a condom when he's flashing his junk at girls? Whatever, it's obviously smutty and horrible and will give The Children PTSD that turns them into sluts and Obama voters. It's BAD, m'kay?

Fortunately, there's something YOU, the Wonketteer, can do to combat this creeping sharia of sexxytime ads for a company that we're not quite sure why it exists now that there's Best Buy and Apple stores. You can send your "email letter" direct from the AFA Email Post Office with whatever subject line and whatever text you, the concerned Millionth Mom, decide is appropriate to deal with this affront to the national sensibility. We trust that you'll do the right thing.