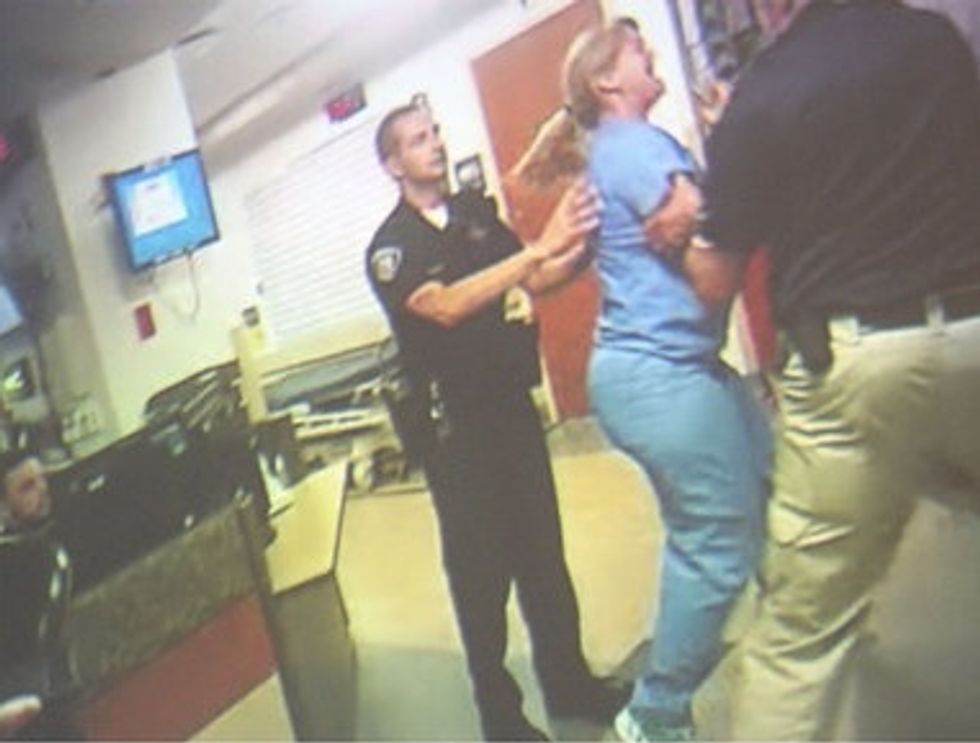 Oh shit. Guys, you know what kind of story is coming when the kittens are here.

Kids, it's another of those stories where we need to remind you not to hurl your computer, tablet, or phone across the room. If you're reading at work, you may want to make sure you can muffle your curses as you proceed. A Salt Lake City nurse was illegally placed under arrest, with excessive force, by a Salt Lake City police detective who dragged her off to jail -- for the crime of explaining that, no, hospital policy (and a 2016 decision by the Supreme Court) prevented her from drawing blood from an unconscious accident victim, even though the detective really, really wanted the blood sample and insisted he needed the blood sample because he's a cop. The Salt Lake Tribune explains:

Footage from University Hospital and officer body cameras shows Detective Jeff Payne and nurse Alex Wubbels in a standoff over whether the policeman should be allowed to get a blood sample from a patient who had been injured in a July 26 collision in northern Utah that left another driver dead.

We see Wubbels explaining to the cop, and to a supervisor on speakerphone, that there are three conditions under which she can draw blood: If the police have a warrant -- even an electronic one -- authorizing the blood draw, if the patient consents, or if the patient is under arrest. She even holds up a document with the policy on it for Payne and his body cam. "I'm just trying to do what I'm supposed to do," Wubbels says, apologetically.

Payne Goes into full Tough Cop Mode: "OK, so I take it without those in place, I'm not gonna get blood. Am I fair to surmise that?" The administrator on the phone tells Payne that he's making a "huge mistake, because you're threatening a nurse," and Payne loses it, says "OK, we're done. You're under arrest. We're going. You're done" as he grabs for Wubbels.

Much though you guys hate the videos, you probably should try to get through this one, because Jesus H. Christ in an illegal chokehold, this is awful:

As Payne cuffs Wubbels, she's still holding the crumpled blood-draw document in her hand, and we hear the supervisor trying to tell the cop that administrators are on the way. Wubbels screams, "Help! Help! Somebody help me! Stop! Stop! I did nothing wrong!" as police officers, including some there providing security for the hospital do nothing, because who's going to interfere with a Fellow Officer?

The Tribune also notes that, in earlier portions of the hospital and body cam videos, Payne

threatens to take Wubbels to jail if he doesn’t get the sample, and he accuses her of interfering with a criminal case.

“I either go away with blood in vials or body in tow,” Payne says.

At another point in the video, after he's put Wubbels in his patrol car, Payne tells another cop that he's going to get even with University Hospital when he's working his other, off-duty job with an ambulance company:

“I’ll bring them all the transients and take good patients elsewhere,” Payne says.

He seems nice. We bet the people of Salt Lake City feel a lot safer knowing brave men like this are not only arresting uppity nurses, but also making community healthcare decisions.

Karra Porter, an attorney representing Wubbels, showed some of the video at a press conference Thursday. Porter said that no claim or lawsuit against the city or the police department has been filed, but that she's talked about the incident with SLC police in hopes that the department will take the opportunity to educate officers (on how to not be power-tripping dicks, we added for her).

No charges were ultimately brought against Wubbels, who says she'd heard stories of other healthcare workers being bullied by cops, and if you want proof there's a problem, here it is on video:

“I can’t sit on this video and not attempt to speak out both to re-educate and inform,” she said. Police agencies “need to be having conversations about what is appropriate intervention.”

Detective Payne has been temporarily suspended from a program where cops are trained to draw blood samples, but hooray, he's still on duty while the case is investigated internally, according to SLC police spokesperson Sgt. Brandon Shearer, who also said the department has held training of some kind following the incident at the hospital.

Payne, for his part, doesn't seem to see why anyone thinks there's much of a problem here. His written report said he'd been asked to get a blood sample by police in Logan, Utah, to see if the accident victim -- who, again, was the victim of another driver -- had any intoxicants in his system. He said he was trying to explain to Wubbels that he had "implied consent" from the unconscious victim for a blood draw, but the nurse just wouldn't listen, so Payne's watch commander told him to arrest her for interfering with an investigation. The watch commander said in his report on the incident that he'd tried to explain the whole implied consent thing to Wubbels on the phone, but she cut him off and insisted that without a warrant, there would be no blood.

Guess who knows the law and who doesn't? Attorney Karra Porter told the Tribune that Utah courts haven't recognized "implied consent" since 2007. Looks like it's been 10 years since some Utah cops have been updated on that. And while the U.S. Supreme Court did rule in 2016 to allow warrantless breathalyzer tests in drunk-driving arrests, drawing blood still requires a warrant -- and in this case, the patient wasn't a suspect, but a victim who wasn't suspected of wrongdoing in the first place.

Now, it turns out the accident victim, William Gray, is a reserve officer in the Rigby, Idaho, police; his main job is as a truck driver, and he was badly burned when a driver fleeing from the Utah Highway Patrol crossed the center line and crashed his pickup head-on into the semi driven by Gray. The driver of the pickup died; Gray is in serious condition at University Hospital.

Detective Payne said in his report that he wanted the blood draw to protect the patient, not to gather evidence of wrongdoing, so our completely amateur legal analysis is that the detective wanted to be absolutely sure a Brother Officer would have a clean toxicology test, just in case the idiot who crashed into Gray's semi -- or his family -- sued. But then a nurse went and got in his face and started spouting off about rules, and so it was time to go Dirty Harry on her, because as every good cop knows, rules just get in the way of Justice.

It's policing in America, 2017 style. The real question is why Wubbels and the staff of University Hospital haven't profusely thanked Payne for not shooting her dead.

Yr Wonkette is supported by reader donations. Please click the "Donate" clicky and we won't have to get rough.