So You Want To Be A Journalist In Donald Trump's America? 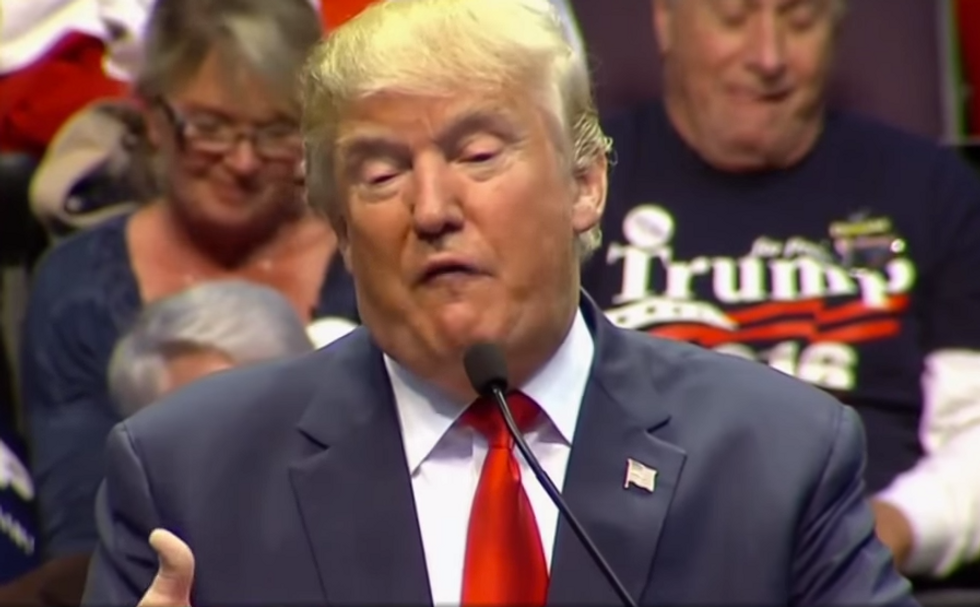 He's kind of a pussy.

Did you hear about the great Secret Service/TIME magazine journalist kerfuffle-squabble-foofaraw at Monday's Donald Trump rally at Radford University in Virginny? It was intense! There were Black Lives Matter protesters, saying protests! A journalist named Chris Morris wanted to get closer to the action, but he was trapped in the press pen, where Donald Trump sticks journalists like caged chickens. So Morris tried to slam through the Secret Service agent standing guard, and when the agent said, "Get in the pen," Morris responded with the traditional American greeting to a Secret Service agent, which is to keep advancing and say "FUCK YOU!" (Bad move, dude. You do not EVER do that to a Secret Service agent, like gah were you born next week under a rock?)

So the Secret Service dude said "What?!" and proceeded to lay the smack down. Here, look at the videos and decide if we are wrong about what happened. (We are not. Even the TIME magazine report on the incident basically says what we said, without the #jokes.)

Here's moments prior. The reporter says "f*ck you" — that's when it got physical pic.twitter.com/h9K2wIbEWQ

[contextly_sidebar id="eJXgPXs5F5sa9oc4gZuOAqNn6c4nVLTz"]Erm, OK. So we would like to Just Ask Questions for a few moments, about this little incident. Because even though the reporter seems like he was acting like a dick, doesn't this also seem a wee bit violent? But then again, isn't piggish violence pretty much the norm at Trump events? Sometimes his supporters like to yell violence words at protesters like "Light the motherfucker on fire!" and "Seig heil!" Sometimes they prefer to yell words that are easier to pronounce, like "nigger" and "monkey." Sometimes Trump himself says, "I'd like to punch him in the face" about protesters removed from his events! Don't Trump and his hick-ass lemmings seem nice?

And maybe the nice Secret Service agent dude was just Doing His Job, just like the Secret Service was just Doing Its Job on Monday night when it ejected 30 black people from another Trump rally in Valdosta, Georgia. Their crime? Being black quietly, or more specifically, "standing silently at the top of the bleachers." The rally hadn't even started and Trump asked the Secret Service to get rid of them, in case they were planning to blackishly take flight in jetpacks and terrorize all the white people to the sweet sounds of Beyoncé's "Formation," or WHATEVER THE BLACKS DO.

[contextly_sidebar id="yyUmSliJrmkNfdowhAboci9HHVXQv3Rj"]But back to the big fisticuffs with the TIME magazine guy. Is this out of character for how journalists are treated by Trump? When Univision reporter Jorge Ramos decided to be sassy and Mexican by asking Donald Trump sassy, Mexican questions, Trump had him deported from the event. And as it turns out, Trump has all KINDS of weird rules (enforced by the Secret Service, naturally) for where the press is supposed to sit and how they're supposed to behave if they want the privilege of covering him. He apparently doesn't like it when media have unfettered access to him OR his sycophantic dumbass followers:

Often reporters are able to speak with attendees before an event is set to begin, but lately reporters have found themselves confined to media-only areas by Trump staffers. [...]

Campaigns often keep reporters in designated media areas during campaign events. ... Trump's campaign is far from the only one criticized by the media for its treatment of the press (see Hillary Clinton's in the first few months of her campaign). [...]

But Trump's overall approach to the media — including direct attacks on reporters and specific outlets — has been particularly harsh.

[contextly_sidebar id="Cn5y3yhsEmAnYjgpOi6aE90nLK526u2T"]Is it because he is a pompous man with a tiny dick, like Marco Rubio said?

A few more questions come to mind! One might assume the be-turtlenecked TIME reporter knew ze Trump rules, but maybe he didn't? Did the Secret Service forget to tell him, "Oh yeah, you have to stay in a cage in the corner" when they screened him? Did the reporter's mom forget to tell him, "Don't try to rassle the Secret Service, 'less you wanna get fucked the fuck up," when he was a baby?

BUT! Even if Brooks was screened by the Secret Service and knew the rules and now admits he was kind of a dunderheaded rage queen about the whole thing (according to TIME's statement, he does, but again, he says it without our #jokes), is this what life for journalists would be like under President Donald Trump?

[contextly_sidebar id="0iJqHfZ1S5HtVLdi4XlCD1BfWuajvDxL"]Are Trump's rules -- which, again, are FAR more restrictive than what other campaigns require -- simply designed to protect him from journalists who write mean things about how he's a big honking racist whose teeny tiny boner goes like "Bing bong! Bing bong!" whenever he sees his hot daughter Ivanka? Is that why he corrals them together in a designated area, and then, according to TIME, "singles [them] out for ridicule during his speeches" for the amusement of his shart-swilling fans?

[contextly_sidebar id="Ybry3WaCg6exlNo86lhmq9I8PBoGksNu"]Because it kind of sort of seems like Trump doesn't like the press, just maybe. Univision deflates his pride by pulling out of the Miss Universe pageant? Better sue 'em! Megyn Kelly makes his allegedly tiny thimble-penis even less terrific by quoting him verbatim during a Fox News Debate? Better have a million conniption fits on Twitter and then refuse to show up at the next debate. Is this why Trump wants to "open up" libel laws, so he can bomb the shit out of journalists who make fun of him, by suing them?

Maybe Trump doesn't hate ALL journalists, the same way he doesn't hate ALL Mexicans. Does he just hate the ones who act like Mexican rapists, or former presidents of Mexico, by hurting his feelings?

Based on Trump's whiny ass titty baby treatment of the press during the course of this campaign, we feel it's only responsible to ask one final question: Is Donald Trump just a YOOOOOGE fucking pussy?

WE ARE JUST ASKING.