Some Lady: I Did Sexting With Anthony Weiner And All He Offered Was Help Getting Me On This Lousy Politico Panel (UPDATED!) 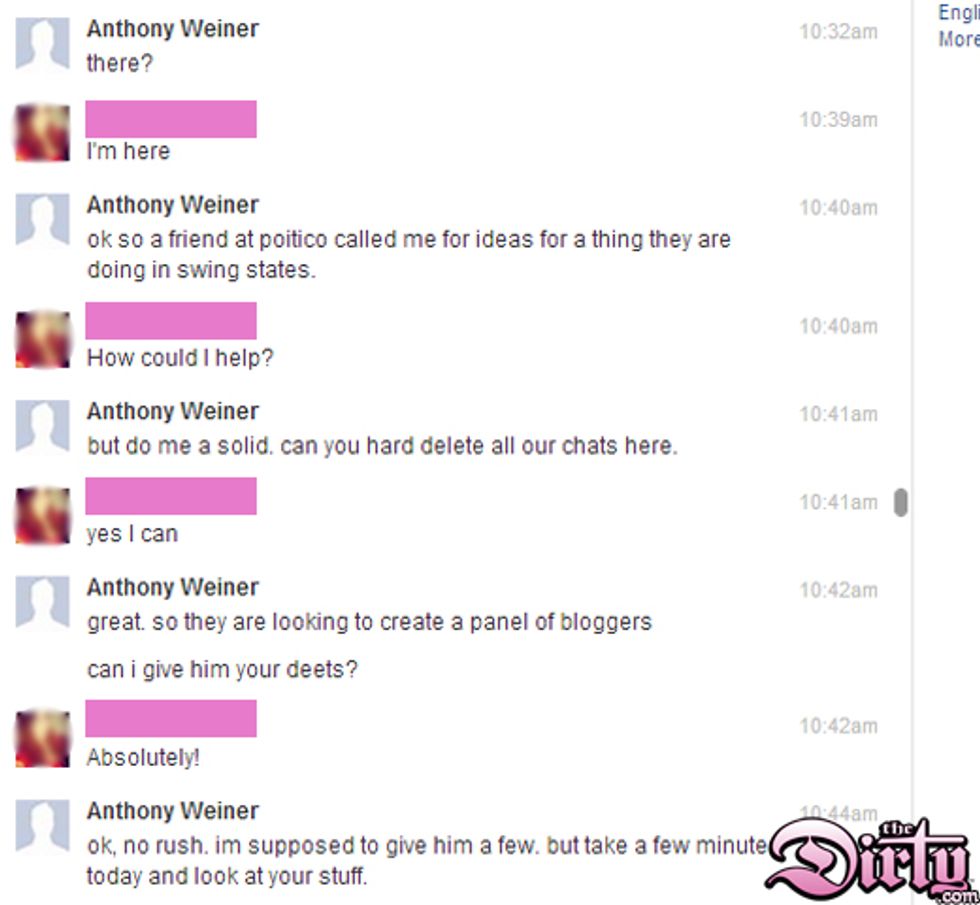 First prize for doing sexting with Anthony Weiner, according to some lady, is help getting on a Politico panel.

Second prize is help getting on two Politico panels.

The Dirty, via Buzzfeed, has ... oh, let's see ... screenshots of unverified vintage from Anthony Weiner (POSTING SEXTS UNDER HIS FULL NAME, BUT ALSO UNDER THE NAME CARLOS DANGER because FUCK YEAH) and that may or may not be pre, post, or contemporary to Anthony Weiner's schlong ruining all our lives and America, forever. UPDATE: Anthony Weiner says, yes, he was trying to fuck that lady.

Here, have some more gross sexts! (Sexts, like children, are only beautiful when they are your own.)

My source is solid. She really thought Anthony Weiner and her were in love, they spoke on the phone daily multiple times a day for 6 months. Anthony Weiner played with her emotions and mind. Most calls were phone sex. He promised her many things including a condo in Chicago (1235 S. Prairie Ave) where they were planning to meet up to have sex. Anthony Weiner has a shoe fetish, particularly heels.

We will go with "all the Jezzies."

Here is Anthony Weiner's full statement, for what that is worth:

"I said that other texts and photos were likely to come out, and today they have. As I have said in the past, these things that I did were wrong and hurtful to my wife and caused us to go through challenges in our marriage that extended past my resignation from Congress. While some things that have been posted today are true and some are not, there is no question that what I did was wrong. This behavior is behind me. I've apologized to Huma and am grateful that she has worked through these issues with me and for her forgiveness. I want to again say that I am very sorry to anyone who was on the receiving end of these messages and the disruption that this has caused. As my wife and I have said, we are focused on moving forward."