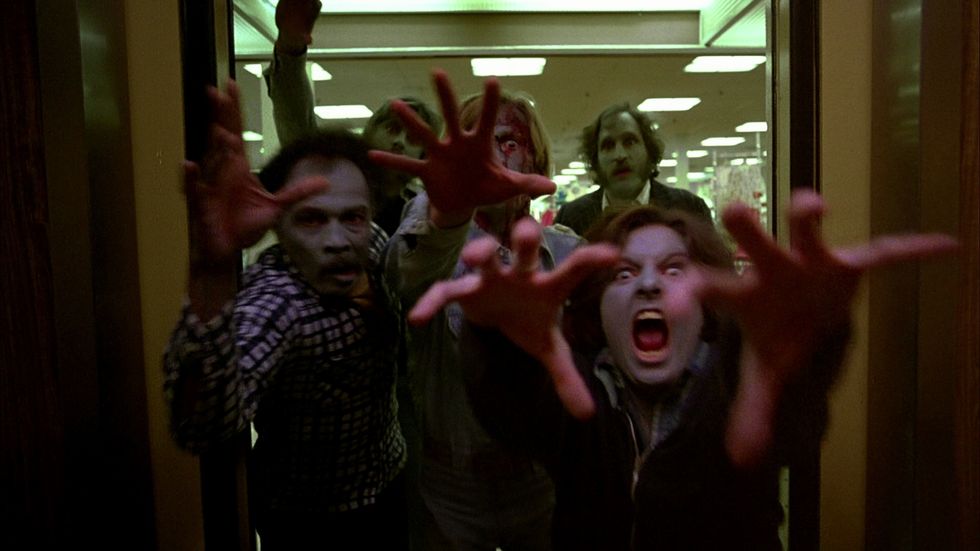 Wonkers! Put your deerstalker caps on and get ready to do some detective work, because we are about to jump down the weirdest rabbit hole I have ever discovered. This shit goes DEEP and I cannot do it alone.

Earlier this week a headline piqued my interest -- Woman kills boyfriend after spat with reptilian cult. RELEVANT TO ALL OF MY INTERESTS, thought I!

Barbara Rogers fatally shot her boyfriend, Steven Mineo, in the forehead from point-blank range Saturday in their apartment in Coolbaugh Township, authorities said. Rogers told officers Mineo, 32, was having “online issues" with a cult and asked her to kill him, said Lt. Steven Williams, of the Pocono Mountain Regional Police. She said her boyfriend believed the cult's leader to be a “reptilian" pretending to be a human, according to an affidavit.
Rogers, 42, told police the group centers on “aliens and raptures." Online postings associated with the cult detail a theory that a group of alien reptiles is subverting the human race through mind control.

But oh, did I ever not know what I was into, because as soon as the Daily Mail revealed the identity of the online reptilian cult, I went to check it out. And it is BONKERS.

Apparently, the cult doesn't have a name. Its leader, if you will, is this lady Sherry Shriner, who has but one picture of herself on the internet, which I assume was taken at some point in the 1970s.

Sherry is claiming that she actually tried to warn Stephen that his girlfriend was a Vampire Witch Reptilian Super Soldier, but he wouldn't listen, and that is why she murdered him.

She also made this video to explain how their last YouTube video proves this. It is amazing. Please, please watch it.

She also has approximately 85,000 different Geocities webpages, all of which are filled with WONDER and DELIGHT.

Here are some things I have figured out about Sherry and her beliefs so far!

-- She believes she is or was an angel, and is also god's daughter and Lucifer's sister. As such, she wrote a book in which she interviewed her brother, the devil, and it is available for purchase on Amazon.

-- She sells something called ORGONE BLASTERS. They're basically just very pretty looking crystals that she claims do all the things.

Said orgone blasters really help with soul-scalpers and dead people. And the Obamas hate it, so it must be good.

My Orgone has destroyed the Capricorn Star-Ship, the Shema star-ship, Planet X - Comet Elenin, and thousands of UFOs! It Works Folks! It's the Only thing that works against Alien-Demonic-Zombie-Vampire- beings! The "dead" hate it! The Aliens hate it! Politicians who have been soul-scalped by Reptilians hate it! Obama hates the White House, Michelle sleeps in Hotels around D.C...the White House Senior Staff meets in air-sealed rooms under the Capitol...why?? Because they HATE the Orgoned air in D.C. !!
Orgone will cleanse your air/water/food, dissolve chemtrails above your home, keep evil beings out of your home and yard, stop night terrors, it has 101 uses.

Unrelated, there is also a very interesting Wikipedia page on this orgone stuff (Jack Kerouac and William Burroughs were into it, apparently).

I also discovered that she is currently feuding with another, equally ridiculous, online cult called Amightywind. Yes, like the Christopher Guest movie. Which she claims is run by a witch.

So all the witches online seem to be rallying their covens and fake Christian ministries to protect fellow witch Barbara Rogers and come against me and paint the lie Steve wanted to die. Almightywind Witch Cult is run by a woman who was a witch in the Great White Brotherhood of Indiana, broke off from them to begin her own "ministry' online. She's been making hate videos about me for years. Steve was well aware of them.

The witch she is talking about is Elizabeth Elijah Nikomia and her husband Ezra, who say they are not witches, but prophets.

Amightywind/Almightywind are a Jews For Jesus Pentacostal Zombie Apocalypse cult. But like, instead of killing zombies with orgone, they kill zombies with boards.

I tell you this now so when you see these things come to pass you will not fear his army of ZOMBIES that will be slain by the POWER OF THE CROSS of YAHUSHUA ha MASHIACH! Remember hit them with a board or wood that represents the CROSS. The dead in YAHUSHUA (Christ) which shall walk and witness to MY Glory will walk as in times of old and testify of Heaven, not to take the MARK of the BEAST! They shall prove there is life after death. MY saints you will hear and see in Glorified Bodies that CAN NOT BE KILLED!

Also, they have more singing.

There are like, 85,000 videos from each of these groups, and then also videos of them decrying each other, and then other cults decrying them, and it is some kind of all out crazy YouTube battle that is so much better than any of the Mommy Blog Wars of the early 2010s. It is amazing. Also, BOTH cults have lions on their Geocities webpages? What does it all mean? And how have I never heard about any of this?

I am trying to figure out if there is any crossover here with the flat earth people. There must be, right? The laws of crank magnetism demand it.

OH. While looking for pictures of Sherry other than that first one, I also found the blog of this one dude who claims to have been created in a cloning center. I have not yet been able to discern if he is involved in this feud.

I can tell you that it definitely appears as though the Amightywind group does not like it when people criticize them, and has a tendency to make retaliatory YouTube videos against ex-members who have made YouTube videos warning people about them. It is all very, very involved. And the amazing thing is that it appears to all mostly be online. You don't even need to leave your house to be a cult leader anymore, I guess.

Obviously, this is just the tip of the iceberg here. There is so much. So if you feel like delving into this rabbit hole with me, together we can discover their secrets!