Someone Keeps Tricking Trump Into Partnering With Con Artists! 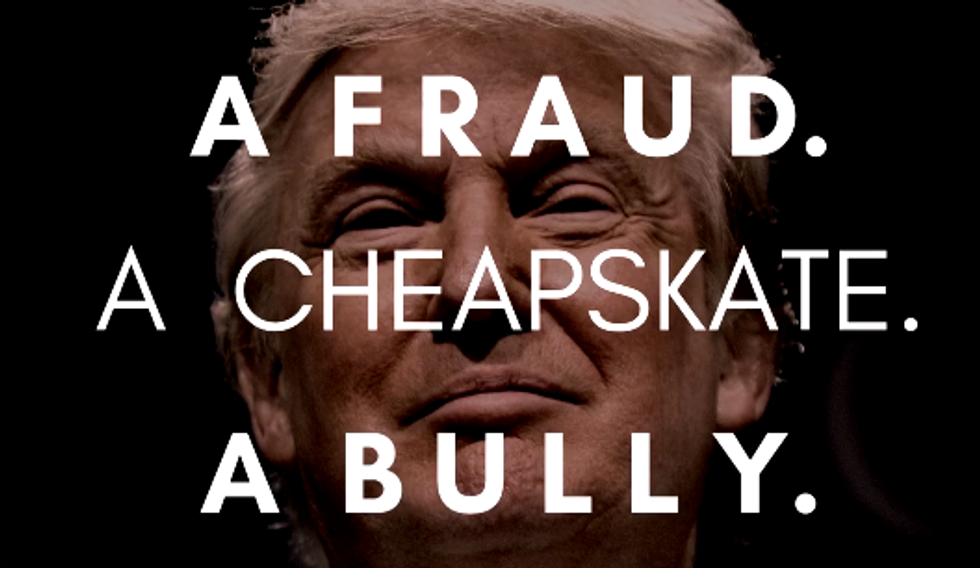 If Donald Trump's name is on a thing, it is probably a scammy thing. By now, we all know about the scammy and bad Trump University, where people spent all their money to learn a whole lotta scammy NOTHIN' about getting rich in real estate, and which is the subject of several lawsuits.

[wonkbar]<a href="http://wonkette.com/602538/donald-trump-yells-more-at-messican-judge-in-trump-university-suit-forgets-one-weird-trick"></a>[/wonkbar]Now, the New York Timeshas a new story about a different thing with Trump's name on it, called Trump Institute. As the Times explains, Trump actually owned Trump U, whereas he only stuck his scammy name on Trump Institute, one of those Get Rich Quick schemes where dumb people like that one uncle of yours (you know the one) would pour all their bucks into weekend seminars promising all the riche$ in the world, if you just use These Weird Tricks!

Take over for us, Times:

As with Trump University, the Trump Institute promised falsely that its teachers would be handpicked by Mr. Trump. Mr. Trump did little, interviews show, besides appear in an infomercial — one that promised customers access to his vast accumulated knowledge. “I put all of my concepts that have worked so well for me, new and old, into our seminar,” he said in the 2005 video, adding, “I’m teaching what I’ve learned.”

Reality fell far short. In fact, the institute was run by a couple who had run afoul of regulators in dozens of states and been dogged by accusations of deceptive business practices and fraud for decades. Similar complaints soon emerged about the Trump Institute.

Oh great, Trump didn't even run the thing. These other folks did, a couple named Irene and Mike Milin, who have been doing the Get Rich Quick shit for years, and whose "reputation was ... pockmarked with lawsuits and regulatory actions" FOR YEARS! For real, the Times reports that as far back as 1993, the Milins were accused of "taking customers’ money and running" by the Texas attorney general. Their track record does not get any better from there.

So these scamps sound lovely. Why did Trump decide to do business with Irene and her studmuffin of a hubby, Mike?

A Trump executive, Michael Sexton, told The Sacramento Bee in 2006 that there was a simple reason for going into business with the Milins: Their company was “the best in the business.”

HOLD ON, IT IS OUR SIDES THAT WE ARE HOLDING AGAIN FROM THE LAFFING. Know how we've been talking about what a shitty businessperson Donald Trump is? Apparently he's a bad judge of character too, imagine that, what a shock.

Here's another fun detail about Irene 'n' Mike's sexxxytime seminars where you don't get rich from shit, but Irene 'n' Mike (and presumably Donald Trump) do, because they run away with your money like common Palins:

[T]here was an even more fundamental deceit to the business, unreported until now: Extensive portions of the materials that students received after forking over their seminar fees, supposedly containing Mr. Trump’s special wisdom, had been plagiarized from an obscure real estate manual published a decade earlier.

Yes! Why use Donald Trump's "special wisdom" -- as if there is even such a thing LOLOLOL -- when you can just copy it out of a book nobody's ever read?

The Times story features a horror story from a Connecticut court reporter who says Trump Institute tried to take her money and run, even though she actually canceled her second visit to the seminar. It also features Susan G. Parker, the lady Trump Institute reportedly hired off Craigslist -- !!! -- to write the institute's curriculum. Parker says the plagiarism wasn't her fault, but that the Milins' former lawyer sent her all the source material she was supposed to use. That lawyer, a man by the name of Peter Hoppenfeld, says nuh uh, she did it.

Who's really to blame for all this scammi-tude and general creepiness? Susan Parker? The Milins? Donald Trump? ALL OF THEM, KATIE? Nah, we should probably blame Obama and Hillary, or maybe that mean Messican judge Trump's been so mad about lately.

Ivanka Trump lies like that thing on her father's head.

Ms. Parker said she did venture to one of the Trump Institute seminars — and was appalled: The speakers came off like used-car salesmen, she said, and their advice was nothing but banalities. “It was like I was in sleaze America,” she said. “It was all smoke and mirrors.”

Sounds like Donald Trump to us! He may not actually be a terrible businessman, per se. (Yes he is.) But he's definitely one of those awful moguls whose business plans basically consist of "Fuck people over, then run." Nice work if you can get it, and also if you have no soul.