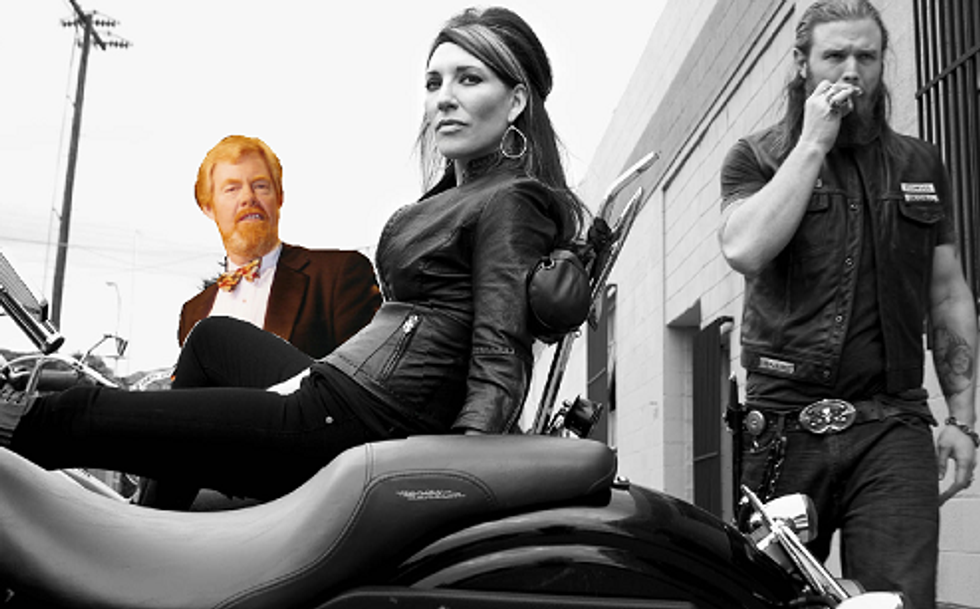 Kurt Sutter, the creator and producer ofSons of Anarchy, which we understand is a popular family drama about duck hunters and their loveable dog solving mysteries on a remote space station, was not especially impressed by some criticism leveled at his teevee program by rightwing morality scold and First Amendment illiterate Brent Bozell. Bozell, whose job is to have periodic aneurysms over liberal bias and moral outrages in the broadcast media, and then raise funds to fight them (the liberal outrages, not the aneurysms), wrote a dumb column Friday accusing "the left" of hypocrisy:

After the Newtown school shooting, commentators on the Left expressed outrage that gun-rights groups were exploiting the attack to build membership in the wake of all the liberal demands for a federal crackdown on gun owners. Nine months later, they’re curiously silent as Rupert Murdoch’s cable network FX milks a fictional Catholic school shooting for commercial gain.

Because of course, exploiting a tragedy in order to equate modest reforms of gun laws with Nazism and fictional violence in a teevee drama, nine months after a tragedy are pretty much the same thing. You might think there is a difference between the immediate aftermath of a tragedy and nine months later, but remember -- it took YEARS for Taxi Driver to trigger John Hinckley.

Won't someone think of the stunt doubles? Incidentally, the average person can't walk into an effects shop and buy the explosive squibs used to simulate gunshots on teevee...you need an explosives license. Thanks to the NRA, there's no such restriction for an AR-15 with real child-shredding bullets.

Bozell whined about the fact that the politicians who complained about the NRA in the wake of Newtown aren't similarly exercised about the multiple not-actually-deadly depictions of actors' deaths on Sons Of Anarchy, and warned that innocent children were inevitably going to be watching, because parents are too stupid to control their childrens' viewing without the help of fine conservative advocacy groups like the Parents Television Council (one of nine million rightwing groups Bozell runs). Because while the involvement of guns in massacres is simply an anfortunate result of there not being enough well-armed Good Guys, the effect of fictional violence is a threat that Congress really needs to do something about. Bozell said of Sutter, "Of course he has an agenda ... He has no morals and believes that should be accepted. That is his agenda."

Sutter was less than impressed. In a blog post, he replied to Bozell, calling him and his group "idiotic" and then some:

Anyone with half-a-cup of brain cells can filter out the noise of your conservative bellowing and hear the truth – it’s all about your own political agenda. You are desperately trying to create a lobby that matters. But you cannot. And it fucking kills you that after all these years, you and your hate club are still flaccid and impotent. And the reasons, sir, are quite obvious. You are not very bright, your message is archaic and loving parents can innately sense that the PTC has no heart and no real interest in the betterment of children.

You reek of McCarthyism and holy water. And right-minded folks can smell you coming a mile away ...

And just so you have something to quote from this, to work up the four other members, tell them that the tattoo-covered, liberal freak who writes that baby-killing, urine dunking show, said this: “You’re a pathetic fucking douchebag and I bet your own kids fucking hate you.”

Not bad, Mr. Sutter. We'll let you know. How are you with foreign policy humor?

[NewsBusters and WhoSay via RawStory]