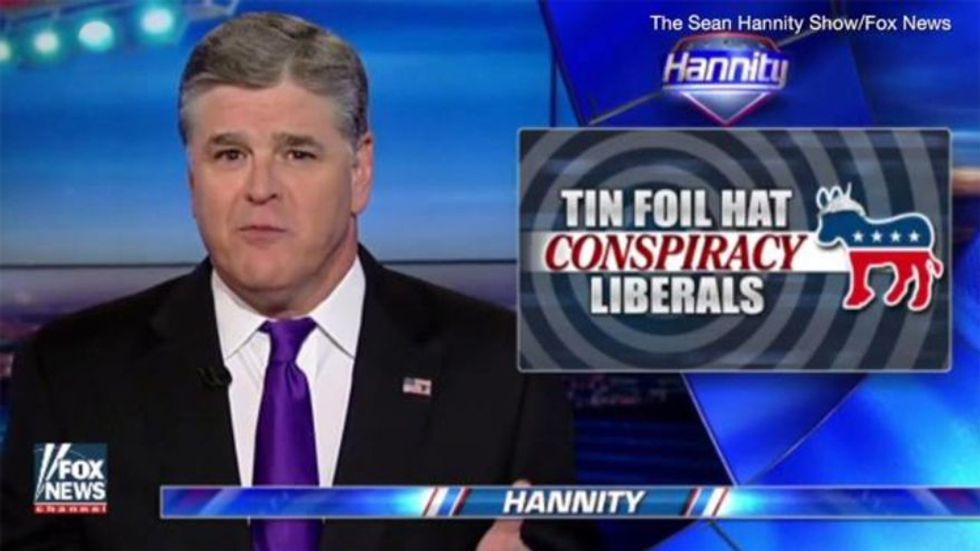 Poor Fox News. They've decided to stay faithful Orthodox Trumpians, which means the Trump-Russia story is fake news, which means Fox News simply isn't covering the story, and fewer Americans are watching Fox News. Tonight on Fox: Has Barack Obama hypnotized Americans again? To add insult to injury, the night of Roger Ailes's death last week, Fox finished dead last, as it were, in the cable news ratings for viewers between the ages of 25 and 54, the "demo viewers" most valuable for advertising. And Fox has been in third place with demo viewers for several weeks now. (Media Matters notes, "In terms of total viewers, Fox News does better, thanks to its large stable of viewers over the age of 54.")

If you can't trust a man who thinks roving gangs of lesbians with pink pistols are recruiting girls to go gay, who can you trust?

It seems that as the Trump administration keeps racking up scandals, people want to know more about the news, and since Fox is, like Donald Trump, still spending a lot of its time yelling at Hillary Clinton, the eyeballs are going to CNN and MSNBC. That, or George Soros is bribing Nielsen and all the other ratings agencies, which is entirely possible. At Breitbart, the reason for Fox's slip in the ratings was immediately obvious to commenters: The network has gotten too liberal, and allowed liberals in the Murdoch family to fire Bill O'Reilly just because the Murdochs own the network, as if that's even fair.

If you can't trust a man who thinks roving gangs of lesbians with pink pistols are recruiting girls to go gay, who can you trust?

And what's hottest on Fox right now? It's Sean Hannity's crusade to solve the July 2016 murder of Seth Rich, the 27-year-old DNC staffer who was either killed in a botched robbery in Washington DC, OR was executed in cold blood by Hillary Clinton's death squads, because of course that's the most obvious answer to most of DC's 66 unsolved homicides in 2016. The Daily Beast spoke to "nearly a dozen" Fox News "reporters, pundits, and hosts" and found them almost universally whomper-jawed at Hannity's obsession with the Rich murder, which took on new life in the wingnuttosphere last week when a quickly debunked story claimed new evidence had surfaced suggesting Rich had leaked DNC emails to Wikileaks.

The Foxxers told Daily Beast reporters Andrew Kirell and Asawin Suebsaeng they found Hannity's fixation on the Rich nonstory "embarrassing" and needlessly cruel to Rich's family, who have asked Hannity via their spokesman to please stop "[manipulating] the legacy of a murder victim in order to forward their own political agenda.”

Here is our favorite paragraph from the Daily Beast story:

“ARE WE STILL AIRING THAT SHIT?!” one Fox News political reporter, who says they are furious that the conservative cable-news giant is entertaining the conspiracy theory, messaged The Daily Beast when informed of recent coverage.

It almost sounds like that reporter woke from a night of uneasy dreams to find they had been transformed in their bed into a hideous insect. Who works for Fox News.

Other great reactions from people who seem not to be aware they even work at Fox News:

“The other reporters I’ve talked to [about this] are similarly pissed about the whole thing,” another Fox reporter said. “Some find it embarrassing, others downright heartless [to spread this].”

Another news reporter said he is “befuddled” that the network hasn’t intervened to decisively put an end to Hannity’s incessant support for, and coverage of, this particular conspiracy theory.

And finally, this, from one of the few sources the Daily Beast talked to who actually appears to have noticed the Fox News logo on their own coffee cup:

“Mostly we’re keeping our heads down,” one politics reporter told The Daily Beast.

“I mean, have you seen some of the stuff we put on air?” the reporter continued.

And the Seth Rich story refuses to go away, because Congress and the intelligence community still haven't shifted their focus from Russia to the DNC murdering a low-level staffer. Despite the source of last week's "revelations" telling CNN he'd been fed the new evidence by a reporter at a Fox affiliate, Newt Gingrich has hopped onto the feeding frenzy, confidently telling the Fox & Friends weekend crew,

We have this very strange story now of this young man who worked for the Democratic National Committee, who apparently was assassinated at 4 in the morning, having given WikiLeaks something like 53,000 emails and 17,000 attachments.

Which is 100% accurate apart from there being no evidence Rich was assassinated, or that he had given Wikileaks so much as a wet digital fart. Hannity has also roped in his old pal Geraldo "Mister Credibility" Rivera, who Tweeted the basics of the case just yesterday:

So that's three sources who all think something's mighty fishy here, or at least they did until they could go into full Muslim Panic mode following the suicide bombing in Manchester Monday night. Geraldo is now freaking out about all the Muslims in Manchester who became a single bomber, but Hannity has stayed true to his mission of exposing the conspiracy. On Sunday and Monday, Hannity was simply oozing Tweets about Rich:

So it only stands to reason that when New Zealand blogger "Kim Dotcom" promised shocking revelations Tuesday, Hannity was thrilled, telling his followers "Wow. PLEASE READ ASAP" Tuesday. The astonishing true truth? It's actually no proof at all, but Kim Dotcom promises to tell all he knows, to U.S. authorities, if special counsel Robert Mueller -- sure, why not him? -- guarantees him safe passage and won't let the FBI or Hillary kill him. And maybe brings him a nice shrubbery. Also, he talked to someone online named "Panda," and Seth Rich used a Twitter handle that included "panda," so clearly they had to be the same guy -- what are the odds of someone on the internet including "panda" in their username, after all?

At least Fox News has finally taken a strong editorial stance: Today, they issued a statement saying their May 16 story on Rich's murder -- based on reporting from Fox affiliate WTTG -- "was not initially subjected to the high degree of editorial scrutiny we require for all our reporting" and has been removed. The statement makes no mention of Hannity's ongoing obsession with the story, even though both the network and the affiliate are backing away from their earlier claims. Seth Rich's brother Aaron has issued a plea to Hannity to drop the story, too, which just means the brother is in on the conspiracy, obviously.

For its part, WTTG added a note to its May 15 story saying that the statements of private investigator Rod Wheeler "are in clear contrast to" statements he made to other outlets later, and that after Wheeler backtracked on the statements he'd made to them, he hasn't returned their calls or emails.

Probably because he's too busy running from Hillary's assassination squads.

Conspiracy hounds are waiting for more details. They will probably be waiting quite a while, after which they can moan over how craftily Hilary covered her tracks. And until then, they can watch Fox, which seems in little danger of running real news anytime soon.

Update: Well, imagine that! The Daily Caller has deleted its Seth Rich story, too.

Yr Wonkette is supported by reader donations. Please click the "Donate" clicky, or even more people you don't want to know about will start running with this dumb conspiracy.