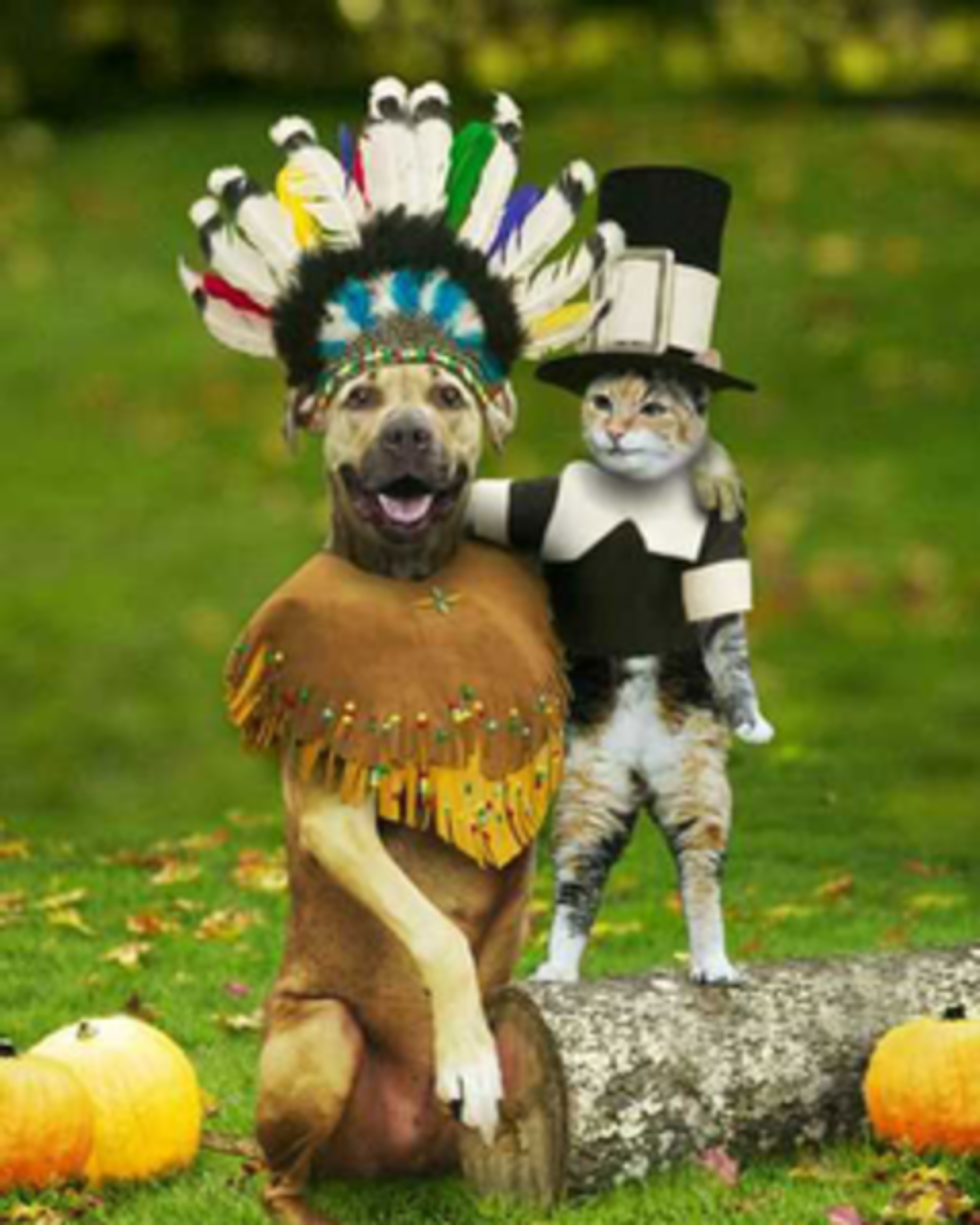 It's Thanksgiving weekend, so as we gather together with (or hide from) our families, however functional or dysfunctional they may be, let us remember the true meaning of any American holiday: It's an opportunity to pound home a political lesson about why We Are Good and They Are Bad. It's a revered grim tradition: You serve Susan Stamberg's socialist NPR cranberry relish, and your Teabagger brother-in-law recites how the settlers of Plymouth Plantation nearly starved because they had socialism forced upon them, but finally prospered after they became capitalists. Here's a fairly typical version of the story that was emailed to our tip line in 2012; the story was also a favorite of Rep. Todd "Shut that down" Akin, and in 2013, Rush Limbaugh wrote a best-selling children's book promoting the same fantasy.

Happily, there are several good debunkings of this idiocy, although they probably won't carry much weight with the right, since the debunkings come from the radical communist New York Times and the Marxist-Trotskyist-Muslim-Antifa Right Wing Watch. In 2014, crypto muslimfascist organ Slate also took on the topic, calling it a "strange and persistent right-wing myth," and adds a useful Origin Story -- it apparently got started in 1968, with a holiday piece by cold warrior columnist Henry Hazlitt. Should culture war break out while you serve the leftovers, you may just want to say you got your rebuttals from Paul Harvey. Then when they go to look it up on their smartphone, you can spill gravy on it. Be sure to apologize. (We got that tactic from Saul Alinsky.)

According to one revisionist version of Plymouth Colony, the Pilgrims' basic error was in trying to live like the original Apostles:

The original colony at Plymouth Bay had been founded by Puritans who hoped to emulate the early Christians by keeping all their worldly goods in common. They forgot St. Paul’s admonition that only those who worked should be fed from the common store.

Most other versions leave out any mention of Biblical sharing (which might raise uncomfortable questions about that Galilean redistributionist anyway) and present the Pilgrims as victims of "a short-lived form of agricultural communism" imposed upon them by their sponsors back in England (BOOO!); in any case, the scheme soon failed because under socialism, nobody had any incentive to work:

This system quickly failed. The women described the communal chores as a form of slavery, men rapidly lost motivation, and the able-bodied feigned illness to avoid work.

And there are even some selective quotes from Governor William Bradford's journal that say so!

"For this community [so far as it was] was found to breed much confusion and discontent, and retard much employment that would have been to their benefit and comfort. For young men that were most able and fit for labor and service did repine that they should spend their time and strength to work for other men's wives and children without any recompense."

Finally, after everyone nearly starved, Bradford threw out communism and gave each family their own parcel of land to work, and then even Nature rejoiced by bringing forth a bountiful harvest, YAY individual initiative!

Oh, and there were some Indians. Let's not get into that. (OK, maybe a little. In the first version of the story we ever encountered, here's the sole mention that the Wampanoag lived nearby: "It was so bleak that some Pilgrims sold themselves as workers to the Indians for a few cups of food." Happily, the baggers stop short of suggesting that this example was where slavery came from.)

Except, maybe that's all a lot of hooey? For one thing, the first three-day Thanksgiving feast occurred in 1621, while the "socialist scheme" -- which Bradford called the “common course" -- was still very much in effect. The actual division of land into single family plots only came in 1623, a detail that some versions of the wingnut story find it useful to lie about; John Stossel actually moves the year of the first Thanksgiving to 1623, which seems rather unsporting. In any case, the original motivation for pooling resources had nothing to do with socialist ideology:

the plan was in the interest of realizing a profit sooner, and was only intended for the short term; historians say the Pilgrims were more like shareholders in an early corporation than subjects of socialism.

“It was directed ultimately to private profit,” said Richard Pickering, a historian of early America and the deputy director of Plimoth Plantation, a museum devoted to keeping the Pilgrims’ story alive.

Former Foreign Policy editor Joshua Keating explains further that the common holding of land was not socialism, but instead was very much intended to make money -- a joint venture, not an anarcho-socialist collective run by scruffy proto-Marxists named Dennis:

Communal farming arrangements were common in the pilgrims’ day. Many of the towns they came from in England were run according to the “open-field” system, in which the land holdings of a manor are divided into strips to be harvested by tenant farmers. As Nick Bunker writes in 2010’s Making Haste From Babylon: The Mayflower Pilgrims and Their World, “Open field farming was not some kind of communism. All the villagers were tenants of the landlord.”

There was no local baron in Plymouth, but it was a commercial project as much as a religious one, and the colonists still had to answer to their investors back in England. It was this, not socialist ideals, that accounted for the common course. Bunker writes, “Far from being a commune, the Mayflower was a common stock: the very words employed in the contract. All the land in the Plymouth Colony, its houses, its tools, and its trading profits (if they appeared) were to belong to a joint-stock company owned by the shareholders as a whole.”

Adds Keating, "the Rush Limbaugh crowd should note that the settlers at Plymouth were rebelling against the rules set by a corporation, not against the strictures of some Stalinist collective farm or a hippie commune."

Oh, and the whole famine thing? Conditions were definitely hard, especially for settlers unaccustomed to decidedly non-English climate and growing conditions. But no, not famine:

The arrangement did not produce famine. If it had, Bradford would not have declared the three days of sport and feasting in 1621 that became known as the first Thanksgiving. “The celebration would never have happened if the harvest was going to be less than enough to get them by,” Mr. Pickering said. “They would have saved it and rationed it to get by.”

The competing versions of the story note Bradford’s writings about “confusion and discontent” and accusations of “laziness” among the colonists. But Mr. Pickering said this grumbling had more to do with the fact that the Plymouth colony was bringing together settlers from all over England, at a time when most people never moved more than 10 miles from home. They spoke different dialects and had different methods of farming, and looked upon each other with great wariness.

“One man’s laziness is another man’s industry, based on the agricultural methods they’ve learned as young people,” he said.

Stupid historians, with their "context." Can't they just recognize socialism causes laziness? People never help each other unless you pay them to!

Not surprisingly, wingnuts know as much about history as they do about how the US Constitution works. And if you want a good read about the Massachussetts Bay colony's early days -- the guys who came a bit after the Pilgrims -- go read Sarah Vowell's The Wordy Shipmates. Good luck with your post-holidaying, and may you and your teabagger relatives enjoy the warm embrace of family, if not a shared understanding of reality.

(You didn't really think we'd get through this without Ponies, did you? Silly.)

Special Postscript, added in 2014: In July 2014, we received a very important comment in the ol' Dear ShitFerBrains queue, in reply to the 2013 version of this column. We held onto it just so we could append it to this post. Someone with the not-at-all pompous username "historyshowsus," a Breitbart aficionado from the days when that site still used IntenseDebate, just wanted to let us know that everything we wrote is wrong, wrong, wrong. How's this for a rebuttal?

I'm sorry but the VERY prestigious economics institute (Von Mises Institute) disagrees with your liberal refutation of HISTORY and the actual journal of Gov Bradford himself. This article is a lie and is so typical of the manipulation of history that is fed to our children in order to feed the leftist agenda. http://mises.org/daily/336

You'll never guess what's at that link! Yep, a 1999 reprint of a 1985 version of the very same myth that we just debunked, citing the Bradford journal out of context, claiming that common land ownership was socialism (not a freely-agreed-to contract), and insisting that only Private Property and Individual Initiative saved the Pilgrims (it does at least get the date of the first Thanksgiving right).

In other words, dear Wonkette: Your corrections of the myth are actually incorrect because a Very Prestigious Libertarian Organization published the original myth nearly 30 years ago, and they are very prestigious, you indoctrinated liberals!

C'mere, "historyshowsus." You look like you need a hug from Pinkie Pie.

Yr Wonkette is supported by readers like you! Please click here to send us money, for socialisms.