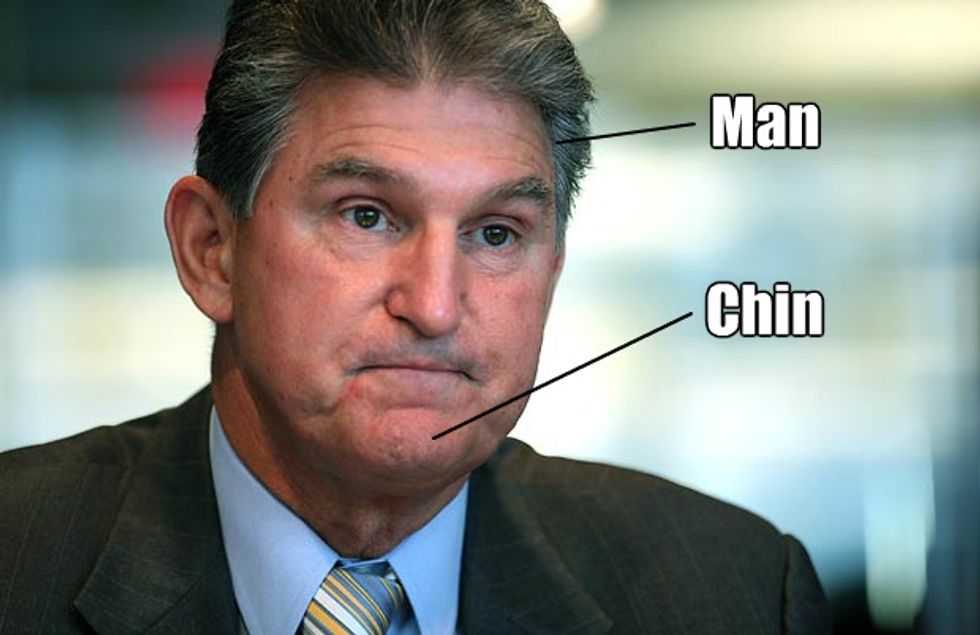 Sen. Joe Manchin, the charming West Virginian who enjoys shooting pieces of paper and secretly wearing Republican undergarments, explained in an interview with Politico that he simply will not tolerate fellow Democrats who might try to obstruct the Republican legislative agenda. Quoth the nominal Democrat,

After all, the Republicans are still going to allow Democrats to keep coming into the Senate chamber, at least for now, and you know what that means? It's hospitality. And you can't piss on hospitality! He won't allow it!

Betting is open now on whether Manchin will actually wait for the Ascension of Mitch to switch parties, or if he'll wait until closer to his term is up in 2016.

It's completely unclear whether Manchin will actually have the opportunity to avert any potential Democratic obstruction of the Republican whirlwind, of course, considering the spineless whimpering noises many Dems are already making, and also given the likelihood that the GOP already has a monopoly on obstructionism. They may control Congress, but lord knows there's no certainty that they plan to actually do anything with it. For instance, consider Alabama Sen. Jeff Sessions, who wrote an op-ed -- also for Politico -- threatening that if President Obama takes any executive action on immigration, then maybe it's time to shut down Bartertown and refuse to keep the government funded:

After all, everybody remembers what a stunning success shutting down the government was in 2013, when Ted Cruz got Obamacare repealed. Oh, but this is totally different, say people who think Sessions has a winner. That time, Republicans held their breath and choked the national budget to try to repeal an existing law, while this time, "they'd be using it to maintain the law as it's currently being enforced." Except, of course, that they'd still be shutting down the whole government to try to get their way on one policy -- just one that was implemented through an executive order, which somehow makes it a winning strategy.

"Why would any member of Congress who opposes executive amnesty provide President Obama the funds to carry it out? A Republican majority must force congressional Democrats to answer this question through their votes," Sessions wrote.

He added: "We cannot yield to open borders. We cannot let one executive edict erase the immigration laws of an entire nation. If we believe America is a sovereign country, with enforceable boundaries, and a duty to protect its own people, then we have no choice but to fight and to win."

Memo to Joe Manchin: looks like you won't have to block any Democratic obstruction of the Republican agenda. The Republicans already own the obstruction brand, and they don't need any help.