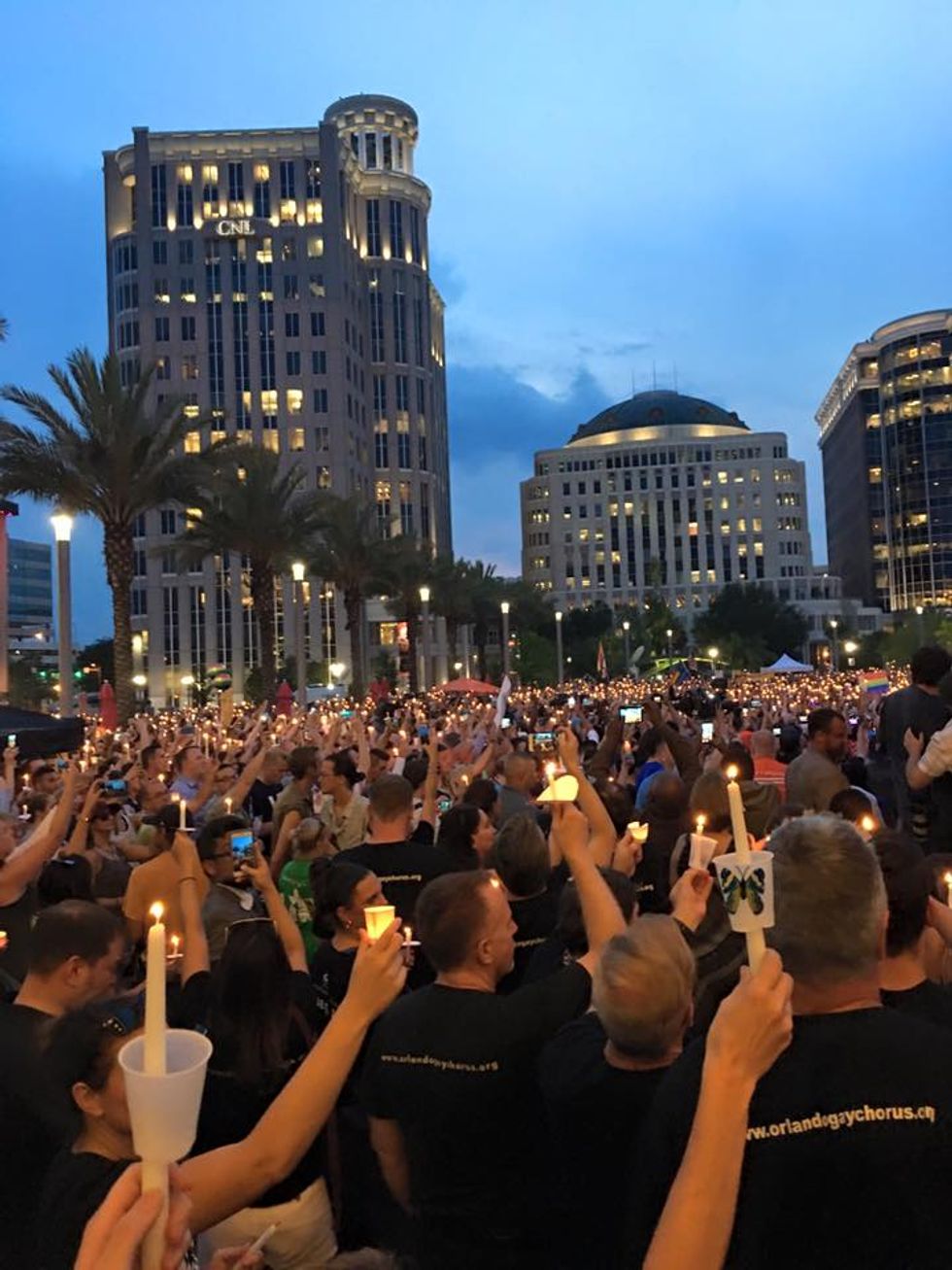 Vigil in Orlando for the victims of the attack on Pulse. We will not be showing the shooter's fucking face.

In news that comes as no surprise to any member of the LGBT community, it seems that Omar Mateen, the deranged fuck who murdered 49 people at the Pulse gay nightclub in Orlando, may have been the teensiest bit of a gi-normous closet case. WHOA IF TRUE and WE ARE FOR SHOCK!

At least four witnesses told the Orlando Sentinel they recognized Mateen from the [Pulse], where they said he often sat alone and drank in a corner before becoming belligerent. Sometimes, they said, he’d angrily talk about his family. A former classmate of his police academy class came forward alleging that Mateen once asked him out and that they and others often visited gay nightclubs together. [...] In an interview with Brazilian TV station SBT, Mateen’s ex-wife, Sitora Yusufiy, and her new fiancé, offer some further details. Marco Dias, who is engaged to Yusufiy, said she believed her ex may have been homosexual and that Mateen's father had called him gay in front of her.

A witness said he had seen Mateen at Pulse "at least a dozen times," sometimes sitting by his lonesome, and sometimes getting shitfaced and belligerent, and also bitching about his dad. Another witness confirmed that "It was definitely him. He'd come in for years, and people knew him."

On top of that, it's reported that Mateen was a user of gay dating apps like Grindr, Adam4Adam and Jack'd. (And a creepy user, at that.)

Now, is it possible that Omar Mateen visited Pulse on a regular basis and used hookup apps for a couple or three years, so that he could use his photographic memory to plan the most precise mass shooting possible? We guess!

Here is a better theory of this murderous fucking coward:

Mateen was born into a family that taught, for religious reasons, that homosexuality was evil. When he realized that he, deep down, was like those people, it set off a cycle of internalized shame that became the never-ending battle of his life. He married two different women, and had a child, because in his subconscious he believed that living on the straight and narrow, doing the "normal" and "godly" thing, would kill the gay demons inside him. It didn't work. Nothing worked. He walked a thin dividing line of doing The Right Thing on one side, and then often (or occasionally or all the goddamned time) he "fell off the wagon" on the other side of that line and went to gay clubs, used Grindr, and probably had some gay sex that made him feel intense shame. It drove him crazy, and instead of handling it in a normal, adult way, he let his rage boil over to the point where he bought (legally and easily!) an AR-15 and a handgun and decided to go to Pulse -- where the part of him he was taught to regard as "sick" may have felt at home -- and he opened fire.

How's that for a theory? Could we be wrong? Sure, of course. Maybe this is all a huge coincidence and, like Stupidest Homosexual On The Internet Jim Hoft seems to think, this an elaborate ruse by a tricky, tricky ISIS operative, perpetuated over years.

(Fun fact: If "pledging allegiance to ISIS" was actually a factor here in any real, deep way -- and it may have been! -- it's a bit odd, because Mateen also had signaled that he supported Hezbollah. ISIS is Sunni. Violently so. Hezbollah is Shi'a. Those groups are not actually on the same side, so our guess is that even if he was recently radicalized, he didn't know what he was fucking talking about.)

And here's the thing. We are waiting with bated breath for some secretly cum-guzzling religious right leader to point and say "SEE? Not only was it an Islamic attack, but the killer was a depraved homosexual! That's why he murdered, because homosexuality is eeeeeeeeevil!"

But that's not it, at all. You see, American religious right leaders and mouth-squawkers of all the Abrahamic faiths are on the hook for this one, if our theory is correct. Mateen's own father is virulently homophobic, having recently commented that his son shouldn't have murdered all those people, because God woulda punished them anyway. How is that different from the Orthodox Jew who posted a video saying Mateen's murders were kinda OK, due to how the victims were all queers anyway?

And how is that different from the long, long line of Christian religious right leaders who have blamed gays for 9/11, have said they deserve all the AIDS they get, that all gays are pedophiles, that transgender people wanting to take a goddamned shit are going to rape YOUR WIVES AND DAUGHTERS? It's not, is the answer. It's just fucking not.

And for an American Muslim man, who has been taught day in, day out, that what he knows to be true about himself is evil, is the very antithesis of godliness, to absorb these messages and never, ever, EVER be able to make his gayness go away ... well, that's a pretty toxic recipe for what happened in Orlando this weekend.

In short, he may have murdered in 49 people that which he could not murder in himself.

Is this meant to elicit sympathy for that motherfucker? Jesus Christ, no. His personal pain is one thing, but what he, an autonomous man, chose to do with that pain, is another thing entirely, if our theory is correct. Because millions of LGBT people have grown up in homes and places of worship that told them they were evil, shameful sinners bound for hell. Some break the chains and come out, and go on to live happy lives. Some break the chains but still struggle with the shame inflicted upon them for decades.

[wonkbar]<a href="http://wonkette.com/602886/are-the-orlando-gay-club-shootings-about-you-or-should-you-stfu-a-wonksplainer"></a>[/wonkbar]Others, sadly, end up on the streets, or addicted to drugs, or in terrible cases, take their own lives because they can't handle it. (Those LGBT suicide statistics we see all the time? Rejection and shame inflicted by family and society is part of that! To which the religious right replies, "It's because they know in their hearts that they are shameful sinners." For real, they say that.)

But in this case, probably allegedly most likely, this asshole chose to mow down people who were able to fucking deal with that which he couldn't.

Sympathy? Fuck you. But at least it makes more sense now.